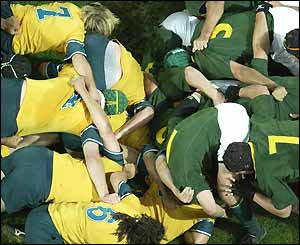 Here it is – the first big Wallaby hit out in the Aussie Robbie era, and what a test it’s gonna be. The world champeen Springboks have just re-inforced their top-dog status with two matches out of the top drawer, the second earning them their first win on NZ soil for 10 years. As for the Wallabies, we’ve had flashes of brilliance, but some big questions remain unanswered.

So who’s gonna do it in Perth?

Well, I reckon all the clues are written above. It’s difficult to imagine the impact of two hard fought test matches in two weeks on the other side of the earth to home, a well deserved piss-up and then a trip right across terra Australis to front up again within the same 7 days. Plus, in the psyche will be that they’ve played their big match and taken their big scalp. Just hold the rest of their home games and that should be it for this Tri-Nations. Happy daze.

But this doesn’t mean it’s gonna be easy for the Wallabies. The two softest parts of our game – the breakdown and scrum – are selling points for the Saffas. The scrum I reckon just might hold. It’s home turf, they haven’t been on top form and its the beginning of the comp – we always seem to get away with it then. [UPDATE: The Boks have opted for a whole second front-row on their bench, signalling where their focus is. I’ve also heard conflicting reports about wet weather forecasts. The scrum could be more of a factor than I’d hoped]

It’s the breakdown that worries me the most. I haven’t seen a convincing game here since before the RWC, even against the holidaying Frogs, and the likes of Burger and Botha are in wrecking ball form. This is the time for Palu to finally step up onto the big stage and Horwill re-discover some inner mongrel. If they don’t then with the ensuing crappy ball and offside Jaapies it’s going to be even harder to break the strangle hold of the rush defence. We saw where that got the ABs last weekend.

With what we’ve seen so far this should be a close game, the fresher Wallaby legs getting them through by 5 points or so. If it’s more than that, then the Boks obviously enjoyed the celebrations in Christchurch. If the Wallabies don’t do it then its game over Tri-Nations.