Lunch with Larkham - By Coatsie - Green and Gold Rugby

What I failed to mention in my first/last post was I come from Terrey Hills Rugby Club, in the hinterland behind Sydney’s Northern Beaches. We are a little club with a reasonably good following with a great club spirit and social atmosphere. Being a single sixth division team (and not even that this season unfortunately) we are very much the proverbial “Drinking Cub with a Rugby Problem”.

Bi-annually we hold a guest speakers luncheon fundraiser, which have always proved to be a success financially and socially. Past functions have included speakers Allan Jones, David Campese, Peter Fitzsimmons (dammit; missed that one he said with a thick layer of sarcasm), and Enrique “Toppo” Rodriguez. On that last occasion we also heard from Lachlan MacKay who is a former junior of our club. Prior to Lachy, our most famous exponent was Skippy the Bush Kangaroo, but of course he was a Kangaroo and not a Wallaby (boom-boom).

To be honest I’m afraid as a member of the club committee we each spent a great deal of the afternoon running errands, selling raffle tickets and such, so with a beer in hand naturally there were a few distractions, and I can’t clearly recall each answer Steve gave.

I will say the most amusing tid-bit was he shared his and Greeg’s nick-names for one another: Gregan’s for Larkham’s was Smeagol after the CGI created “Lord of the Rings” character. Being an artist and illustrator myself I can see the comparison; a prominent upper-lip and smaller nose, a good laugh which brought the house down. Steve then shared his for George; Tumbleweeds. Because “…every time the guy cracks a joke, there’s silence save for a gust of wind and a tumbleweed which blows through”.

Another good laugh, but it was all far from all jokes. Bernie talked at length about how growing up attending a modest ACT Public School, coached by his father and making rep-sides he always admired George. Larkham was of course a half-back originally, before becoming a utility back and of course arguably one of the greatest five-eighths the game has seen. But it was in almost an apprenticeship to Gregan; as a second half back – back up to Greegan he learnt a lot about the game. He said that George was the player he most admired in his early career, and that he felt like he’s really made it when Greegan sought him out after a Kookaburras game to shake his hand.

I doubt whether either of them could have imagined the impact they would make not only as individuals but as a halves-combination on Australian and indeed world rugby.

Inside Rugby host Greg Clarke MC’d the event, and as he had on the occasion of the previous luncheon in late 2005, did an excellent job. Greg, like Steve Larkham is also a very personable and professional bloke.

And hopefully both take a very hot bath.

Horses for courses in my view: (I believe there is a precedent for ‘Blondes on Blacks’ in the adult entertainment industry). The real laugh came however when Clarke recalled an interview during the season, which may have been conducted by Phil Kearns if memory serves me. When asked what Kellaher did on a typical evening on tour he responded “Just the usual stuff, team meetings, a meal, a couple of bluey’s and off to bed”.

Perhaps the guy should be introducing himself as an All Black & Blue..?

No doubt all part of Greg Clarke’s repertoire of public speaking anecdotes, but thoroughly enjoyable.

What was really interesting was hearing a Wallaby acknowledge the All Black’s RWC choking hoodoo. Bernie stated quite openly that they certainly play on that, as they did in the last world cup semi, which I see you have linked to your site – well done.

Being the gag-man I fancy myself as I had a beauty planned for him in the question time segment of the afternoon. 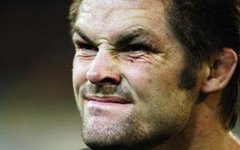 Bernie had a good laugh as I hoped he would, but characteristically gave the honest answer that, yes, he is a cheat and it looks as if the world cup will be a tournament where the refereeing fraternity have got his number. This of course snaffled the second part of my question, and I had to think fast. I mentioned how a lot of the media and opposition coaching staff claim he literally holds the opposition on top of himself inside their 22.

A lame question got a great answer which was that yes, it’s definitely a tactic which McCaw is using, and again he’s getting caught for it. Bernie elaborated by saying that

“George (Smith) and Phil do exactly the same thing – they’re just better at it”.

The Wallabies have been training locally at Manly Oval this week with ironically an injury ‘scare’ to Stephen Larkham. According to media reports which I’m confident you can trust about as far as you can drop punt an Emu, it was a rolled ankle which pulled up fine the following day. In his typical laconic form Bernie laughed off the media’s suggestion it was a ‘World Cup Scare’.

I had considered popping down to training, along with all the other rubbernecks for a look but decided against it. I didn’t want Bernie to think I was some type of creepy stalker come rugby tragic who thinks after a lunch and a little banter we are excellent friends. After all those calls I made to his hotel room I don’t think he wants that kind of friendship.

I am of course joking but I wouldn’t be surprised what kinds of kooks and groupies these blokes must have hassling them.

Bee excellent to each other

If you’ve got an anecdote about a Wallaby then let us know.