As a great way to learn about how other countries view their teams (and give you the edge in forthcoming pub discussions) we set a select group of Rugby bloggers the task of putting forward 5 reasons why their team will win The World Cup.

Being our group rivals, lets start with Ireland and a perspective from Conor at The 99 Call blog.

Reasons why Ireland will win the World Cup: 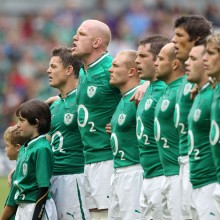 To be sure (©INPHO/Billy Stickland)

1. Element of Surprise:
With their dismal warm-up games which gave nothing away tactically, they may take the world by surprise. While we all know exactly what Australia can do after the Tri Nations games where they threw everything they had against New Zealand, we didn’t reveal a single back line move in our warm-up!  (where is the sarcasm symbol?)

2. Experience:
Ireland are the eldest squad competing in this World Cup, average age of 29. This ‘Golden Generation’ group of players have won 3 from the last 4 European Cup competitions, and were Six Nations Grand Slam winners two seasons ago, it’s time to take this success to the next level and win a World Cup.

3. Last chance saloon:
The majority of this same group of players are playing in their last World Cup and will want to go out with a bang, the psychological scars from Ireland’s disappointing performance in the 2007 competition are still fresh in their memories.

The Tank on a rumble

4. The Tullow Tank:
Every World Cup has a player that stands out from the rest and captures the minds of rugby fans worldwide, I think this tournament Sean O’Brien could be that player. The explosive Leinster back-row, named European Player of the year 2011 is crucial to Ireland’s success and if Ireland properly support and utilize him, he can change games.

5. Support:
Official figures of how many Irish fans are traveling are patchy at best, latest estimates are 5,000 traveling, but this group is dwarfed compared to the amount of Irish fans that are already in New Zealand and Australia that will be attending the games. Irish games were the second fastest selling games behind the hosts New Zealand. Lets get the party started!