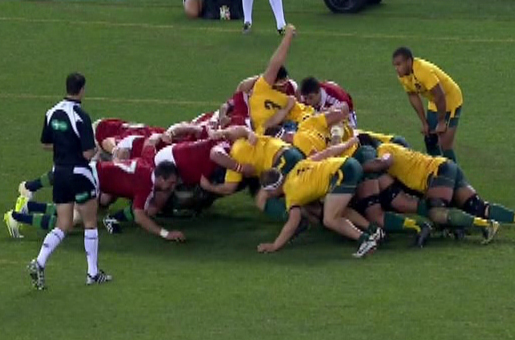 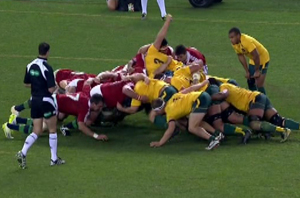 Vunipola gets outside Alexander

In part one of this article I looked at some of the horizontal angles involved in scrums, the importance of body shape / height and how those points are relevant for the Wallabies scrum against the Lions.

With apologies in advance to Nutta, who was adamant in comments on part one of this article that I had to stop revealing secrets, I’ve got some more secrets to share today.

I’ll post part three of the article on Friday looking at why the flankers are so important to props and what the trial laws being introduced next season will mean for scrums.

As I showed in part one, the loosehead effectively ‘dives’ under the tighthead as they engage and then drives forward and up to disrupt the tighthead. It’s not an easy manoeuvre and only experienced looseheads are capable of doing it well. 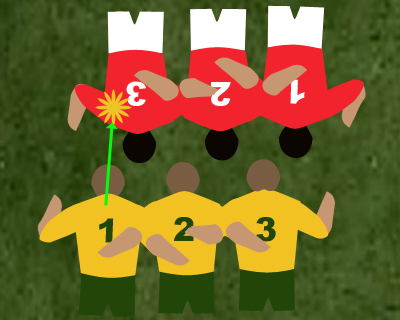 With their head in this position as the loosehead lifts up their head can slip outside the tighthead’s body which leaves them with nothing to push on and they can’t transfer any force through to the tighthead.

Alternatively if the loosehead’s head stays under the tighthead’s right shoulder their upward movement rolls the tighthead in towards the middle of the scrum rather than up. We saw Alexander being rolled up and in by Vunipola in the second test but I’ll go into more detail about what was happening in those scrums shortly.

If either of these things happen there is a good chance the referee will take the view that the loosehead is pushing illegally and penalise them. 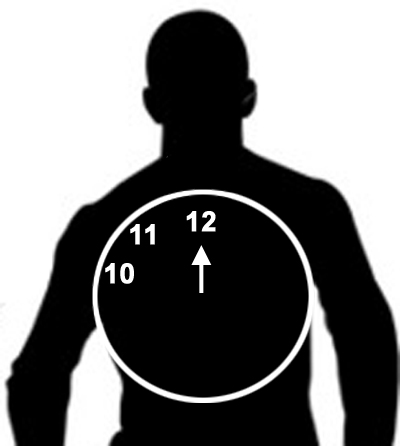 Aim for a loosehead is to engage at 12 o’clock

As I mentioned earlier, if the loosehead engages straight forward from their setup position the back of their head will end up somewhere between the 10 o’clock and 11 o’clock positions. To get across to the 11 o’clock or 12 o’clock positions and therefore be more effective with their drive looseheads normally setup angled in as shown below. 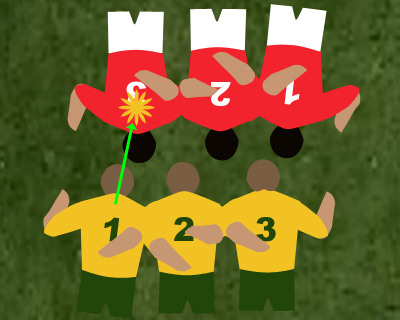 Yes, this requires the loosehead to angle in illegally

This means the loosehead drives in on angle, which is of course illegal. However, this tactic is used by all top level teams and referees don’t penalise it (maybe because they don’t know what the loosehead is up to).

The use of overhead cameras reveals a lot about what happens in scrums and I’ve included some examples in the video below – here’s a screen grab from an overhead clip in the RWC 2011 match between the Wallabies and Wales. 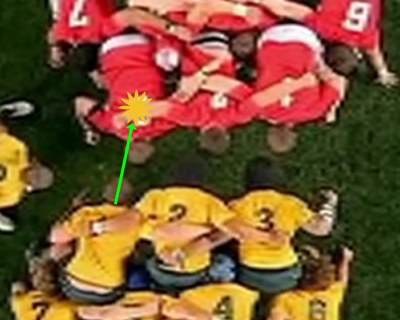 Overhead cameras reveal so much

The loosehead sets up this angle by bringing their shoulder in behind their hooker’s shoulder as they bind. This bind between the loosehead and the hooker is the pressure point the tighthead aims for as he engages and drives forward. As well as getting the loosehead into position to angle in this binding tactic makes it much harder for the tighthead to break their bind apart.

It also reduces the space for the tighthead to put their head into which creates the head to head arguments you see between looseheads and tightheads as they get ready to engage. You’ll often see referees pull scrums up before they engage to sort this head to head issue out. 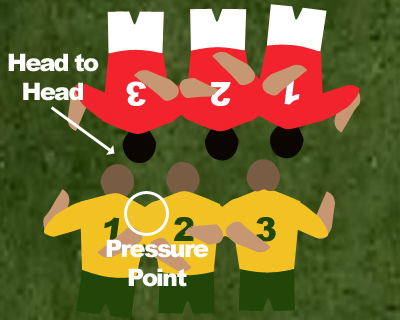 It’s the loosehead that causes those head to head disputes

On page 2 I’ll look at the performances Alexander and Vunipola in the second test together with tactics for the third test.

Clash of the Jerseys: the history of Red v Gold
Selection shocks: Smith IN, O’Driscoll OUT