THE AWFUL TRUTH ABOUT THE ARU’S FINANCIAL POSITION – PART 1 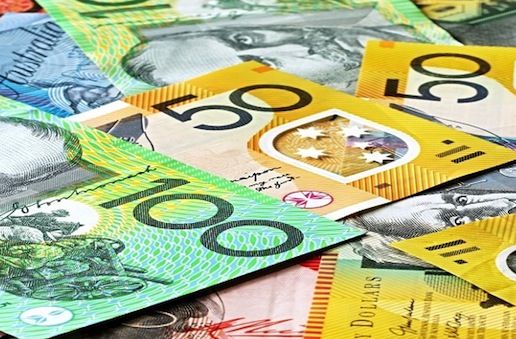 THE AWFUL TRUTH ABOUT THE ARU’S FINANCIAL POSITION – PART 1

This week we saw the release of the 2012 annual report for the ARU which includes information regarding rugby performance, financial performance and governance. In it the ARU reported a loss of $8.3 million for 2012. It turns out that not only is this not the true magnitude of the ARU’s shortfall, there are also far more worrying financial trends underlying these losses that we should all be aware of.

Every organisation, be they a business or a sporting organisation, looks for the positives in results and for the future and the ARU is no different. In terms of rugby performance there is a focus on participation rates in Australian rugby surging by 24% in 2012 to record levels (see the REAL participation figures here) and brave performances by the Wallabies despite an horrific injury toll – financially there is a focus on increasing revenue but it’s hard to ignore the losses that have been reported – from a governance point of view the focus is on the changes to the ARU governance model last year and the benefits that will bring to Australian rugby in the future.

You wouldn’t expect the ARU to come out with press releases focusing on the negatives – their job is to talk up the game but let’s not kid ourselves that things aren’t too bad – let’s really examine the state of Australian rugby, develop plans and then implement those plans. 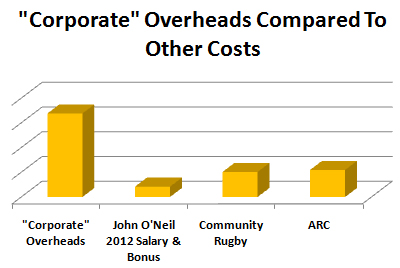 When I first read the ARU annual report I had some concerns – by the time I finished reading it I decided someone needed to detail what the report reveals and the seriousness of the ARU’s financial position. The most alarming thing for me is the growth of “Corporate” overheads since 2010 – an increase of nearly $8.3 million at a time when we’re all being told that there is no money available to invest in the development of Australian rugby! Yes, that overhead figure will include the nearly $2.2 million John O’Neill was paid in 2012 but that doesn’t explain what the balance has been spent on. Let me be very clear about this – the $8.3 million increase is the figure in 2012 alone, not the combined increase since 2010!

There’s a lot in this report so I’ve separated it over 4 pages. Hopefully you can find the time to get through all of the information but if you are time poor, here are the major points:

The 2013 Lions tour should dig the ARU out of a massive hole but we must never let our national body get into such a disastrous position again.

On Monday I’ll publish part two of the analysis benchmarking the ARU’s performance against that of the NZRU which also released their 2012 annual report this week.

Like it or not, rugby at the national level is a business. Whilst the business is built on a sport, an organisation as big as the ARU needs to focus heavily on its finances so that funds are available to develop the sport further and the sport has to be developed to help improve the finances. Revenue must be increased and expenditure controlled. There is only a limited pool of money available so that money has to be spent efficiently.

Before I get into the detailed breakdown of the financial results I want to make a couple of important points regarding the reported loss of $8.3 million in 2012, which is not incorrect but is only part of the story. Firstly on top of the loss reported for 2012, the loss in 2011 has been “restated” because income for 2011 turned out to actually be $3.067 million less than previously reported. That brings the combined loss reported over the last two years to $18.857 million! But wait that’s more – on top of the reported losses there are other losses that when included form what the ARU call “Total Comprehensive Income” and show that the ARU has actually lost $26.057 million in the last two years – perhaps the financials should be amended to call that the “Total Comprehensive Loss”. 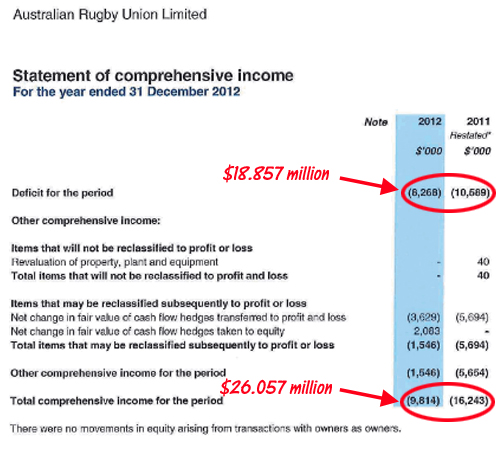