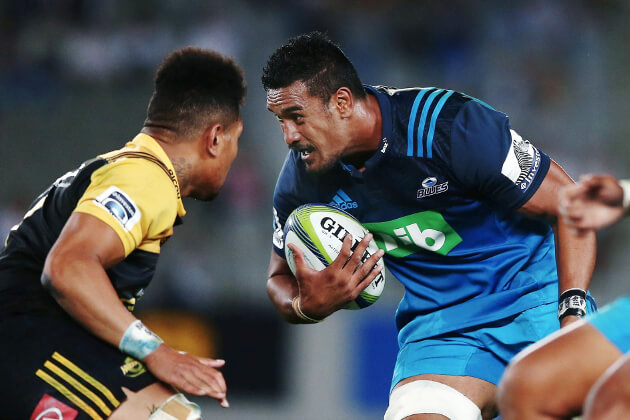 In some way the Blues had a disappointing year in 2016 finishing last in the NZ Conference and eleventh overall.

However 2016 was Tana Umaga’s first year as Head Coach and saw the Blues record the most wins (eight) and fewest losses (six) since 2011.

It is hard not to get excited about Blues roster for 2017.

The backline boasts the additions of Sonny Bill Williams and talented youngsters Matt Vaenga (North Harbour) and TJ Faiane (NZ U20s) to a midfield which already includes All Blacks George Moala, Rieko Ioane and Rene Ranger. Further out , Tevita Li has gone, while closer to the scrum All Black Augustine Pulu comes in to add experience to the backline. Exciting 19-year old Stephen Perofeta (Taranaki) comes in to challenge incumbents Piers Francis and Ihaia West for the number 10 jersey.

Stephen Perofeta (first-five) – New Zealand is a first-five factory and Umanga considers him one full of promise in the position. Look for him to get game time and take the gap when he sees it.

Hame Faiva (hooker) is likely to see a lot work due to player rotation. His form for Waikato in the Mitre 10 Cup was consistent, entertaining and exciting.

Akira Ioane (no.8) was knocking on the door of All Black selection last year. Look for his form to put him in the frame for test selection for the Lions Tests in July.

Jimmy Tupou (flanker). A bolter into the Blues squad after an impressive 2016 Mitre 10 Cup season in a strong Counties-Manukau pack.

Steven Luatua (flanker). With All Blacks’ selection weight off his shoulders we could see the best season yet out of him: he produced some of his best rugby in the Blues jersey in 2016.

Hooker James Parsons is still touch and go after recovery from concussion while Sonny-Bill Williams is not expected to be ready until May after a ruptured achilles at the Rio Olympics. In this Lions year, Steve Tew and NZR have already clearly spelled out that the playing time of key All Blacks, such as prop Charlie Faumuina and Jerome Kaino, must be managed especially early in the season.

Strengths
Coaching -The coaching team of Umaga, Steve Jackson and Alistair Rogers should not be underestimated. Rogers, who started last year with Umaga, was an All Blacks Performance Analyst for eight years, Steve Jackson coached North Harbour to their best Mitre 10 Cup season in years in 2016 and Umaga, as coach of Counties Manukau for three seasons, brought about a dramatic turnaround in success for the union, winning the Ranfurly Shield and promotion in the Premiership.

Midfield – Don’t expect to see much of an injured SBW this season. The real stars of the midfield are likely to be George Moala, Rieko Ioane and a trimmed up Rene Ranger.

Weaknesses
Number 10 – The position has been a perennial issue at the Blues since Carlos Spencer’s time and is still not settled. Lack of a strong pivot could undo the Blues in tight games.

Lineouts – Umaga hasn’t procured any experienced locks so potentially will have to call on young players to secure and win crucial lineout and restart ball.

The Blues have a difficult first four weeks with three of their first four games away as follows: Melbourne Rebels (away), Chiefs (away), Highlanders (home), and Crusaders (away).

However if they can pick up at least two wins from there, the next five weeks promises an easier run including three home games and a bye with matches against the Bulls (home), Force (home), Highlanders (away) and Hurricanes (away) followed by a bye. If the Blues can come out with at least five wins from those first eight games they will be well on their way to beating last year’s total of eight wins and challenging for a playoff spot.

The Blues lost their first preseason match at home against the Hurricanes 38-33, then beat the Chiefs 26-14 two weeks later at the same venue. Umaga was happy about his team’s powerful set piece and defence, and interestingly elected to play two pivots in both matches, with Piers Francis and Ihia West both taking the field at 10 and 12/15 to assume a dual playmaker/controlling role.

Umaga has assembled a strong coaching and playing squad and even a slight improvement on last season’s 8-6 record will put the Blues into playoff contention.