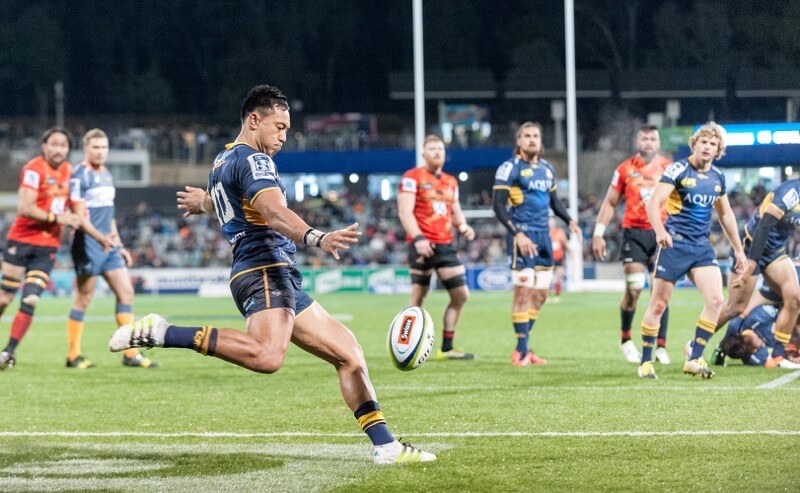 The Brumbies have taken back top place of the Aussie conference with a 42-19 win over the Sunwolves in Tokyo.

The final score didn’t reflect the closeness of the game and they didn’t have it all their own way with a spirited performance from the hosts in their last home game in 2019 making the Brumbies work hard for the win to claim an important bonus point. Connal McInerney bagged a second half hat-trick from the bench in the six tries to three victory with Pete Samu, Irae Simone and Tom Banks the others to get on the try scorers sheet.

It wasn’t the best start for the Brumbies as the Sunwolves got on the board within the opening minute with a high ball from Samesi Masirewa not collected by the Brumbies and winger Hosea Saumaki stepped his way around Christian Lealiifano and beat Tom Banks to the line.

The Brumbies first foray into the Sunwolves territory was on the back of a penalty and attempted their main weapon but the opposition was more than up to it and even forced a turnover.

But the visitors wouldn’t have to wait too much longer with Pete Samu getting them on the board with a try out wide after being sent on his way by Irae Simone who found space in the defensive line and level the score at 7-7 after ten minutes.

The Brumbies were given another chance to attack off a penalty, something that was giving the Sunwolves come concern, but again the Sunwolves stopped the Brumbies maul although referee Federico Anselmi should have punished some questionable ruck work on their own line.

The Sunwolves pressure on Joe Powell at the back of the ruck was working in their favour and was making the Brumbies really work to retain their own ball at the breakdown. On the 20 minute mark they did manage to crack the line with Simone getting on the sheet and continue his recent run of form as his fend was too good for the Sunwolves defence and he went over for his second try in as many weeks.

The Brumbies scrum was proving too much for the Sunwolves, who had an almost whole new front row from last week, and earned a number of penalties in the opening half. From one advantage Lealiifano chipped it over the rushing defence to Henry Speight on the wing and he found Tevita Kuridrani who in turn found Banks to finish off a well worked try.

The Sunwolves were next on the board with a special try from Masirewa where it looked like nothing was on when they had a penalty advantage but he hit the gas to leave three Brumbies defenders in his wake to score in the right corner but a bit too far out for Hayden Parker to convert to make at 21-12 at the break.

The Brumbies rung a few changes in the second half with Henry Speight going with an injury and replaced by Tom Wright and Folau Fainga’a replaced by Connal McInereny and it was McInerney who took the role of Fainga’a on the back of the rolling maul to score the fourth try for the Brumbies.

But the Sunwolves hit back right away and it was Masirewa again who cut the Brumbies defence to shreds and he found Jamie Booth to keep his side in touch and make the Brumbies a little nervous at 28-19.

The Brumbies needed to be more patient with the ball and when they were they tired the Sunwolves defence with 12 phases and another penalty that resulted in another try to McInerney to show Fainga’a he could also do the business from five metres out, with the backs getting involved again.

As the game wound down, the Brumbies rung the changes with the temperature well above when they left Canberra. McInerney must have been frustrated watching Fainga’a roll over 10 tries so far this season and then showed he too could bag a hat-trick to put the Brumbies in bonus point territory. Lealiifano’s 100% kicking continued with his sixth conversion of the day to make it 42-19 and they closed it out for the win.

The Brumbies head home to prepare for an important game against the Waratahs in Sydney next Saturday and a chance to sew up the Aussie conference.

The Sunwolves were never too far behind but the Brumbies kicked away around the 60 minute mark and took control of the match and close it out.

Christian Lealiifano – His composure around the game and popping up in key defensive positions was crucial to the win as was his six conversions.

Pete Samu scored one try and the breakdown was a busy game with a lot going on. Tevita Kuridrani had a quiet game compared to last week but had good involvements, including the try for Tom Banks. James Slipper, Rory Arnold and Allan Alaalatoa were part of a dominant scrum that won a number of penalties.