cyclopath said:
We could declare Onehuga annexed to the Pitcairns under Byron Kelleher's stewardship. Problem solved.
PS - not sure if that will bother anyone in either place, though?
Click to expand...


It would seem that Pitcairn is on an immigration drive. New residents are most welcome.

Update on the boy:

For something different, I took the boy hiking up Kosciuszko on Good Friday to get him a bit of fresh air, and hold up his physical and mental limits in a mirror for him to look at. Read about it here:

While the bike sessions have been intermittent, the boy decided to have a crack without me holding onto the seat. Benefits are I don't have to sprain my wrist trying to hold him upright (he's 55kg).

When you consider his historical threshold for pain and humiliation is quite low, and the 9yo twins across the street can ride their BMX on a dirt track like little dervishes, it is a big step. They're watching him, and he's struggling, but he keeps ploughing on.

We have a gentle slope on our street that allowed him to start at least coasting on the bike, and get his right foot through half a cycle on takeoff. He got a bit frustrated with getting his left foot on the pedal while maintaining balance at the same time. But so close!

Yesterday, I was working from home, and suggested he have a go after I picked them up from after school care. I was in front of the PC and he came in and said I should come see his progress.

He GOT IT. HE FINALLY FUCKING GOT IT!

After a good push off, he got his left foot up and on the pedal, and got a good 20 metres in before he ran out of street. Once he did that, I got his mother out to have a look as well, and she's pretty chuffed.

Shouldn't surprise me really. His whole life, he's only really done something when HE wanted to. All the pushing in the world won't work.

Now he needs to get hold of riding uphill, and turning the bloody thing.

Update on the girl: FFS!

Pfitzy said:
He GOT IT. HE FINALLY FUCKING GOT IT!
Click to expand...

you'll never get him off the fuckin thing now. although i suppose times have changed for kids these days, its all that smartarsphone shit from what I hear. i was one of those 9 yr old gromits on my bmx, nuthin else to fuckin do back then. well remember face plants after canning off berms, table tops, etc. Shit god only knows what those Red Line and Kuwahara bikes (NZ$600 in 1980) that i never fuckin had are going for now

Kosciusko, had that lp for 30+ years still not sick of that song

Dismal Pillock said:
you'll never get him off the fuckin thing now. although i suppose times have changed for kids these days, its all that smartarsphone shit from what I hear.
Click to expand...

Yeah exercise is hard. But hopefully once I get him more confident, we'll be able to get a bit of time in on the local bike paths, and get him the fuck away from the screens for a bit of time. Then as he hits his teens, longer rides.

Maybe back to Kosi for a day trip on the bikes. Gravel track will test him.

I never owned a BMX, only a standard bike. Nothing but gravel on the farm to ride on, and ate gravel at various points - one day had the worst stack and was picking it out of my teeth! Making your own jumps n shit. All fun until I got a motorbike.

And now he's managed to progress to gentle turns around the end of the cul-de-sac. Nearly hit someone's car, but if there's one thing he's good at, its stopping.

Put his seat up a couple of inches while I was at it so now he's not as cramped. This is going well.

Staff member
Slip the ace of spades into the spokes, and he'll be goin' all Motorhead round Pfitzy Place.

Pfitzy said:
And now he's managed to progress to gentle turns around the end of the cul-de-sac. Nearly hit someone's car, but if there's one thing he's good at, its stopping.

Put his seat up a couple of inches while I was at it so now he's not as cramped. This is going well.
Click to expand...


It sounds like it is going really well, good work. Now get any friends of his involved and pick a destination a few kms away and head for there - just ride with them and then leave them to it to do whatever when you get there for a while so it's about the fun not about the cycling per se. After a while it becomes a whole lot easier going the longer distances with them. How's your daughter going with it?

Funny you should say that - on Saturday I took him out for about 6-7km ride around the suburb. He did pretty well, not too much pace, couple of collisions with bollards, and he kept right on going.

Next step is gear work. 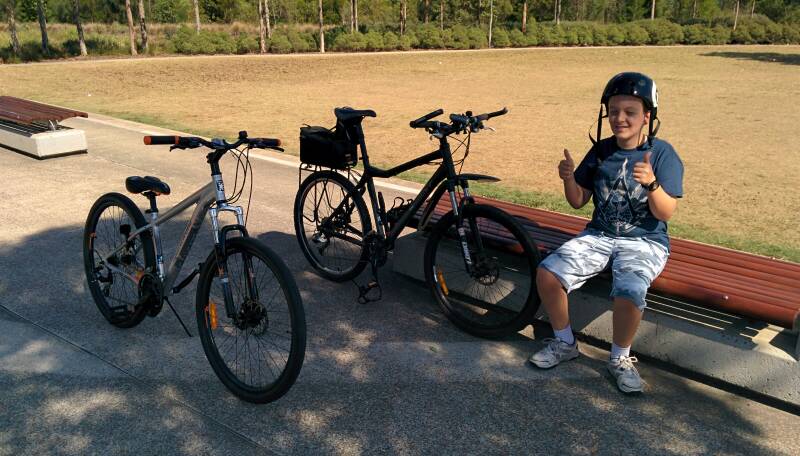 Daughter still struggling. Not going to push her - seeing her brother ride is enough motivation. She just needs to get over the fear.

Pfitzy said:
Daughter still struggling. Not going to push her - seeing her brother ride is enough motivation. She just needs to get over the fear.
Click to expand...


Yes some take a while to get over that, and then when it clicks it is great. Try getting her doing short easy rides with a time limit that you stick to (i.e. let's go for a quick 15 minute ride at the park) and that will build her confidence. Once she has the confidence you are sorted and it is well worth it in the end. Lots of fun.

She's not even riding yet - still holding the seat while she's on it.

Took the boy out this week after work. He had a stack, lost some skin, got back on after a bit of posting and moaning. No tears - glad actually that he is older, because when he was younger he would have quit at the first accident. Pussy.

Best tip I was given for teaching the kidlets to ride was to hold them under their armpits not the seat or bars.

Theory is that they sort out any balance issues themselves pretty quickly whilst you still supporting them (heaps easier on your back too).

Also if they start to wobble tell them to pedal not brake!

Been a while, but I'm back and tootling around the neighbourhood on the bike again with a goal in mind: bikepacking/touring. Hardly going to get the practice I need in lockdown but it's a start.

Having seen some of the rail tails in New Zealand (without riding them) and knowing that rail trails here exist, but are shit, there are a few other routes around. I'm looking at this:

Would probably start at Gulgong (Section 2) and map out a 6 day ride skipping Dubbo (Section 6) and modify a few bits around Section 7 & 8 .

Nothing extensive as I'm a middle-aged bald fat fuck riding a MTB but one of the advantages is I already have the rack in place, so am now thinking about panniers.

Does anyone have/use panniers? I've already got a Topeak rack that was for commuting back in the day, and it'll take a couple of decent bags. These look alright: Pfitzy said:
Does anyone have/use panniers? I've already got a Topeak rack that was for commuting back in the day, and it'll take a couple of decent bags. These look alright: