This weekend I will update the records and publish again. Plus I will make sure the AAGPS get a copy, even though they provided bugger all support in my work. So many thanks to the good staff at Scots, Kings, Shore (loved the coffee) and Sydney Grammar who assisted with some blanks. I am still working on the last one, 1910 Second XV.

My mail is joeys pretty much full strength... so don’t believe rumours on Gibbs

And Hugh bokenham returning after 1 week off

Scots similar with all but a winger missing

Joeys definitely favourites... and if scots don’t start well, I think joeys could put on a clinic

Shame Coorey isn’t officiating... but given he is a joeys boy, probably for the best

As in the unlikely event of scots surprising, the post match lynching would not be pretty
W

Walter said:
Think you may have to look at your 2nd XV data SIC have 9 titles not 6
Click to expand...


I have rechecked and we may both be wrong.
My records have View winning the 2nd XV comp 8 times.

I never heard anything back from View when I requested (numerous times) corroboration of my numbers.
When is your 9th?

Can someone explain to me why Shore has so many titles in 2nds?!

But later coached Waratahs... unless I am mistaken

Again, some trivia.
Here are the results from the unofficial competition years.
These premierships were never awarded but gamess were still played as per usual among the schools.
These are not included in the title numbers. Nice to see HIGH do well in 1943
If they were included...Joeys would have won 16 2nd XV titles in a row (1931 to 1946)

ItsNotPink said:
Nobody would bet against you Wristman.
No lead is safe from the Scots 1st XV.
Just ask Riverview, Kings, Newington.
Should be a great day and looking forward to every minute.
Click to expand...

People seem to forget Joeys cam from behind to beat Newington and Riverview...should be a cracker!

I am aware that the GPS comp is unbelievably strong competition but I am shocked that Shore have not won it more often!

They always used to have really strong sporting depth!

FootyGuy said:
People seem to forget Joeys cam from behind to beat Newington and Riverview.should be a cracker!
Click to expand...


Agree FootyGuy - I was there at both games and great comebacks from Joeys.
My observation was more about protecting the lead if you get in front of Scots.
They will keep coming until the final bell!

Looking back at the trial match earlier in the year, it was very close with Joey's having the accendency until I think it was Mossman who got a yellow card. Joeys to their credit took full advantage unlike New did last weekend. If Scots can contain Joey's backs then it will be an absolute thriller.

Also in terms of crowds, whilst 1994 Scots vs Joey's had a massive crowd, for me 1993 Scots Joey's was the biggest schoolboy crowd I've seen to date.

Yes these were both massive crowds. But even the Joeys v Riverview crowd two weeks ago was ridiculous. People five or six deep on the road. Fences collapsing under the weight of spectators. Not a blade of grass free for viewing. Expect the same this week.

Balmain Subbies said:
Also in terms of crowds, whilst 1994 Scots vs Joey's had a massive crowd, for me 1993 Scots Joey's was the biggest schoolboy crowd I've seen to date.
Click to expand...


I was clinging to the old hill that game. Massive crowd and probably the longest tunnel I ever saw from a school. Enormous build up. If Joeys won it would have been a three-way premiership with High. Joeys v Riverview last year was huge as well.

The record at Joeys was the 1956 game v Kings. 20,000 people were in attendance for the premiership decider.

Joker said:
An oldie but a goodie. Many thanks to my mate who made this.


Sadly, that particular red-head passed away last year, I believe.

SonnyDillWilliams said:
Can someone explain to me why Shore has so many titles in 2nds?!

But later coached Waratahs. unless I am mistaken
Click to expand...

Hawkins was a 4th coach of I remember correctly.

Jika and Nev Emery did start coaching the 1st and 2nds around 1980 for a short period.

Don’t worry about the crowds Joker the injured underdogs from BH will cross the bridge or is it bridges ?

Riverview v Newington @ Lane Cove
Both teams will have seen this as a season that coulda, shoulda, woulda happened, but never did. Newington are, as usual, their own worst enemy. The big issue has been fitness and this has shown in their late capitulation against Scots and earlier to Joeys. Newington had both of them roasting on the spit, next to the pig, and then let them off. Against the Hobbits of Hunters Hill, the team lost discipline as well, then the petrol when it was needed most. The Joeys boys exposed the 50-minute game that Newington have. Riverview again could have done better this season. They started so brightly with a win against Kings and then reality crashed for them. It was a heartbreaking loss to Scots (I still think they were robbed) and then a loss to the Catholic cousins dented season hopes. While they did get some of the mojo back but “kicking the kitten” (Shore) I am not really convinced they will beat Newington. If the “real” Newington turn up and play for 70 minutes it will be a long afternoon for View. Tough one to call. It will come down to “who wants to impress the girls more” I feel, so hence with the support of the Ladies of Loreto and the Monte Maidens, then View will get home by at least 6. If the girls are too busy to attend as they are scoping out finer “livestock” at Hunters Hill, then the Newington Warriors will run rampant. 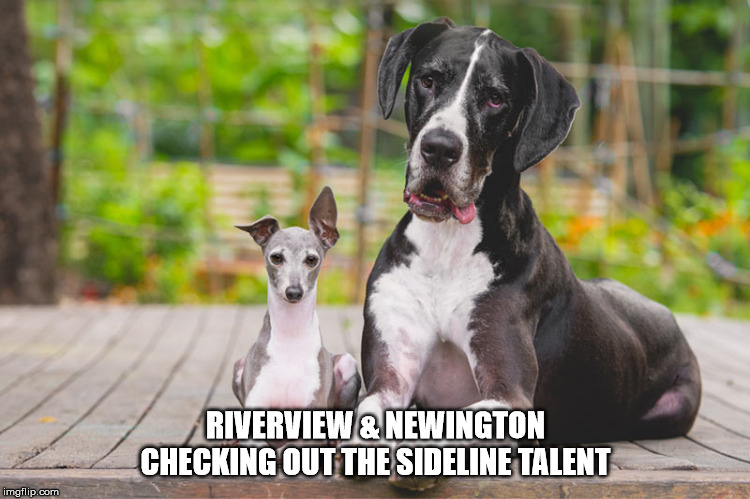 Shore vs Kings @ Northbridge
Who would have thought that this weekend will see Kings playing for the wooden spoon? After all the bluff, bluster and chest pumping at seasons dawn, the Kings supporters have nothing but woe. The shield has been dented and the sword broken. I feel they are just bloody unlucky and really should have beaten a couple of teams. The terrible defensive read in the final minute v Kings will haunt them. They gave everything they could last weekend to beat Joeys. At the conclusion both teams were flat out on their backs, totally shattered. Kings had thrown everything at the Joeys lads and came up zero. Pride is what they are the playing for this weekend. To the educated Shore men though, they see a chance to maybe, just maybe steal a win from the Parramatta purists. The Shore boys have been showing up each week with their brave heads held high as they have taken beating after beating but not once ever giving up. There are no braver souls in the Sydney GPS than the Shore lads. I just hope that they will continue to be brave and believe. I so want Shore to win, I think we all do (well maybe not the Scots supporters, they just hate everyone). It would mean the most to the School if they could win something that doesn’t involve an oar. God bless the lads and God speed. I pray for a Shore win by 2.

Joeys v Scots @ Hunters Hill
In 2018, Dark Lord Lambert was humbled upon the battlements of his Bellevue Bastille when the smaller, smarter army from the West breeched their ramparts and threw down his storm troopers. This season has seen a rebirth of the Scots College brand. It is simple, ugly, brutal and effective approach, built around the premise…no team can match us for fitness and strength. Ultimately these ideals have seen them prevail with late game victories when the other armies have tired in the last 10 minutes. While the backline has spluttered and sparked at times, it has been the “blunt force” trauma approach of the Uruk-hai forwards that have seen them swarm better opponents at the death. Meanwhile, in the gentler rolling greens of “Hobbit” Hill, the smaller country folk have continued to do what they have done now for a century, that is “be a little cunning”. The Joeys lads, while not blessed with physical attributes that come from Soviet science labs, have used their brains, more rather than their brawn to get results. The simple, quick passing game they have employed have sliced up oppositions who are focusing for the big hit, rather than looking at the actual ball. The Joeys coaches have emphasized it seems a swift ball movement approach and hitting the line at alternate angles. In short, Joeys have devised a game plan which is hard to read but a joy to watch. This plan though has been assisted by a once trusted Mordor insider who now calls Joeys home. Being steered around the park by the best 10 in the business, Joeys have extreme pace and firepower out wide. They also have stubborn, swarming defense which has contained the “Superman” of Kings and the “Tongan Terror” of Newington. At home, in among the leafy green of the park, playing on the soft Santa Anna turf, with 1000 throats all bellowing support, the Joeys lads will be feeling quite confident. Fitness will be key in this game. Joeys though know how to play 70 minutes flat out and last week against the larger, stronger Kings men they showed their staying power. Can they back it up? Can the Joeys boys save “Middle Earth” for the Dark Lord? No score predication from me this week. I just wish all players the best and I hope all fans enjoyment in this day. See you at Jacks after. 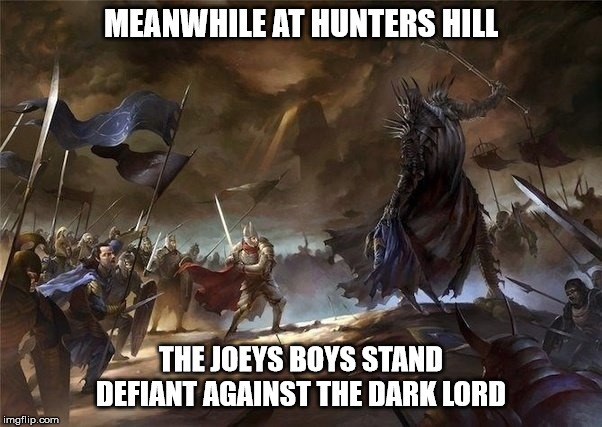 Don’t worry about the crowds Joker the injured underdogs from BH will cross the bridge or is it bridges ?
Click to expand...


You guys get lost as soon as you leave the cross city tunnel! 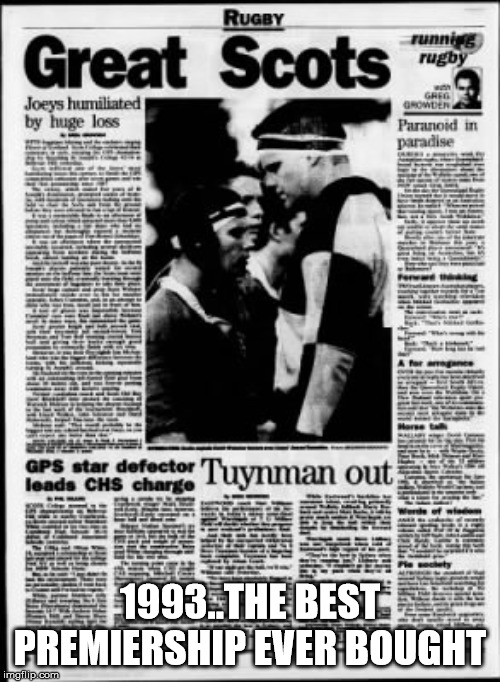