I thought they Rebels CEO was also the VRU CEO. In fewer words Rob Clarke was CEO of the combined operation.

Scooter said:
A report in today's Herald Sun says CEO Rob Clarke is set to leave Rebels to take up a job with ARU. The VRU CEO is tipped to take over Rebels role.
Click to expand...

Scooter I can't seem to find a link on this potential move anywhere ion the Hun website, can you direct us to it? From all I can Rob Clarke is sticking around until the end of 2015.

is Peter Leahy the VRU CEO ?

In the email Bill sent round to us at the ARU: "Rob joins us with extensive experience in business and sports administration, including leading major advertising companies, working at two Super Rugby clubs (Brumbies and Rebels) and he was formerly the ARU’s Chief Operating Officer from 2006-2007.

In addition to his business and Rugby administration experience, some things you may not know about Rob is that he represented Australia in Schoolboys Rugby in 1981, has completed two Sydney to Hobart Yacht races and has trekked to the South Pole to raise money for charity."

There's a bit of a minor re-structure going to happen too. Nothing major just a few role switching around etc. Fagan got through a crapload of work and the new role has had marketing brought in under it as well, which means Rob has got his work cut out for him!

Staff member
The impression I get is that it's more of an internal transfer to cover the loss of Fagan.

An update for Rebels fans on their new attack coach, Todd Louden.

This season he was Head Coach of Wanderers in the Newcastle/Hunter competition.

All seven grades, including women, were Minor Premiers. Six of them won Grand Finals. Two teams went through the season undefeated; one of which scored maximum bonus points.

The seven teams lost either four of five games between them throughout the whole season.

You've bought the best. Now get behind him and your team.
.

Staff member
So, anyone care to speculate on what this significant announcement may be?

All rebels players, present and future will live and breed within Victoria, improving the genetic stock of the local rugby talent?

Yep, my first thought too. We have a new CEO with 30 years of banking experience. Join the dots I say.
D

Train Without a Station said:
Just a bit of insight. I've been reliably informed that McGahan is quite popular with the playing group .
Click to expand...


I can back you up on this, TWAS. The word I am hearing is that Tony is firm and demanding without being overtly dictatorial. I'm told he listens and advises when required, and sets very clear instructions when needed.

He is also good at giving a decent bake when players step off the yellow brick road.

The assistants are free to look after their portfolio as long as they follow the curriculum.

Sounds like any good headmaster, which is basically what a head coach is.

Staff member
Looks like we would ahve lost Lalakai Foketi anyway, even if we chased him. Payto and Panda:

-----
Rising Australian centre Lalakai Foketi has been lost to French rugby.
The under-20s star last year signed a contract with Bayonne but then attempted to get out of the deal, and the Waratahs were ready to snap Foketi up.
But a release from his NRC club, the Greater Sydney Rams, revealed yesterday Foketi has departed Australia to take up the Bayonne deal.

Staff member
I shamelessly stole this from twitter, but thought it was pretty good. 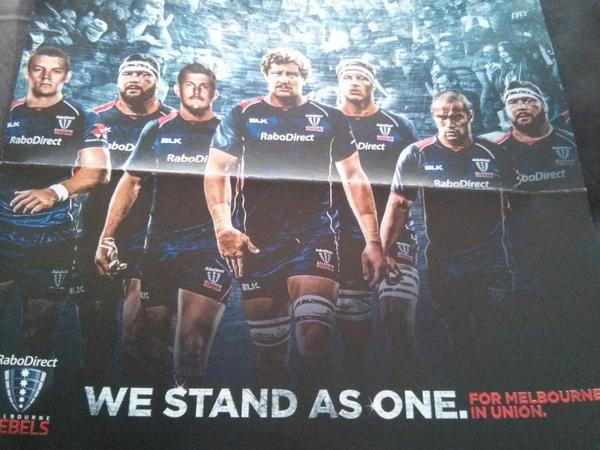 Spot the problem with this picture...
T

Mate he's the people's champ. Should be 3 of him there!

Should I be concerned that Adam asked Mitch to think of me as Tom Brady from the Patriots to get his enthusiasm ramped up?

Great to see all the boys during the team lunch, although I shudder to think what the piggie's combined daily food bill looks like!

Staff member
So anyone going to the lunch tomorrow? Keen to hear what this 'special announcement' is. Still have my coin on a private equity.