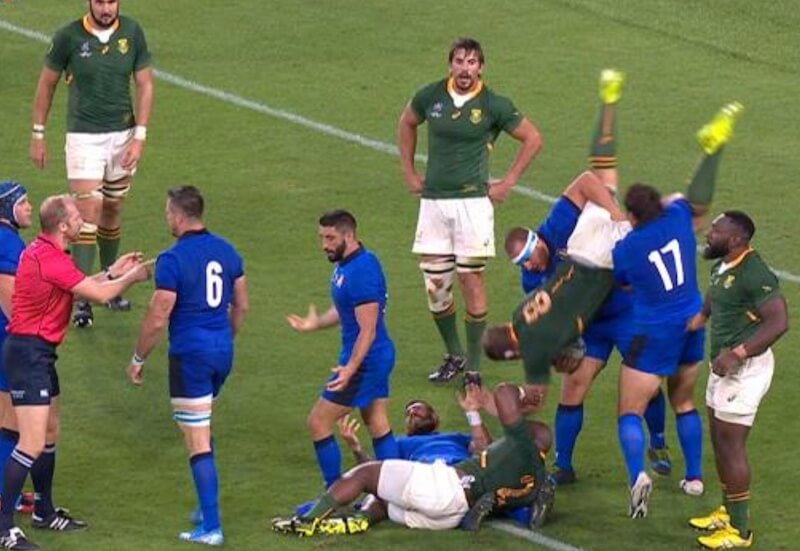 A fourteen man Italy went down to South Africa 49 – 3.

A red card to Lovotti ends any chance of an Italian victory, despite the close scores at the break.

South Africa led the first half 17-3 after tries by Kolbe and Mbonambi. The Italians believed they were still in the match, and returned from the break in good spirits.

Steyn’s beautiful linebreak put the Springboks close to the try line, but a silly attempt to stop Tebaldi five meters from the Italian line gifted a penalty to Italy.  This is where everything went wrong for Italy.

I don’t think anyone knows what was going through their minds, but the two Italian props lifted and tilting Vermeulen over, pushing his head-first to the turf.  Wayne Barnes had other option than to show one of them the red card. It may have been worse, at least Vermeulen wasn’t injured.  Luckily for Quaglio, he wasn’t shown a red.

The episode made a difficult game impossible. Already two Italians sustained injuries in the first 15 minutes, with props Ferrari and his substitute Riccioni exited the game, forcing the referee to order uncontested scrums.
South Africa was displaying their usual rash defence giving Italy very few opportunities and was capable to break the Azzurri’s line easy.

But 15 a-side, Italy was still clinching to a faint hope. After the red card, with most of the bench already used, the game was virtually over.

32 unanswered South Africa’s point followed after the 42nd minute, almost one each remaining minute played. And it was ugly for Parisse’s farewell from the international scene and for the hopes of the wild boars faithful.

Am scoring in the second half

The Springbok ended the game with Kolbe’s second major, and tries to Am, Mapimpi, Snyman and Marx, the right punishment for the wild boars madness.

Drowning in Pool D: how the Wallabies lost to 16 men
Drinking Rum with the wrong mixer – an analytical view on Australia’s attack play at the World Cup