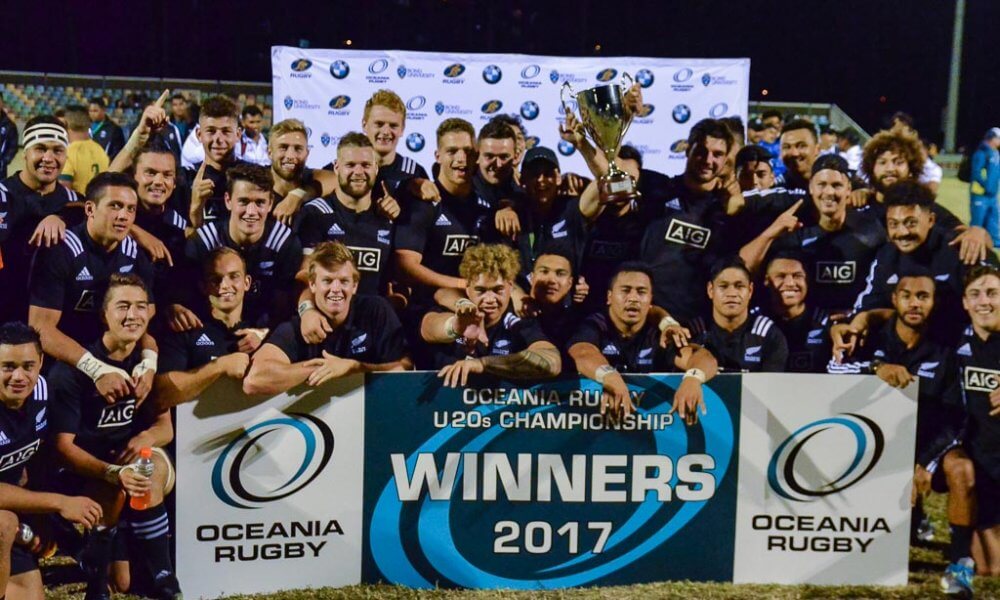 On a Black night for Aussie Super Rugby teams, sandwiched in between losses to Rebels, Reds, Waratahs, and Western Force, the Junior All Blacks  handed out a rugby lesson to the Australian U20s side in the final of the Oceania U20s Championship. The New Zealand U20s defeated the Australian U20s side 43-6 in the final match of the 4 team tournament at Bond University on the Gold Coast. 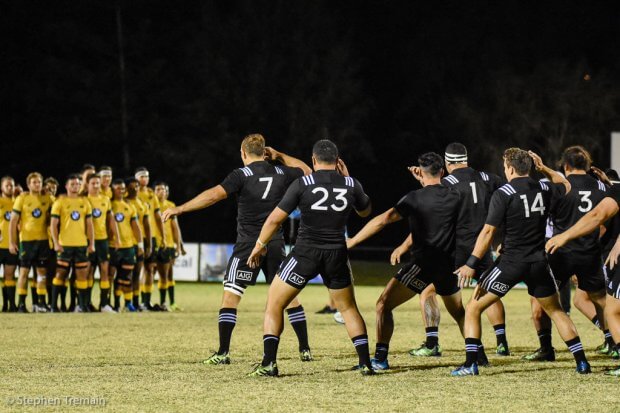 Australia fielded a similar side to their Round 1 team who recorded a comfortable win against Samoa, The main changes being Rebels-capped Jordy Uelese starting at hooker, and Harry Nucifora at half replacing the injured Ryan Lonergan, and Isaac Lucas replacing Jack McGregor on the bench. New Zealand fielded an experienced side, boosted by crowd favourite front-rower Alex Fidow returning from injury via the bench.

Despite the lop-sided 6 try to nil scoreline, the Australian team started strongly with consecutive penalties and then a strong run by Dylan Riley allowing Harry Nucifora to slot a penalty goal for a 3-0 lead. This was the first time in the tournament the New Zealand side had been behind on the scoreboard, but unfortunately it wasn’t to last long. From the restart, the Australians were unable to successfully exit their own 22, and New Zealand Captain Luke Jacobson was able to crash over from the back of a 5-metre scrum. Tiaan Falcon added the extras, and the Kiwis were in-front 7-3. 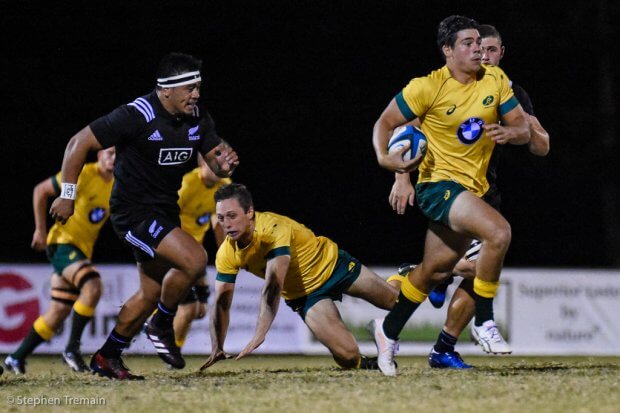 Dylan Riley made an early break leading to a penalty goal

In what was to be the story of the night, the young Aussies were unable to capitalise on their attacking opportunities, with lots of dropped ball in the backline. The New Zealanders had no such trouble, and lock Walker-Leawere scored after a break down the right wing.  Nucifora added a second penalty to make it 17-6 at the 25 minute mark, but unfortunately the Australians were not able to trouble the scorers again after that.

New Zealand dominated the remainder of the second half, with quick fire tries to Will Jordan (15) and Tamati Tua (13) blowing out the score.  The Aussies’ attacking chances were cruelled by a forward-pass and then another dropped ball, resulting in an 80-metre break downfield by New Zealand.  A professional foul by Harry Nucifora, prevented a try, but earnt him 10 minutes in the bin. The Australian line-out spoiled the NZ ball, and the half-time score remained 29-6. 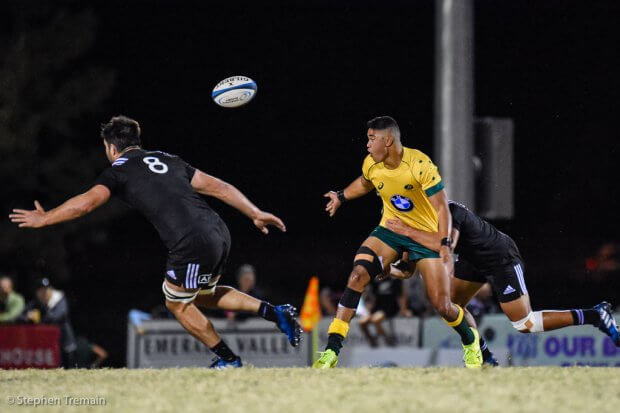 New Zealand started the second half with a attacking move down the right wing, only stopped by a good tackle from James Ramm. From the line-out, New Zealand were held up over the line. With Nucifora still in the bin, Theo Strang came on for Tony Hunt. NZ looked to be about to score again, after a cross-field kick-pass from fly-half Tiaan Falcon, only for the last pass to be intercepted by James Ramm. The Aussies cleared their own half, but another knock-on had them under pressure again. New Zealand seemed to have bombed their next try-scoring opportunity with a knock-on, but after consulting with the Assistant Referee, the Referee reversed his decision, and awarded the try, puzzling both the crowd and the commentators. 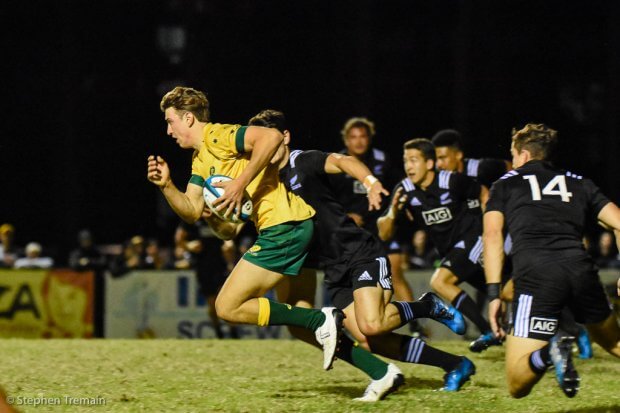 Replacement Thomas Umaga-Jensen was the next to make a break, but the last pass went into touch. The respite from the onslaught was short-lived however, with a rampaging Jacobson crossing for his second try a few minutes later, after a 40-metre run. This was to be the final scoring play of the match. The Australians put in an improved effort in the last 20 minutes, but were unable to cross the line, too often execution letting them down.

On the positive side, the game was played in front of the largest crowd (approx 2000) I have seen at the Bond University ground, and the interest in the Oceania U20s championship is building nicely, after it’s 3rd year on the Gold Coast. 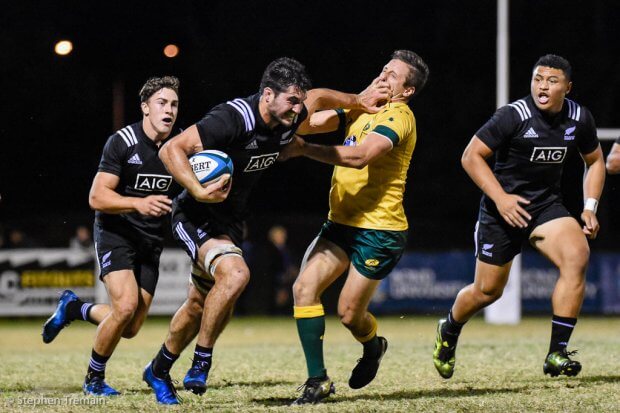 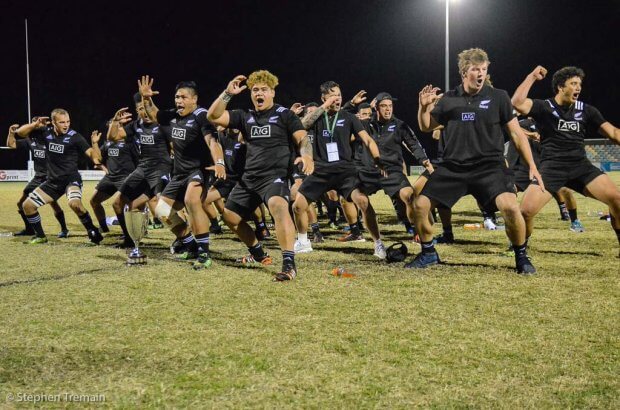 The earlier game was played in front of a appreciative crowd, and the two Pacific Island teams rose to the occasion putting on a high-scoring exciting game.  Fiji got off to a flying start, with tries to Matawlu, Turagavola & Batiniu giving them a 22 – 10 half-time lead. 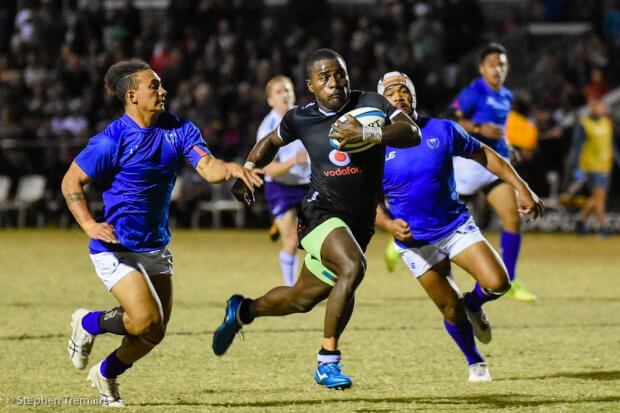 Fiji started strongly, but Samoa took charge in the second half

A second half try to Jamie Kotz gave the Fijians a 19 point lead, but then the Samoans staged a remarkable fight-back and scored 29 unanswered points to run out winners.  Of interest to GAGR readers were good performances by Canberra based Jamie Kotz (Fiji #15) and 2016 Australian Schoolboy, Hunter Paisami (Samoa #22) 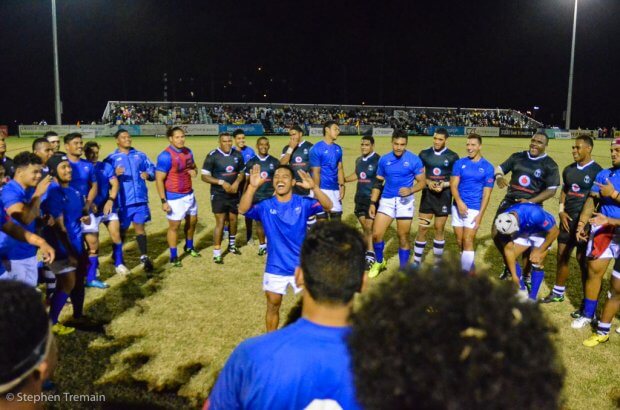 Fiji and Samoa players share a moment after their game

Rugby Report Card 24 – Mid-Season Blues
UN-AUSTRALIAN ACTIVITIES: A round up of the other Super Rugby matches