The National Under 20 Competition is the second new tournament for 2014 and it will be a vital one for the future of Aussie rugby.

The ARU has reacted to its poor results in the IRB Junior World Cup [JWC] in the last two years and will be holding a tournament to be contested by four Under 20 teams: Queensland, NSW, a combined “Southern States” team, and an invited country, Tonga.

The young Aussies were hampered last year by an imperfect selection process which involved a few camps for training and assessment, and one walkover game. This was discussed in a Green and Gold Rugby review of the Australian performance in the 2013 JWC. 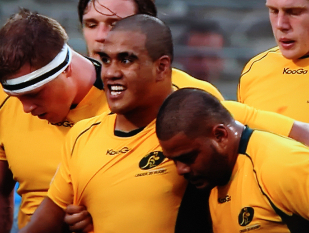 This year the selectors will be able to choose players under tough match conditions in the National Under 20 Competition [NUC], to be held in Canberra from March 22 to March 26.

This is a short period for teams to play three games in, but the selectors will be looking at the players’ ability to back up with not much of a rest, because those are the tournament conditions they will get in the JWC in New Zealand in June.

Having this national competition to train players longer and select them better, will not guarantee better results in the Junior World Cup, because you’ve got to have the players to do so, but it will make it more likely.

I know a bit more about this (boringly named) team because Michael Cheika was kind enough to spend some time with me.

He said that ex-Waratah and Wallaby Tim Kelaher started the squad selection process after he was appointed as Waratahs’ Chief Scout in June 2013. Since it was the first year for a NSW Under 20s team he went through the established channels of NSW Schools rugby and the Australia 20s from last year, and also connected with Club and Colts coaches.

A group of 45 was chosen for the initial NSW Colts’ intake. Then Cheika took the list to all the club coaches and said:

If there’s anyone who you think is worthwhile and is not in this group, send them down to training. 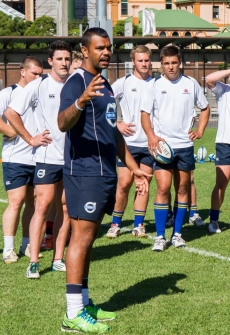 They got another 15, and with other add-ons they now have 65.

The squad will be reduced in early February and they will finalise the squad about a month before the competition starts (on March 21st).

The NSW Colts are getting some high level coaching. It started around 20th November and was handled initially by the three senior Waratahs’ coaches so they could put names and skills to faces. Experienced Waratah players like Kurtley Beale also help out on a rotating basis. The senior coaches still co-ordinate the three sessions a week but after a month of hands-on mentoring they passed on the work to three reasonable replacements.

Those three fellows have all coached at test level—that’s a coaching panel !!

Our boys are absolutely loving it, they are training three times a week in a semi-professional environment.

The official NSW Colts’ coach won’t be appointed until closer to the Championships and will most likely not be any of the above senior coaches. Cheika said that they would look for somebody who could be in that “junior and development niche for a few years so he can be put on the pathway to be a senior coach.”

But he doesn’t want to over-coach the young players:

– Internal trials “mixed and matched with Country Under 20s if it can be arranged”.

– Possible v Probables matches mixed with senior players who are going to be involved in the Pacific Rugby Cup [PRC].

That’s a good programme for a state Under 20’s squad. 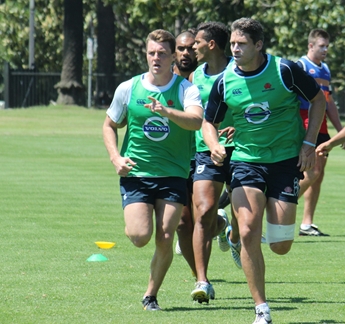 When asked what NSW players should be looked out for in the National Championship, Cheika who has attended all the practice sessions, nominated flyhalf David Horwitz who is in the Waratahs EPS and was the Randwick starting no.10; Jack Dempsey “obviously has been outstanding” on the NSW Barbarians tour and in Under 20s last year; and scrumhalf Fabian Natoli who has started for Manly in First Grade.

He also had kind words for flyhalf or fullback Jonathan Vaux, winger Henry Clunies-Ross and lock Cameron Skelton, brother of Will,who played Colts I rugby in 2013 for Sydney Uni though still at school.

Those were only some off the top of his head, and he added:

There’s plenty of talent; we want to build a really strong team so it gives the National 20s a good opportunity to be successful at the World Cup.