NSW Under 20s doing the business

NSW Under 20s doing the business

The NSW Generation Blue Colts Under 20 side is gearing up for the business of defending its title in the National U20 Championships in Canberra from 20 – 25 March.

On Sunday they play in their first trial match, against NSW Country Colts.

In charge is ex-Waratah and Australian Sevens’ player Tim Rapp, who is also running the Gen Blue senior side. With him is another full-timer, Brad Harrington, in charge of strength and conditioning, and set-piece and defence coach, Matt Bowman. 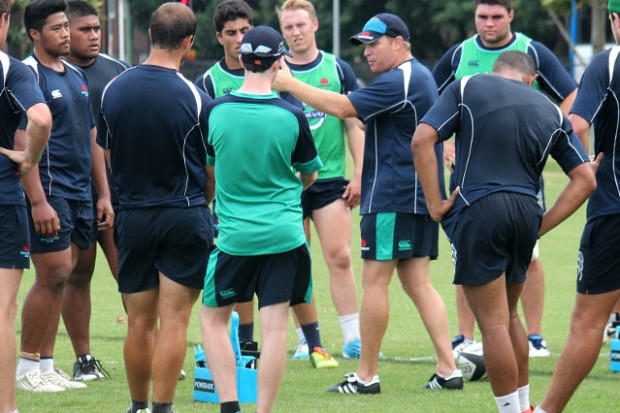 Tim Rapp – the man in charge

But there is a bigger agenda and it’s not all about the Championships,  According to Rapp:

We are creating a succession plan to replace the current group of Waratahs with a new generation and these Under 20’s players are in a good position to be part of that future.

The juniors will have every chance to progress to the professional group if they have the talent and do the work.

The information that the Waratahs are getting day to day is being drip-fed into the Under 20’s—word for word and play by play, as best we can do because they don’t have the same number of training hours.

Indeed, one can go to see the Waratahs train on the field and when the Under 20s come on to have their session, they are doing the same stuff. Often Rapp and his staff are with the senior group working out what to prioritise for the shorter time they have with the youngsters.

The system makes sense, but it wouldn’t work without the personalities of the Waratahs’ senior coaches being what they are. Cheika and his assistants have offered their advice freely, and encouraged some of the top juniors by using them in their hit-out sessions before the Wallabies came back. Four of the Under 20 lads even got to play in the Waratahs first trial at Granville Park last Saturday. 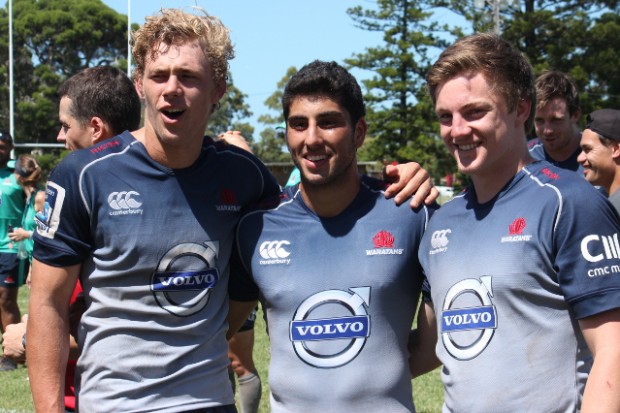 Talent identification to select the original group was a long process. Since the 2014 nationals Rapp and NSW Chief Scout Tim Kelaher got out to club matches every Saturday and viewed videos of others. They were at school rep matches and some games between individual schools.

The rugby preparation for 2015 started as early as July 2014 when they chose a Sydney Under 19 team to play against NSW Country Colts to test them to see if they could play with others who were not their usual team mates.

To widen their base of players they didn’t involve those who had been part of the 2014 NSW Under 20 programme who were still eligble for 2015, but used new fellows whose names were put forward by their Colts’ coaches.

The best of these newbies were then added to the lads from the 2014 programme. There were 58 candidates then, but because October was their off-season NRC players were not included yet; nor were most 2014 schoolboys.

But when everybody became available at the start of November, players were culled and 52 remained to start training in earnest. After some exhausting training in hot conditions, and testing the lads in challenging hit-outs, which were virtual selection trials, the list was reduced to 36 in January.

Vunipola Fifita – rising star – can do it with his eyes closed

Positions are my guesstimates only: especially about locks who can play in the back row. This group will be reduced to 25 players for the nationals. 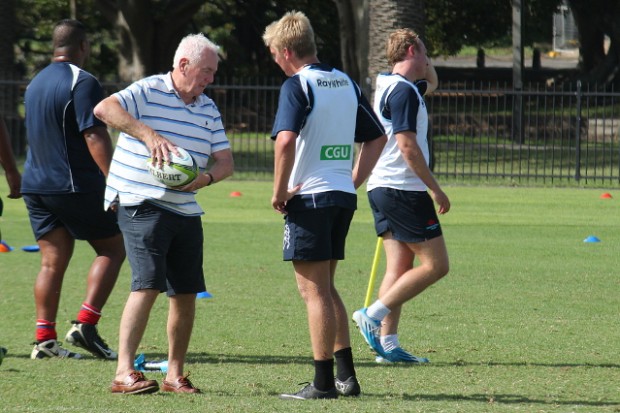 It’s no secret that Rapp rates four of his charges: lock/flanker Ned Hanigan, opensider Jack McCalman plus wingers Christian Yassim and Alex Newsome, because they played for the Waratahs’ senior side in their trial last Saturday.

He also expressed a high regard for loose head prop Cameron Orr who was in the Australian Under 20 side last year, and hooker Folau Fainga’a who was with the NSW Under 20s in 2014.

Francis Brown, a 130kg prop who played for Australia A Schools as a 16 year-old, and who has attracted the interest of the Chiefs in New Zealand, is being groomed by Rapp—as is Lukhan Lealaiauloto-Tui, a lock of almost Will Skelton proportions.

Both are in their Under-19 year, raw, and working on their mobility, but if they prove themselves in the upcoming trials they will represent their state in the nationals.  Otherwise they will get another season of experience and conditioning with their clubs and a second chance to succeed in 2016.

Big boppers Lukhan Lealaiauloto-Tui and Francis Brown – raw, and working on their mobility

Andrew Kellaway is chosen for the NSW Under 20s but he is contracted to the Waratahs’ senior side and will not play in the nationals if he is selected for the matchday 23 for that week.  Says Rapp:

Hopefully he isn’t playing with us and with the Tahs! That may sound funny but our program is about producing Waratahs over the long term not purely about winning the national championships.

He also said their organising and planning had improved with the full-time appointment of Brad Harrington as strength and conditioning coach.

The athletic development of our players is far more advanced than for the players of last year at this point in time. […] It’s running more like a semi-professional program at the moment, but it’s always a work in progress. 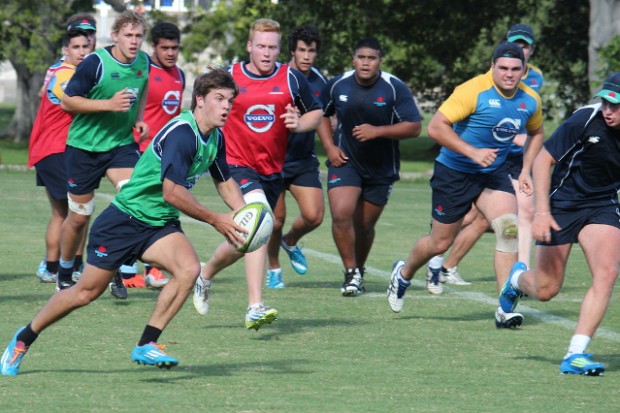 As it was last year there is emphasis on competition in training, and playing rugby in hit-outs and matches.

And the matches start on Sunday

Dates and venues subject to change.
Another trial may be added.