Preview: Aussie matches in Round 10

Preview: Aussie matches in Round 10

At the end of Round 9 Australian teams had played seven games against New Zealand teams to be 6-1, but in their twelve games against South African teams they were only 3.5-8.5.  This adds up to a record of 9.5-9.5 against foreign teams.

There had also been ten Aussie derby games played.

There will be two games against Kiwi teams and one Australian derby this weekend.

The Hurricanes have to get back to form after playing poorly in Round 9 and being overtaken by the Blues in the race to head the NZ Conference.

For their unexpected victory against the Crusaders to mean anything the Western Force have to put 80 minute pressure on another Kiwi team and see what that brings.

Last week the Hurricanes could not get going against a feisty Blues’ team and were often maltreated by blindside flanker Steven Luatua, who signaled that he could be the long term All Black replacement for Jeremy Kaino.

A few hours later in Perth, the Western Force got a result, at last, from a typical dogged and often cussed performance. They had been banana-skin opponents for the Crusaders in the past but the Kiwis contributed to their own downfall this year by playing coast-to-coast rugby laced with handling errors. 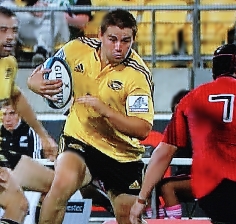 Team changes: The only change in the Hurricanes’ backline is that Chris Smylie starts at scrumhalf instead of TJ Perenara, who got a masterclass from old man Weepu of the Blues last week. TJ will get back on the horse from the bench.

Beauden Barrett remains at fullback even though the Canes lacked direction at first-five against the Blues.

There is a reshuffle in the pack. Jeffrey Toomaga-Allen starts at LHP and Ben Franks moves over to THP to replace Ben May who has an injured elbow. Dan Coles was supposed to return as hooker but Motu Matu’u  starts again because Coles fractured an eye socket at training.

Lock Jason Eaton gets a rest after starting in all of the Canes’ games to date and is replaced by Jeremy Thrush who returns from an ankle injury. Teenager Ardie Savea drops out of the side and is replaced by Jack Lam, who is ready to start a game after getting bench time following his knee reconstruction.

Force coach Michael Foley is resting two of his best-performing backs for this game.  Inside centre Kyle Godwin is out of the matchday squad and Alfie Mafi becomes a reserve.  Pat Dellitt returns to the starting XV on the wing whilst Winston Stanley returns to outside centre with Junior Roselea switching to inside centre. 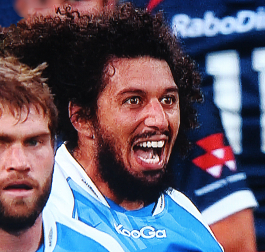 Sam Wykes – happy to be fit

In the forwards Ben McCalman is rotated out of the squad and Angus Cottrell takes his place on the blindside flank. Tetra Faulkner starts as THP, replacing Salesi Ma’afu who injured his knee last week.

Lock Sam Wykes got a bad knock against the Crusaders last week and must be happy to be fit enough to play.

Hooker James Hilterbrand from the Force EPS is named on the bench and will debut in Super Rugby if he gets on the park.  Although the 23 year-old plays for the Manly club and represented Sydney against NSW Country last year, he is a South Australian rugby product.

The Force don’t have the experience or zing in the backs to compete on equal terms with the Hurricanes; so they will have to pressure them to deny them time as the Blues did last week, and as they did themselves against the Crusaders. 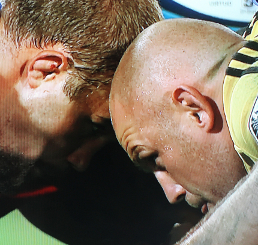 The Matchups: The Force scrum got shredded by the Crusaders a few times and despite all the changes to the Canes’ pack, the Kiwis will fancy themselves at scrum time.

And how will the new Force midfield pairing of Roselea and Stanley cope with Tim Bateman and Conrad Smith?

Opponent to watch out for: Moving over to the tight-head side of the front row won’t faze Ben Franks who mentioned a couple of years ago that he considered himself to be a specialist THP. Pek Cowan and his mates will have to scrummage better than they did last week. Incidentally, Franks ran down a Blues’ winger in Round 9,

Prediction: Like a lot of lowly-ranked teams the Force have problems playing two strong games in a row, but perversely they seem to play better against stronger teams than they do against weaker ones.

Last week was galling for the Canes as they had won four on the trot and had beaten the Waratahs comprehensively in Round 8. Moreover they knew that the Reds had just beaten the Chiefs, and that a victory over the Blues would have had them nipping at the NZ Conference leader’s heels. Instead they were embarrassed in front of their fans and will want to redeem themselves; so – Hurricanes by 8.

The Waratahs have fallen behind the Brumbies and Reds in the Australian Conference and are unlikely to catch up with them. They have shown some good signs in getting their backline running this season but they need to get their forwards dominating in collisions from now on to be credible opponents for the rest of the year.

Once comfortable leaders of the NZ Conference, the Chiefs now have the Blues at their heels and can’t afford to stumble against a side that struggles to play two good halves of rugby.

Last week the Waratahs had the bye, but in Round 8 they were in touch with the Hurricanes at oranges, but in the second half they made three errors in twelve minutes which the Canes took advantage of to score tries. They were outnumbered at many rucks which needed attendance, and when they were present they often lost the hit, or were otherwise out-muscled.

The Chiefs had their poorest game of the season last week and started to look like the problematic team of recent years. The Tribe had enough opportunities to win the game but the Reds rattled them with swarming defence and they blew several good moves. 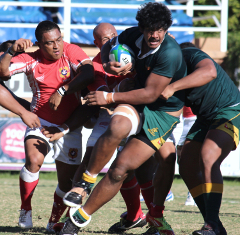 Will Skelton – feisty in the Pacific Nations Cup last month

Team changes: The Waratahs backline is the same except that big Cam Crawford replaces Pete Betham on the right wing. He makes his starting debut in Super Rugby after playing from the Brumbies’ bench for two minutes against the Force last year.

In the forwards hooker Tatafu Polota-Nau returns to the run-on XV recovered from having a tight hamstring, and proving his fitness after throwing his body around Coogee Oval for Parramatta last Saturday afternoon. No. 8 Cliffy Palu is also starting, having returned from injury in Round 8 via the bench.

If he gets on the park from the bench second-rower Will Skelton will be one of the biggest Australian players to play professional rugby.

Will missed all of last season because of a fractured foot in February 2012 and is yet to make his mark in club rugby. With ten other players, most of whom had showed promise in Sydney club rugby, he was invited to Tahs training when he was noticed in the Sydney National Academy group.  After showing promise in the Tahs’ environment he was given the vacant Waratahs’ EPS spot when Sam Lane withdrew. 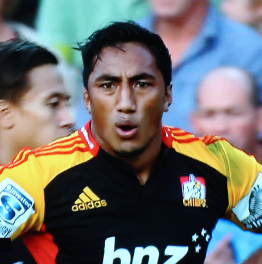 Bundee Aki – why was I dropped?

Skelton had been enthusiastic at the Tahs’ training sessions I saw him in, but I had my reservations because he was a bit of a gentle giant at school. However I changed my mind when I saw him have a couple of feisty games starting for the Sydney Academy team in the Pacific Nations Cup last month.

But I digress. In the Chiefs’ backline versatile Andrew Horrell gets a start at fullback instead of Gareth Ansombe, who set up Bundee Aki’s try against the Reds. Returning from having a bad back, Lelia Masaga starts on the left wing instead of Tim Nanai-Willaims who joins the reserves, with Anscombe.

Aki drops out of the matchday squad and his second-five spot is taken by Richard Kahui whilst Charlie Ngatai comes into the starting XV as centre.

The excellent scrummie Tawera Kerr-Barlow is still injured and Brendon Leonard gets a start despite playing poorly from the reserves last week. Gus Pulu is dropped to the bench.

Unfortunately for Chiefs’ coach Rennie, electrifying super-sub, Patrick Osborne, damaged a hamstring during one of his runs around Reds’ defenders in the last game and was unavailable. Talking of Rennie: he will be hoping that Anscombe’s goal kicking ability will not be missed whilst he is sitting on the bench. 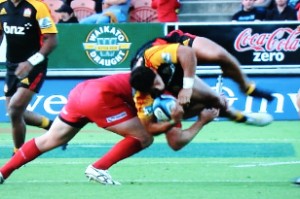 In the forwards LHP Pauliasi Manu, who was cut by new Blues coach John Kirwan, first, then by the Rebels for flunking a medical, second, returns from a rest in the reserves. In the backrow musical chairs game it is Fritz Lee’s turn to start, at no.8, with Tanerau Latimer sitting on the bench and Liam Messam returning to the blindside flank.

The Plans: The Waratahs have to look at the tape of the Reds’ victory last week and notice that the Queenslanders bashed the Chiefs in the forwards at the right moments to earn a legal right to slow their ball down. They got there in time to make a difference too, and sometimes got the hit in the tackle/ruck contest.

They will also have to scramble like the Reds did by adjusting their defensive cordon on the move, unlike what they did against the Hurricanes. As part of that they will have to react quicker on the transition when there is a turnover because the Canes killed the Tahs at the Cake Tin when the visitors were slow in adjusting.

The Chiefs will always get a few opportunities to score tries – it is the nature of the beast – but they have to rediscover the patience and good judgement using the ball when they were in their pomp. 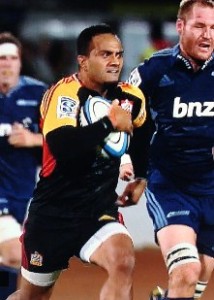 The Matchups: It will be interesting to see how Cam Crawford performs on the right wing in his debut match directly opposite the Tribe’s left winger Asaeli Tikoirotuma, who is not in great form but is due to have a have a top game.

But the best contest will be LHP Benn Robinson in the Tahs’ corner against THP Ben Tameifuna in the Chiefs’ corner, at scrum time. At 137kgs,Tameifuna is so big that a stumble from him can take an opposing LHP down to make him look culpable; but let’s see how Fat Cat goes against a big bopper who outweighs him by 25 kgs.

Opponent to watch out for: As mentioned last week Richard Kahui should be watched but Lelia Masaga didn’t play last Saturday, otherwise he would have got a mention. He doesn’t beat opponents by using the ball, but he has more moves than Bobby Fischer running with it.

Prediction: The Waratahs’ forwards have shown no evidence that they can swarm over opponents and impose themselves physically enough and early enough in the breakdown contests.

Their backs are developing nicely running with the ball but their kicking game, when needed, is inept. They routinely have trouble attacking from bad real estate and in exiting from their 22 on defence because their kicking is not long enough.  Since Carter and Turner are not in the side these days, their kick-chasing is not diligent enough either.

Unless the home team turns some of those things around the visitors should get back on their bike – Chiefs by 10.

Shane Sullivan’s preview of this game can be seen here.

Thursday’s Rugby News
Reds and Brumbies – Skirmishes Before The Battle!