RBS 6 Nations – Round 2 – Champions on the Ropes 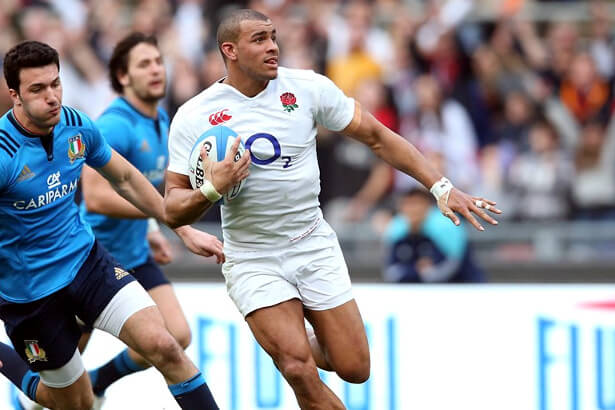 France and England continued their winning starts to this years RBS 6 Nations to emerge from the pack as the early front runners.

After a turgid affair in Paris, the game at the Principality Stadium was a much needed tonic.

Then the English in general, and Jonathan Joseph in particular, ran riot against Italy in Rome.

The wet weather played a big part in what was a dreary error-strewn affair in Paris.

Sexton opened the scoring after one of many late hits that the citing commissioner may have something to say about.

Ireland managed to slow French ball at the breakdown with both Best and O’Brien doing good work. O’Brien also made good metres with ball in hand before departing early due to injury at the end of the first quarter.

The Irish scrum was much improved from the Welsh game and they were on top in the lineout.

Sean O’Brien – his was the first of four fresh injuries for the already depleted Irish.

Sexton doubled the Irish lead from the tee ten minutes before half time only for Toner to give a soft penalty to allow Plisson to reply from the restart.

Sexton then restored the Irish margin following a scrum penalty to make the half time score 9-3. Poor handling meant Ireland’s six-point lead wasn’t much to show for their dominance.

At the start of the second half France rang the changes in the front row with regular starters Ben Arous and Slimani brought on after they had been dropped following their lacklustre display last week.

They had an immediate impact as the scrum changed from an even contest to a weapon for the French. It was upon that scrum dominance that they built their way back into the match.

France had plenty of ball in the Irish 22 and but for two interventions from Trimble they could have scored earlier. First, he chopped Vakatawa down as the big wing threatened the Irish line and then spoiled a pass that would have seen France go over in the corner.

With 20 minutes left a series of successive drives saw Chouly go over, but after consultation with the TMO, Peyper concluded that there was no clear grounding.

Maxime Medard – scored the try that sealed a narrow victory for France.

This set up a series of scrums from which Ireland were repeatedly penalised. As they packed the scrum again everyone wondered if Peyper would award a penalty try. There was no need for his intervention as France moved the ball quickly from the back of the scrum. With the Irish pack committed to the shove fullback Medard avoided the rush of Henshaw and scored under the posts.

The final ten minutes had France camped in the Irish half and the Irish challenge went out with a whimper.

Game Changer – France’s front row changes early in the second half swung the momentum in France’s favour and Ireland never got it back.

GAGR Man of the Match – Ben Arous – the turnaround in the scrum changed the course of the game.

Wales were pushed all the way by the brave Scots.

Wales dominated the opening and were rewarded in the sixth minute when Gareth Davies broke from on half way to score the first try of the game. Scotland did not take long to strike back when Seymour scored in the corner for Scotland after a incredible 21 phases of play by the Scots.

The rest of the half was pretty even with Scotland taking a 3 point lead into the break.

The first five minutes of the second half was more like watching AFL instead of rugby with all the kicking that was taking place. Finally North decided to run and created some space from nothing and was able to apply some pressure on the Scottish defence.

Near the hour mark Scotland unaccountably messed up a lineout five metres from their goal-line after the ball was delivered properly, and Wales pounded their defence before Jamie Roberts crossed five minutes later.

In the 70th minute North scored a brilliant individual try, when North got the ball there was no way you would have expected him to find the try line but he somehow stepped through the Scottish defence to cross for what should be try of the tournament.

Duncan Taylor – his try set up a tense end to the game.

In the 78th minute Ruaridh Jackson put Duncan Taylor into a nice gap that allowed him to score his  first try for Scotland.  The conversion made the margin four points which gave them one last chance, but unfortunately for Scotland ball control was absent and Wales won 27 – 23.

GAGR Man of the match is Jamie Roberts, for the second week in a row the Walsh inside centre had a massive influence on the game. Roberts is in career-best form in my opinion and will be the first picked in the Walsh line up for the rest of the tournament.

Italy played well in the first half in Rome to trail by only two points at half-time, but twelve minutes after the break a loose pass started England off on a scoring spree that realised 29 points in as many minutes.

The Azzurri played good rugby early and were able to play in England real estate. The visitors were out of sorts with a ropey lineout and had no flow to their game, but they took their one chance well after a good kick-chase by Mike Brown. When the ball was recycled, Billy Vunipola confused Italy by passing the ball, as it would, and George Ford scored in the corner.

George Ford – scored from England’s one real chance in the first half.

Italy trailed by only 9-11 at the break and it looked like Eddie Jones’ request that his men not leave an Italian player standing was hot air, but Italy had already lost players to to the medicos and they they had no depth.

At 52 minutes Azzurri winger Leanardo Sarto somehow did not see England centre Jonathan Joseph in his vicinity and his pass was intercepted gleefully for a try under the posts. England 18-9.

Joseph got another meat pie four minutes later after scrummie Danny Care threaded the needle with a grubber kick. It was harder work for his third as the lithe centre had to muscle his way over after Joe Launchbury recovered the ball and it had gone through hands. England 33-9.

England finished over the top of Italy with a try to inside centre Owen Farrell after a cracking offload by reserve hooker Jamie George.

Game Changer – it was the interception by Joseph in the 52nd minute but it was more of a alert for England to switch to another gear that hadn’t be used.

GAGR Man of the match – It was really Men of the match, because the England bench made the biggest impact on the game, whereas Italy had three bench players on already in the first half, and their reserves didn’t have the same quality of the visitors anyway.

If England can sort out their lineout and find out how to start better, they will be licking their lips when Ireland arrive at HQ in two weeks’ time.

The Wrap-up – France all but ended Ireland’s title defence in Round 2 while strengthening their own challenge.

For the second year running the Welsh made tough work of beating Scotland but they came through in the end to keep their title push on course.

Ireland have two weeks to dwell on the disappointment of Paris and to find some fit players for their trip to Twickenham where their role is likely to be potential party-poopers rather than genuine title contenders.

Eddie Jones had an easy first two games but for England the real work starts upon their return to HQ. I’m sure his charges will relish the opportunity to deliver the knockout blow to the defending champions.

While not quite a title decider the result of France’s trip to Wales will go a long way in deciding the new home of the RBS 6 Nations trophy.

Round 3 also sees the now almost annual wooden spoon decider between Italy and Scotland however Ireland aren’t out the reckoning and they wouldn’t be the first defending champions to claim this dubious honour. 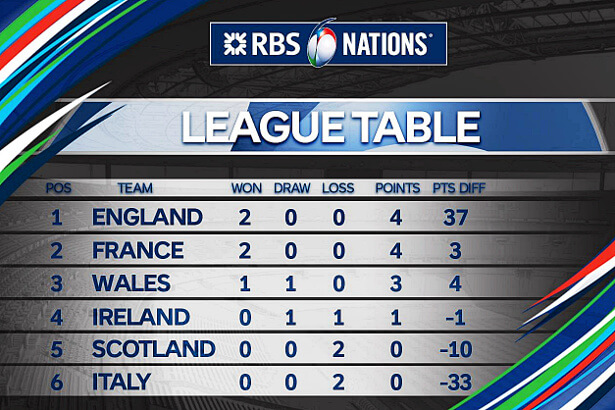