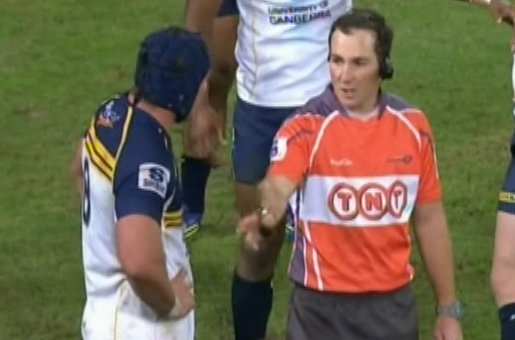 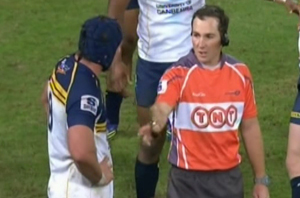 Each week I analyse the performances of teams and players that I feel most people want to discuss. Unfortunately this week the hot topic from the weekend is the performance of Glen Jackson, the referee in the Reds v Brumbies clash on Saturday night.

Between the 64th and 76th minutes of the Reds v Brumbies match on Saturday night the Reds had possession of the ball for all but one phase where the Brumbies kicked it out after the Reds knocked on from a lineout. The ball did not leave the Reds attacking 22 at any time in that period.

Whilst the pressure on both teams was incredible, the pressure on the referee was even more intense. He had to make decisions on the run, with bodies all over the place, a massive crowd roaring at him and a fair number of the players giving him unsolicited advice. The captains of both teams were also doing their very best to sway his opinion on what the other team was doing. I will never put my hand up to referee at any level because I just wouldn’t be capable of making those sorts of decisions whilst under pressure.

At the start of that sequence of play the Brumbies led by seven points and the Reds decided not to release any of the pressure they were applying by taking a shot for penalty goal from any of the seven penalties they received in that period and instead chose to push on for the try, which they eventually scored in that 76th minute. Of those seven decisions James Horwill only made four of them, each time after consulting with Will Genia, with three quick taps taken without input from Horwill.

How did the Brumbies keep the Reds out for those twelve minutes? There was some great goal line defence, there was good pressure applied at one of the Reds lineouts, there were probably too many phases from the Reds in tight when there was space a little wider and there were plays from the Brumbies that Ewen McKenzie and many others have called cynical.

I could write a whole article on the incidents that were penalised and those that were missed by the referee and we could debate those points for days. I believe there was cynical play from the Brumbies and that the referee missed penalties that should have been awarded in that period. However, I see little point in arguing about whether the decisions the referee made to penalise or not were correct because that is after all a subjective argument – none of us can say for certain that our view is right or wrong – all we can have is an opinion and as with most strongly held opinions, we’ll all probably stick with our opinion, no matter how much we try to convince each other.

The referee was the one on the field who was called upon to award the penalties or not, so for the purposes of this article I will work on the basis that the decisions by the referee to award or not award penalties (and advantages) were correct.

What I want to deal with are the facts of what happened with the penalties awarded in that twelve minute period because those are not subjective issues.

In the 64th minute Colby Faingaa was penalised for being offside and in the 66th minute George Smith was penalised for the same infringement. The referee then warned Ben Mowen saying “Any more like that and someone’s going to the bin”. That warning was a clear statement from the referee that he considered there had been repeated infringements by the Brumbies so let’s have a look at what the laws say about repeated infringements. Below is an extract from law 10.3 with my emphasis added. 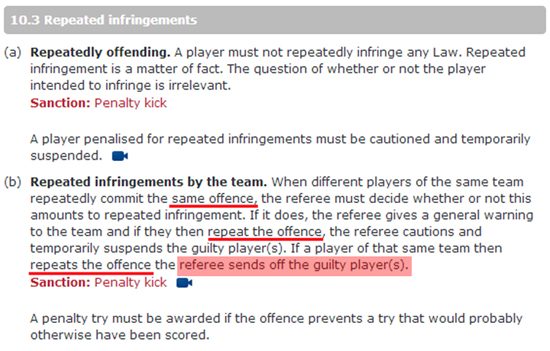 Having decided that two offside penalties in the previous two minutes constituted repeated infringements by the team, the referee warned the Brumbies, through Mowen, in accordance with the law. From that point on any Brumbies player who repeated the offence (offside) should have been temporarily suspended (issued with a yellow card or in the referees language – gone to the bin).

Once Daley was ruled to have been held up the referee confirmed to both Mowen and Horwill that the Reds had a penalty saying “James you’ve got a penalty over here for offside”. Now according to the law and the referee’s own warning to Mowen, Smith, who had repeated the same offence (offside) should have received a yellow card at that point – it is black and white that it was a repeated infringement by the same player under law 10.3(a) or a repeated infringement of the same offence by the team under law 10.3(b).

Is there an argument that even though the laws say one thing in black and white, they are often interpreted differently? Certainly.

What about a non-intentional infringement such as falling over in a ruck and not being able to roll out of the way? Look back to law 10.3(a) and you’ll see that the question of repeated infringements is a matter of fact – there is no consideration of whether a player meant to infringe or not.

Does the field position of infringements have any bearing? The law doesn’t say so but when issuing yellow cards you will often hear referees talking about there being too many infringements close to the try line or in the red zone.

What about a question of the time between infringements or between the warning and the infringement? Again the laws make no reference to the issue of time.

To answer these questions we need to look beyond the laws to see how they are interpreted. Guidelines are issued to referees and teams to clarify how the laws are interpreted – whilst these guidelines are not laws they form the basis for interpretation of the laws. As an example of how repeated or deliberate infringements are dealt with, below is an extract from the ARU’s published 2013 Game Management Guidelines (again with my emphasis).

There is no question that after three penalties in a four minute period, all for the same offence and all within metres of the try line there was a pattern of the Brumbies infringing. So whether you look only at the law or you look at how the laws are interpreted, the fact is that the referee got it wrong by not following through on his warning to issue a yellow card at that point.

The Reds decided to take another lineout from that penalty from which the referee penalised Scott Sio and this time issued a yellow card. This was not a penalty for offside so was not the same offence as provided for under law 10.3(b) but the referee was entitled to issue the yellow card as it was part of a pattern of infringements by the Brumbies. He could also have issued the yellow card without a warning for a deliberate infringement anyway, so in this case the referee got it right.

Having issued one yellow card, what should happen if another infringement occurs? If we look at law 10.3(b), any player who repeats the infringement (which is the pattern of infringements near their own try line) is to be sent off (issued a red card), not given another yellow card.

If we look beyond the law the ARU have previously published a handy guide which shows the sanctions for infringements. Below is an extract from that guide (which ironically I got from the Brumbies website).

As you can see, after a penalty and yellow card for repeated infringements the sanction for any repeat is another penalty with a send off.

In the 70th minute the Brumbies were again penalised within metres of their own try line when Ben Alexander didn’t roll away. Forget whether this was intentional or not because law 10.3(a) says that is not relevant. The referee again got it wrong by warning Mowen that “if there’s another one, I’ll go yellow again”. There was no option to give another warning or to issue a yellow card – Alexander should have received a red card at that point.

In the 72nd minute Alexander was penalised for a scrum collapse. That is another team infringement close to the Brumbies try line within a pattern of infringements, intentional or not. Even if there had not been a pattern that is a repeat infringement by the same player that was penalised for an infringement two minutes prior, which requires a yellow card under law 10.3(a). On top of that this penalty came two minutes after the warning the referee gave to Mowen that he would issue another yellow card, yet the referee failed to follow through and issue any card.

Just two minutes later the referee played an advantage to the Reds directly under the posts but allowed play to proceed before penalising Tevita Kuridrani for being offside five metres out from the Brumbies try line. This was clearly part of a pattern of infringements by the Brumbies and the referee should have issued another red card.

Even if you could somehow argue that this penalty was not a part of a pattern or that the the second warning given to Mowen four minutes earlier had reset the count, this was an infringement covered by that warning and a yellow card should have been issued. Once again the referee failed to follow through and his performance in that twelve minute period demonstrated why SANZAR was wrong to award this match to such an inexperienced referee, particularly when an experienced referee, Steve Walsh, was in Brisbane as one of the assistant referees.

Whilst players, coaches and referees will always make mistakes, there have to be consequences for any of those parties that perform so poorly and accordingly, Jackson should be suspended from Super Rugby for a short period and go back to a lower level to work on his decision making under pressure.

A final comment from me before everyone else has their say – if Jackson had done his job properly there is no telling what the result of the match would have been so I do not say that the referee cost the Reds a victory – that is just pure speculation and I see no point in that.

UPDATE: The other thing to consider about the use of a red card if there are further team infringements after a yellow card is that there is an equivalent rule for an individual who receives a yellow card – if they then infringe in a similar way again the second yellow becomes a red. Whilst you don’t see it often, the law is there and even though it has a massive impact on a match, it is an automatic upgrade to a red card, just as the team law is. When Drew Mitchell was red carded against the All Blacks in 2010 it ended any chance the Wallabies had in the match but the referee had no choice, just as he had no choice in this situation – it is not a discretionary matter for the referee.