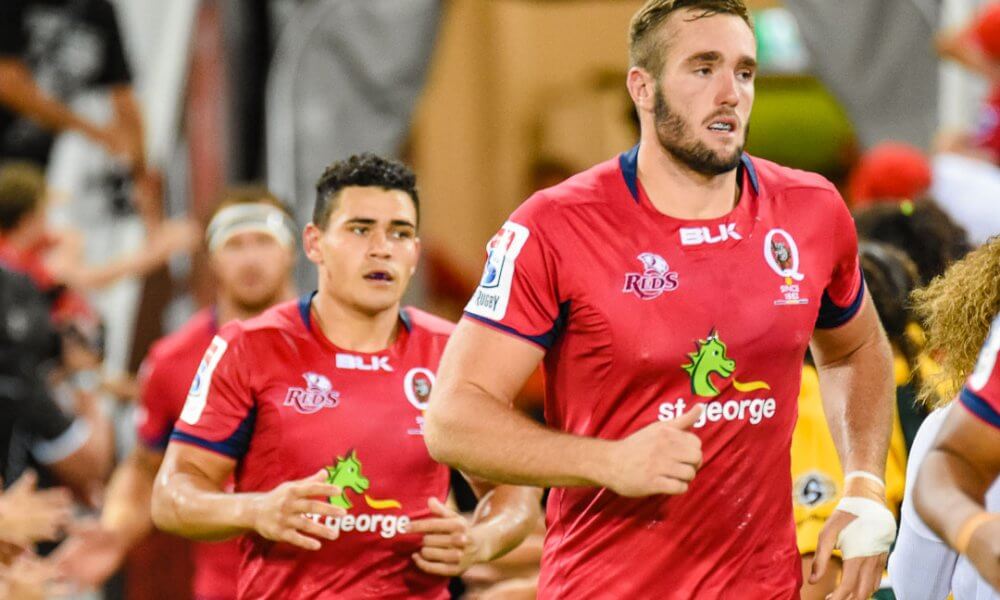 Reds Crusaders games at Suncorp Stadium have built up a certain mythical feel about them of late, more on the back of that amazing 2011 Grand Final than anything more recent.  There’s no doubt the Reds entered the game under the most pressure, on the back of their poor showing against the Force in Round 2.

Coach Nick Stiles didn’t hold back on his team early in the week and backed it up by making three critical changes to his starting side with Japanese international Hendrick Tui making his first start for the season, while young lock forward Izack Rodda and wing Izaia Perese would make their run on debuts.

The Crusaders also made three changes from their last outing with flanker Heiden Bedwell-Curtis and Peter Samu both coming into the back row while former Red, Digby Ioane, comes back to Suncorp on the wing. 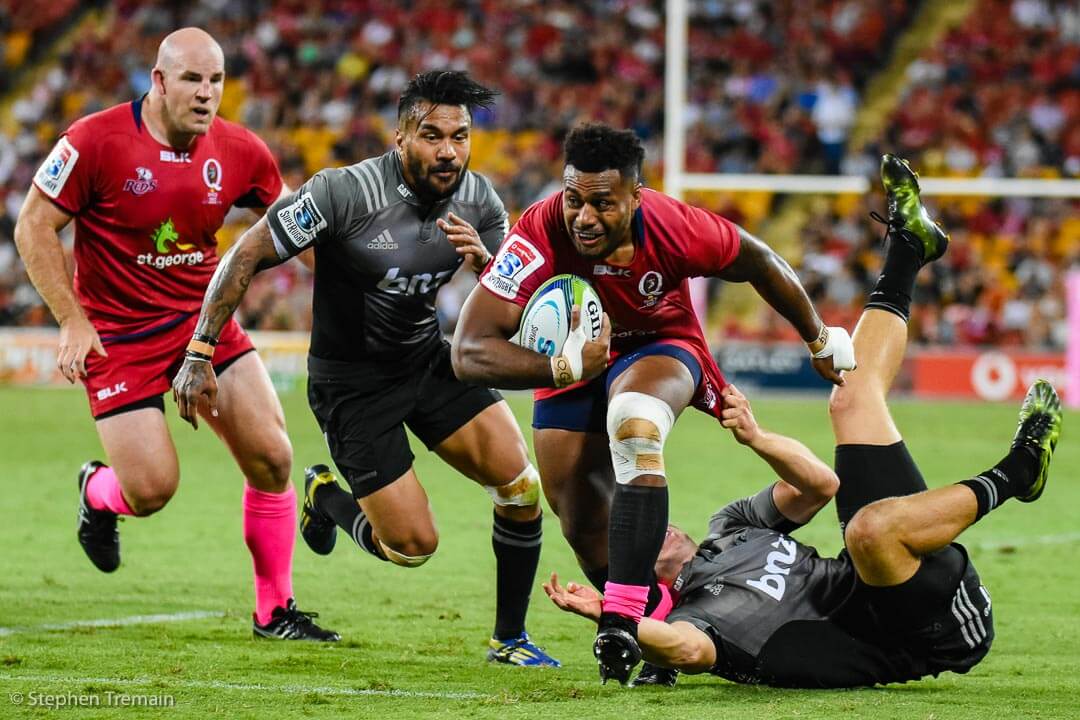 The improved intent was evident early on for the Reds with some aggressive work by the likes of James Slipper and Stephen Moore in tight. An early turnover by Moore put the Reds on the attack almost immediately before Rodda lost the ball while looking for an off-load.

Both Digby and Perese found their way into the game early, unfortunately for the Crusaders it was via a high tackle by Ioane on the young Red winger.

The Reds maintained the attack and a series of classy plays saw them pushing hard for a try very soon. A couple of smart Duncan Paia’aua passes looked to set them away, but they couldn’t convert. The home team had a number of chances to get across the line, and probably should have, before a wayward pass by Frisby went over the sideline. Thankfully the Crusaders were penalised and Quade stepped up to put the first points of the night on the board.

The Crusaders had their chance to even things up when Quade made a high tackle as the Crusaders returned an aimless Frisby box kick. The kick by flyhalf Mitch Hunt skimmed the goal posts and Paia’aua was able to clear and relieve pressure.

Soon after Quade put through a well-placed kick that would prove to be perhaps the defining moment of the half. As All Black Israel Dagg dived to catch the ball he knocked the it on and Digby picked it up in an off-side position. Worse still Dagg injured his knee and was forced from the field.

The Reds then opted to kick for touch and take the lineout to set up a rolling maul. After their Plan A failed, it was time to resort to Plan B – give it to Samu. They did and Samu did what Samu does – run over his opponent to score a try.

The Dagg injury was made worse when Seta Tamanivalu was replaced too and the experience in the Crusaders team was thinning quickly.

The Crusaders were even further on the back foot not long latter when Eto Nabuli was in for his fourth try in two weeks. Nabuli was the beneficiary of some brilliant Kerevi work who spun onto a flat Steve Moore pass to charge down field before dishing it wide to his winger.

The Crusaders suffered another back to back blow when George Smith snagged a key turnover followed soon afterwards by Aussie-born backrower Peter Samu being replaced for injury.

The Crusaders are masters of retaining momentum, however, and they did it through a delightful wide pass from Ryan Crotty that found space when it drew in a Nabuli misread. Ioane was the beneficiary out wide who found space and then put in a well-placed chip. The bounce of the ball then went the way of scrumhalf Mitch Drummond who barged over for his team’s first try of the game.

Perese was having an impressive first run on performance and did well to claim a Quade cross-field kick which put the Reds on the attack again. Once again the Crusaders gave away a professional foul and Frisby opted for a quick tap. The ball went wide with space seemingly available before Paia’aua spilled the pill in the face of some charging Crusaders defense. 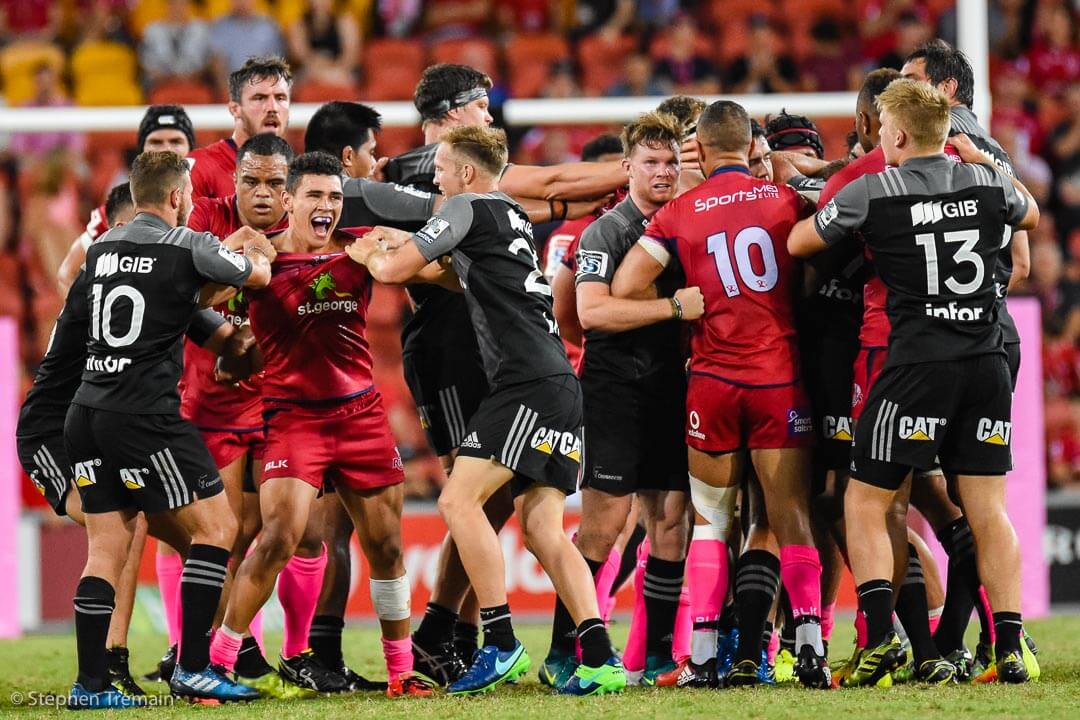 When Mike Alaalatoa was penalised at the scrum, the set piece momentum was changing, and Quade kicked the goal to extend the home team’s lead.

It is at this time that all teams are aware of the ability for kiwi teams to score crucial points before the break. It was the Reds that looked like they would go over but a poor pass by Samu to Rob Simmons in space, and then a chip kick by Quade that hit the upright, denied the Reds a couple of very real opportunities.

It seemed like the Crusaders would have the last say, however a wide pass floated forward and the Reds were able to close out the half 20-7.

Coach Stiles made changes to the Reds at half time when Kane Douglas replaced the impressive Rodda (head knock) and Andrew Ready came on for Stephen Moore (strategic), who had his best half for the Reds this season.

The Reds managed to keep the pressure on for the first quarter and probably more significantly the Crusaders were very un-Crusader-like in turning over the ball on regular attacking forays. The team was clearly missing the attacking abilities of their injured All Blacks.

Despite the Reds having the run of the play, including gaining ascendancy in the scrum, their first real point scoring opportunity did not come until almost three quarter time when Quade had a shot from about 45m out.

The kick was unsuccessful and the score remained. It became apparent that the next points would be crucial.

While the Reds probably needed to attempt to dictate the run of the game, but playing it deep and using their set piece.  Nick Frisby, who went to his box kick throughout the night, kicked deep but kept the ball in play. 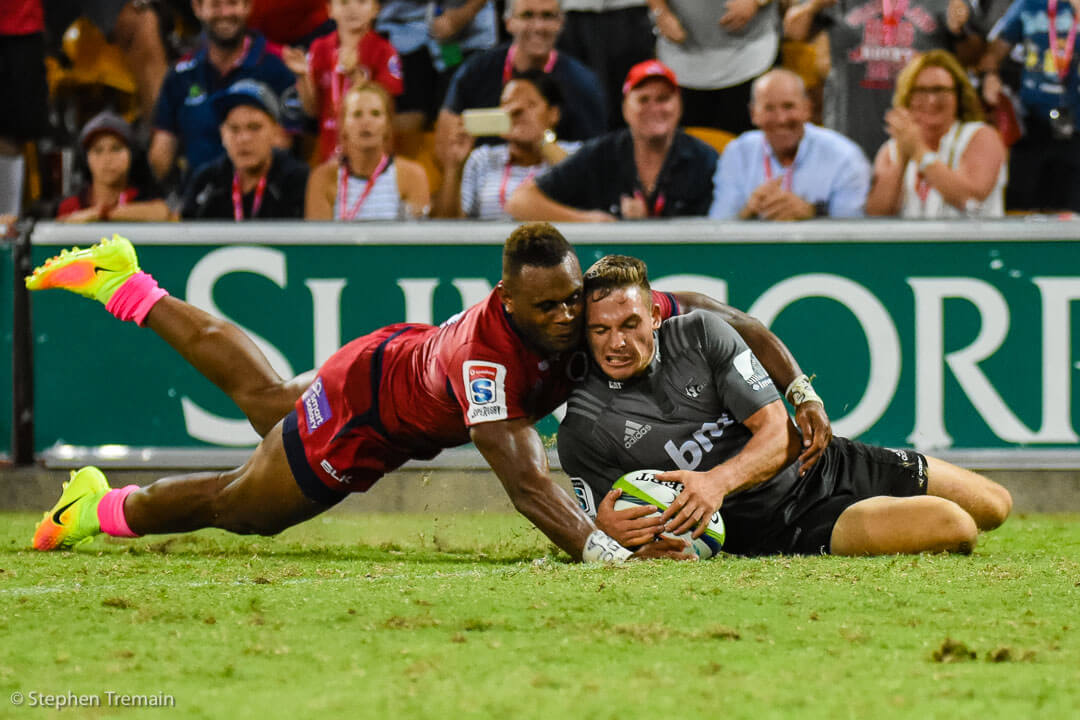 The ball found fullback Marty McKenzie on the full and it’s money for jam for the Crusaders from there. McKenzie found space and ultimately it was replacement scrumhalf Bryn Hall who dashed over for the try.  With the lead cut to just eight it was it still enough breathing space for the Reds with less than 20 minutes to go?

Replacement props Taniela Tupou and Marcus Vanzati (on debut as a late replacement for Sef Faga’ase) were brought on and the Reds strength at scrum time would soon be tested. On the first Reds’ scrum the Crusaders powered through the young Reds pack to gain a penalty. The penalty was soon reversed when Jordan Taufau threw a punch at Rob Simmons, and was yellow carded.

Theoretically it should have been enough for the Reds to secure the win. It wasn’t and if anything it seemed to trigger them into shutting up shop while the Crusaders remained calm and confident, particularly with the strong impact from their bench.

With still eight or so minutes left in the game when the Reds opted to try to slow the game down by keeping the ball and attempted to out-Crusader the Crusaders. The kiwis love that stuff and just sat back waiting for the turnover. It came and the kick downfield was knocked on by a very casual Cooper.

From the scrum the Crusaders looked to find their way over but a big Nabuli hit looked to give the Reds a chance down the other end of the field as Adam Korczyk chased the loose ball down. Play was brought back, however, for a knock on in the Nabuli tackle.

The Crusaders wouldn’t be denied twice and, after patient recycling of the ball, Hall was in for his second when he dotted the ball at the base of the upright. So the lead was down to one with only minutes to go in the game.

Karmichael Hunt’s defense was epic all night and once again he put in a big hit that turned the ball over and gave the Reds a chance to close out the match. It would come down to another Reds scrum where the rookies were under all sorts of pressure but held firm.

Once again the Reds opted to play the ball in their half and retain possession for as long as they could. The penalty was almost inevitable and came when Kerevi was ruled to have sealed the ball at the ruck. 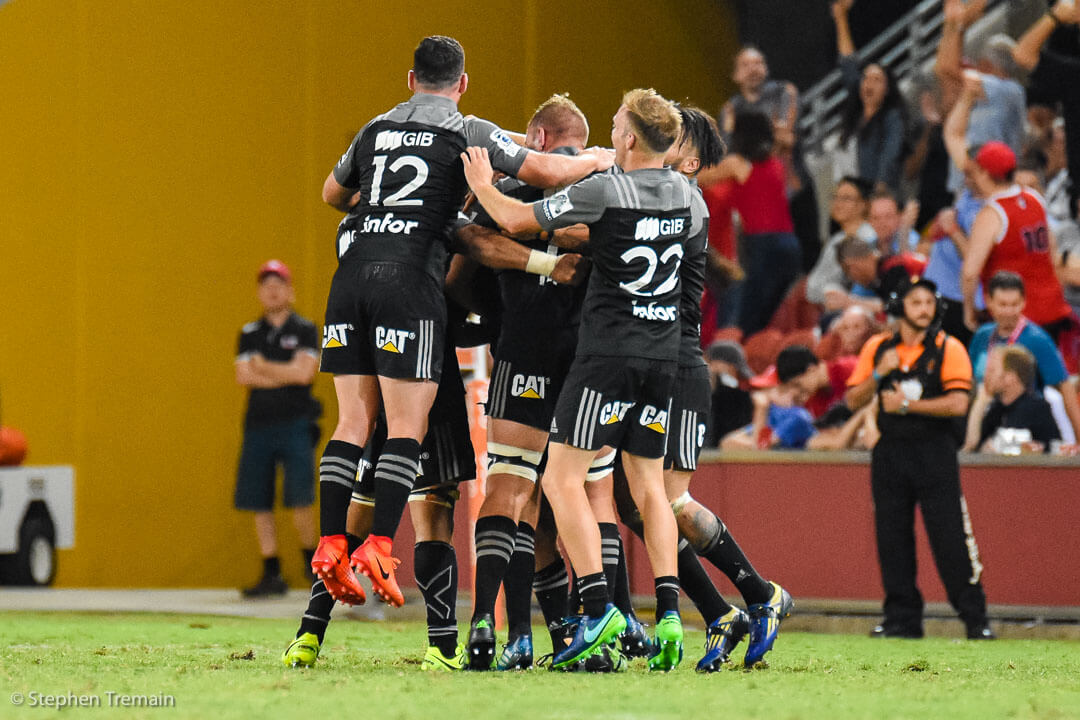 Crusader flyhalf Mitch Hunt stepped up to take the kick as the siren sounded. It soared through and the Crusaders were in front for the first time all night.

Reds coach Stiles was frustrated at his team’s inability to close out the match particularly their refusal to kick the ball down field and back their defense at the end of the game – an option more questionable with referees tending to go looking for penalties in this closing moments.

The Reds fly out Monday morning to South Africa where they will take on the Lions while the Crusaders head back home to host the Blues.

Ironically the yellow card to Taufua seemed to turn the Reds off as they looked to close the game out. It was in these ten minutes that the Crusaders scored all of their final 10 points to seal the game.

Hendrick Tui was wonderful for the Reds in his return to the run on side.  Digby Ioane ran for the most metres of any other player, while Sam Whitelock led by example. In the end it was the ice cool play of Mitch Hunt that kept is team in the game and ultimately won it for them.

Karmichael Hunt was epic in defense and dangerous whenever he handled the ball. While he mishandled on occasions, inside centre Duncan Paia’aua was one of the most dangerous players on the park.