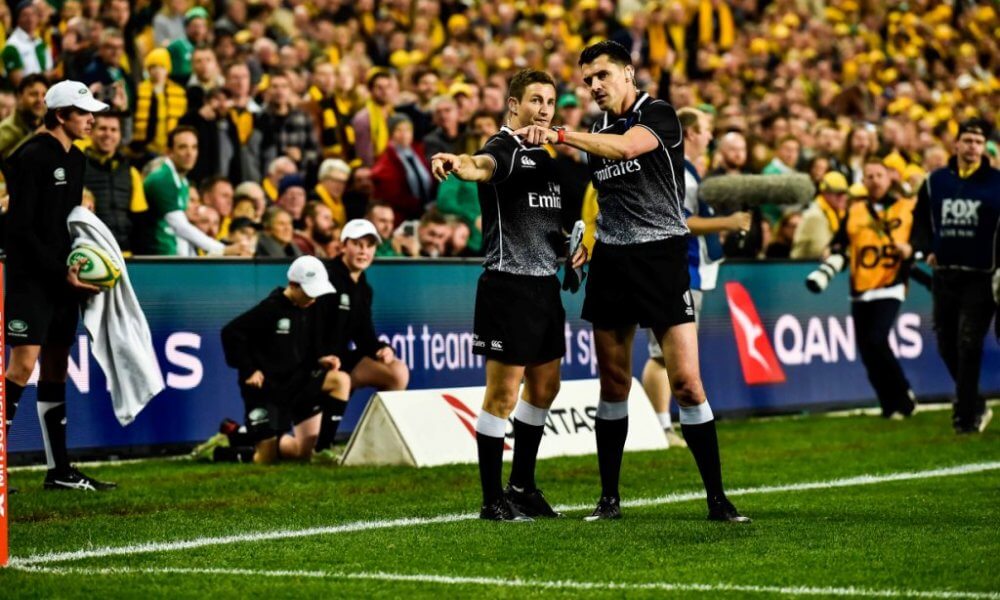 Let’s start with a quick disclaimer: Australia lost a series that they should have won. They lost largely because their discipline, game management, and accuracy at key moments was not as good as Ireland’s. On top of that, they scored 55 points across 3 test matches, or just 18 points a match, which is a reflection of a poor attack.

However, all that being so, the refereeing was really poor across the series. But in order to understand why , we need to think more conceptually about how the referees are being trained to manage the situations they see out on the field.

In Pursuit of Consistency

Starting after the 2007 World Cup, and accelerating after 2011, World Rugby has periodically issued directives instructing how the game is to be refereed. This project has had two elements: one, to introduce consistency and predictability in what coaches and players can expect on the field; and two, to reduce the distance between how different referees from different places control the game.

The former element has been something of a success: coaches know in particular that “focus areas” will be targeted similarly by all referees over the ensuing six months or so, but in other respects they have to wait to see what the feel is on a given day. The second element has, by contrast, been a huge success. Where ten years ago northern hemisphere and southern hemisphere refs operated at different paces, and sometimes looked like they were running different sports, today that gap has narrowed substantially.

The conceptual opening to achieve this has been to focus more on individual events: the tackle in a vacuum, an offside penalty in isolation, and so on. Referees are taught, through circulated videos every week, what is the right way to referee a tackle release and what is the wrong way, with examples from games in Japan, South Africa, and France treated exactly the same.

The problem with this approach, as we’ve seen in this series, is that focusing on the individual event has led referees to de-emphasise context. And yet, understanding the context for an individual event is precisely what distinguishes a great referee from a black-letter automaton, and the Australia-Ireland series showed this starkly.

Let’s start with foul play. Over the last couple of years, World Rugby has poured immense resources into minimising foul play and, in particular, reducing head injuries. Two areas have been the major focus of this campaign: contests in the air; and high tackles.

Almost no rugby person thinks that the new guidelines are a good thing for the game, or that they display much respect for what actually goes on on a rugby field. We’ve seen high tackle penalties given for contact that occurs four feet off the ground, which is just wrong.

The law that will be trialled in the under 20 second-tier competition in November—that tackles have to be below the nipples—is simply ridiculous. Fans have every right to wonder exactly who is coming up with these ideas.

The first major area of foul play in this series was tackles off the ball. Australia had a try called back in test one for a tackle on a dummy runner from Adam Coleman where he had very little chance to pull out. The play continued. The act influenced the play in no way at all. (There was also a quite different penalty, for a tackle off the ball, against Caleb Timu in test two, which was a clear penalty.) The TMO and referee together applied the individual event approach. Was there a tackle off the ball? Yes? Ok, try cancelled and penalty. No thought to the broader context of what’s going on in the game and how the act is affecting the contest.

Contrast that with a key moment in the second half of test three. Bernard Foley throws a wide ball past Kurtley Beale to winger Dane Haylett-Petty, who finds himself in more space than any back three player did at any other time on the night. Irish winger Keith Earls, also in plenty of space, makes a bad read, realises it, and continues his run, clattering Kurtley Beale to the ground. So, instead of two players with the ball in 15 metres of space—Beale and Haylett-Petty—the latter is on his own, and can only step and weave until the tackle is made.

Let’s be clear. Earls has been playing test rugby for ten years. He’s a pro. He knows exactly what he’s doing. Sure, he clatters rather than tackles Beale, but in doing so he has a major impact on the line break. A good referee understands the broader context—what Australia is trying to do with the ball, and how Ireland are killing that opportunity—and likely awards a penalty, with a talking to. (At 38 metres out and 15 metres in, Foley probably takes the kick for goal.)

The Rhythm of the Match

Re-watching the second half of test three is really hard for an Australian fan. Live, I thought we were fairly dominant. But on second viewing, it’s evident that we were really dominant. Except for one successful exit, and an Irish scrum late on where Conway is tackled into touch on the first phase, every single time Ireland got the ball, Australia got a successful jackal in. The problem was that they didn’t always get paid.

A key part of the explanation for why is context. In the second half, Australia were very inaccurate. But they were nevertheless able to up the pace of the game, holding the ball for extended periods in the right parts of the field, and add to that a heavy physical presence in the scrum and maul. Against all expectations, Ireland began to tire.

A good referee would realise this. He’d notice it every time the forwards came together to scrum, at the very least. From his experience, he’d know that tiring players at that level are usually good enough to still do their core jobs well, the ones where they are directly involved, like making a tackle or a carry. But where the fatigue shows is off the ball: in the accuracy of decoy runners, in the clean out, in getting back onside.

Sure enough, Ireland’s attacking clean-out, which was incredible all series up to that point, became inaccurate and lazy. In the 78th minute, Tolu Latu has to reach under the ball carrier to anchor himself on the ball, and still three Irish players can’t dislodge him. Same with other jackals by Tupou and Latu.

These are, on replay, just terrible calls by an international ref. But thinking about context helps refs to anticipate the pictures they are likely to see and get those calls right. The picture Gauzere saw in the 78th minute should have been one he was entirely expecting to see.

We can look at this inability to appreciate the context of the game—Australia’s relentless attack and Ireland’s inability to stick with them—from other angles. In the second half, Ireland conceded six straight penalties. Sure, they weren’t all tackle offences, and some were scrum offences. But they were strong evidence that Ireland couldn’t actually stay with Australia—and a good ref would be noting that trend and talking about yellow cards for repeat offences.

Or let’s take another angle. Across the three tests, Ireland operated a rush defence consistently. Australia had around 240 attacking rucks. Not a single offside penalty was given for that line either lining up in front of the last feet, or moving too soon. A good ref is thinking even before the game: What are the odds that Ireland operates that defence 240 times in a row and no single player ever gets it wrong in a material way? A better ref, noticing the fatigue in the second half of the final test at the end of a ten month season, is already anticipating that the line will struggle to stay onside—as indeed is pretty evident on the replay.

I want to be really clear here that much the same point could be made about the second half of the second test. Ireland were relentless in their attack on the Australian line. The men in gold tired, fell off tackles, didn’t get onside. The referee penalised repeatedly, but Ireland deserved a yellow card because they were forcing Australia into repeat offences.

Much of this is drawn from the final test, but I want to look at the second test for a moment where there were two identical calls that again bely this lack of appreciation on the context for the picture presented to the referee.

In the first half, Sekope Kepu was tackled, placed the ball into the Irish tackler, the ball rolled away, and Kepu was called for a knock on.

Then, in the last minute, Kurtley Beale got over the advantage line, Rob Kearney tackled him, and the ball comes out the side of the ruck. Again, the ref calls a knock on against Folau.

Again, those calls show no appreciation of context. The tackler has to release. He can’t roll into the ball placement zone. And these guys are professionals. So unless your own player dislodges it with a stray boot, what’s the odds of a totally messed up place like that? What are the odds of two, by the same team, in one match?
When the referee sees that picture, with tacklers all in the zone where the ball is, the penalty for a player not rolling away is the much more logical call. If the ref doesn’t see the knock-on (and in neither case, on replay, was there one), then that’s the default call.

World Rugby is due to re-assess their TMO and foul play protocols over the next couple of weeks. Good.

But I’m concerned that the focus on a handful of incidents will take the focus away from what we really need to improve the game: a philosophical shift to focus on offences that stop the attacking team’s flow. The new concentration on deliberate knock-ons, while overdone in practice, is a good start.

However, what we need is a much broader directive to referees to think more about what is going on in the match as a whole, and specifically the ways in which defending teams are using penalties to kill the play and the disincentive structure that exists to stopping them doing that.