Scrums are an endless source of debate in Rugby and even aficionados can watch the same scrum and come up with different judgements of which side got the better of it, and why. 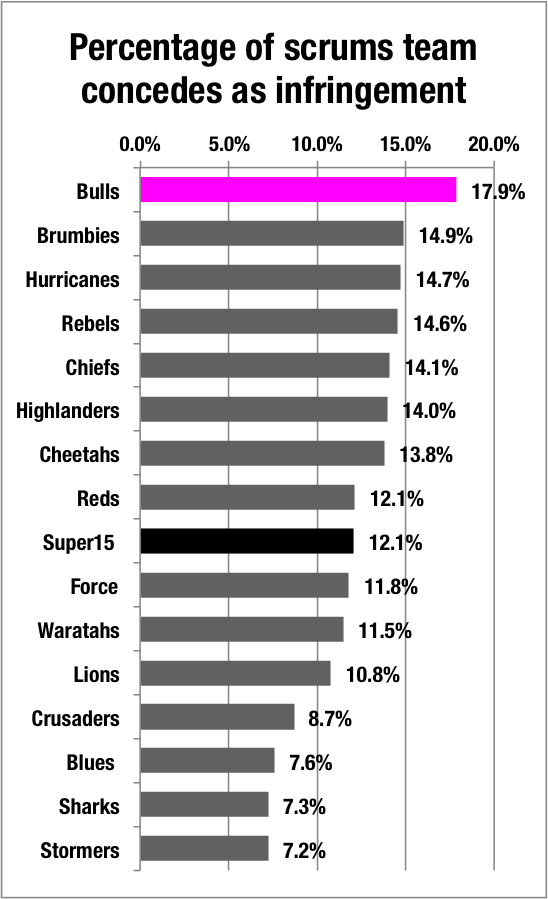 But at the end of the day, there’s one measure that really matters – who got pinged the most. Regardless of feed, ref, opposition. Who do refs perceive as having the dodgiest scrum – whether by mis-timed engagement, weak on hit or obviously boring is what ultimately matters.

So, by this one measure, you might be a little surprised to see who is clearly the worst offender, by some margin – the Bulls.

I’m outta time today, so I’ll let you guys get stuck into the whys and wherefores. But one observation I’d throw in is this – because there are only on average 18 scrums set in a match, leaking 4 penalties and free kicks in total might not seem, on average, like a game changer.

However, when it comes to the business end of the comp, and when a strong scrum targets a weak one, not only can that average underestimate the count in that game, it also underestimates the impact that these penalties can have at inopportune points in a match. We Aussies know this just too well!

And so, when you see once again the Stormers and Crusaders at the bottom of this log, you can only think this is another reason why these two will be strong contenders down the pointy end of the season.