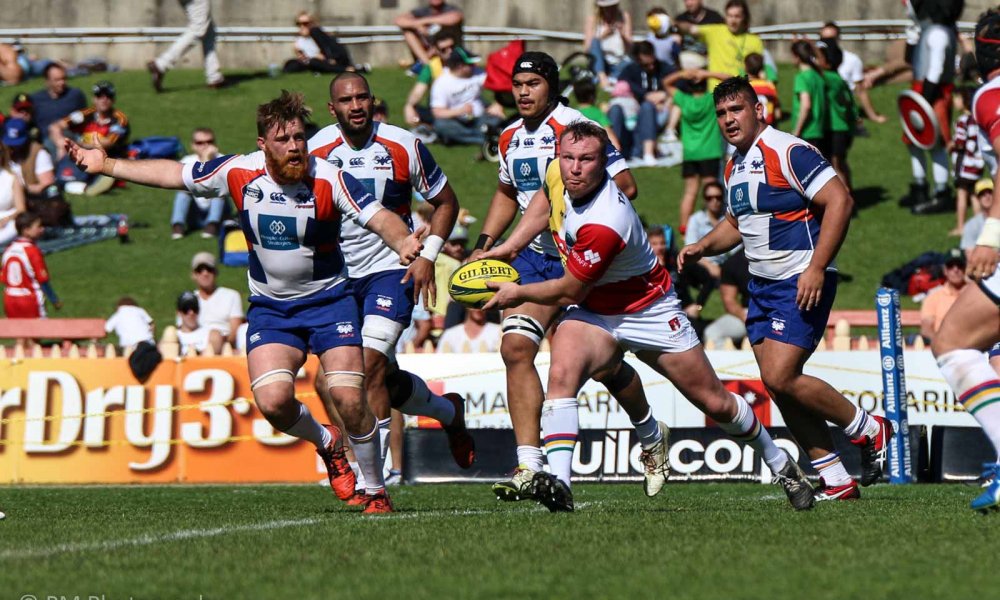 The Macquarie University Sydney Rays have started off their season securing their first ever win against cross town rivals Western Sydney Rams.  The 50-30 victory also equals the Rays highest ever points score in an NRC match and sends an ominous warning to other teams in the competition. 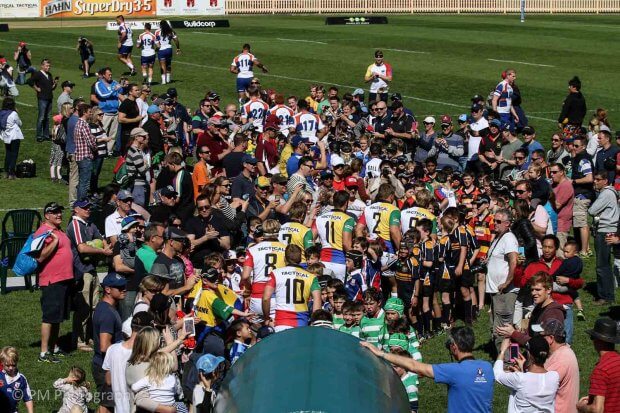 The sun was shining on a picturesque North Sydney Oval, with conditions perfect for running rugby and not a cloud in sight.

Arriving at the group an hour before kick-off, I was struck with the great atmosphere the oval had. The admin at the Rays did a great job showing games featuring the under 7s, 8s and 9s on the field before kick-off, giving us a charming club rugby atmosphere that continued throughout the day. It also did wonders to the crowd attendance, as many of the kids and their families stuck around afterwards to watch the main game. While most of the stands were looking pretty sparse, the Doug Walters Hill looked an absolute treat).

The Rays and Rams were keen to start the season off on a high. Prior to the game, the Rays had played the Rams twice, losing one and drawing the other. Angus Ta’avo was a late withdrawal for the Rays, with Lawrence Hunting and Mitch Lewis coming in to fill the void. 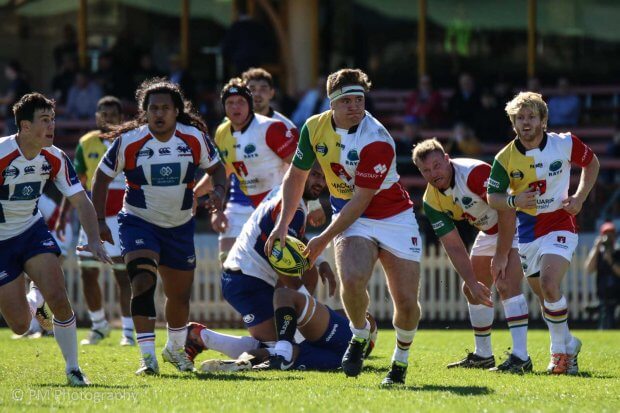 Okay, I gotta get this off my chest. Just when we thought there wouldn’t be a clash of colours in this game, the Rams came out with an all-white away jersey. While I’m all for alternative jerseys, they couldn’t have picked a worse time to debut it. The Rays came out in their new Harlequin jersey (itself featuring plenty of white). The referees were also in white, and rushed to find an alternative jersey, setting on a blue one. Oh NRC, how we missed you.

Following their two-week preparation at Macquarie University sports fields, the Rays came out firing in the first half, unleashing a potent backline that scored three tries inside the first 15 minutes, (including an intercept try to Harry Jones), and with Angus Sinclair converting all three, the Rays were out to a 24-0 lead.

After the first fifteen, the Rams began to work their way back into the game with more possession, and their pressure from the forwards was well rewarded when Brandon Paenga-Amosa crashed over twice to bring the score back to 24-14. However, the Rays hit back four minutes later, getting the crowd on their feet with tries to Waratah Jack Dempsey and Norths back Irae Simone to extend the Rays lead. Sinclair converted both and gave the Rays a 38-14 lead going into the break.

The second half saw the crowd enjoy a mighty battle between the forwards of both sides. Dempsey found himself yellow-carded in the 49th minute for a dangerous tackle, and the Rams capitalised, slowing down the game and playing to their strengths. Their forwards were rewarded for their dominance, with two tries to Rhys Allen and Filimone Tufui to reduce the margin to a just converted try.

A war of attrition then began to occur between the two sides in the last twenty minutes. The Rams soon found themselves down to 14 men as well when Jack Payne was sent to the sin bin in the 65th minute, and the Rays capitalised with substitute scrum half Dewet Roos scoring less with less than ten to go to take the Rays out to a 44-30 lead. 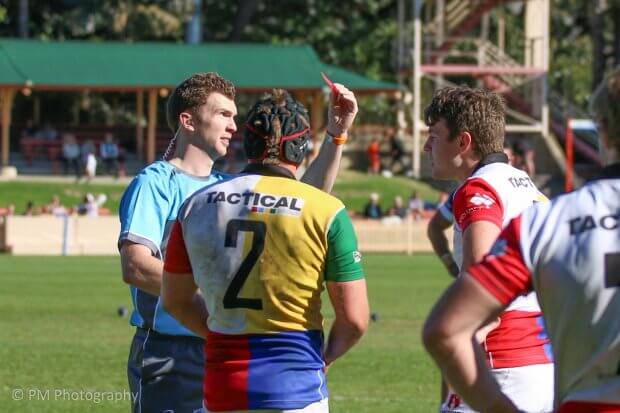 Jack Dempsey receives a red card for his second yellow of the game.

Despite having Dempsey sent off for a second-yellow card, the Rays were able to hold on, with Northern Suburbs winger Richard Woolf scoring after the siren to give the Rays the bonus point. The try capped what had been a riveting and entertaining match played in great spirit, even though the score line didn’t reflect how much the Rams pushed the Rays.

For the Rays, it was the perfect start to the season. Simon Cron has looked to instill a fast flowing style to the Rays rugby, and for much of the game they succeeded, with the backline at times lethal. The Rams struggled to keep up in the backline. The Super rugby experience in the scrum for the Rays also proved to be a deciding factor, making for a really exciting contest with the Rams big forward pack.

Despite the victory, Matt Lucas believes that the Rays have plenty to work on.

“There was a bit of an element of the unknown, bringing this new group together in a short amount of time, and really knowing how it was all going to pan out. We needed that first hit out, and while we were pretty good in patches we were also poor in patches, so we will have to work through that and take it into next week’s game.”

With the Spirit upsetting the Rising in Perth, Lucas seems well aware of the challenge ahead of them next Friday night: “With defense, we need to do a lot of work there. A lot of the [Rams] play revolved around our defense, relying on offloads and half breaks to play on the front foot, so if we can aim up a little bit there and still maintain our own structures I reckon that will put us in good stead.”

While many of the Horned Army will be disappointed with the result, there is plenty of positives to take away from the game. The big and intimidating forward pack of the Rams were what kept them in the game, and they were dominant for most of the second half. The Rams should take a lot of confidence out of that game. They have a tough ask next week, travelling up to Ballymore to play Brisbane City, but it is sure looking like they will be a much harder side to beat in 2016. 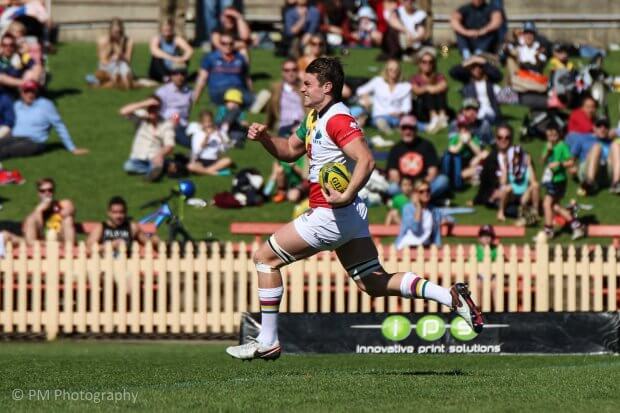 The Rays race away for another try v the Rams

Yellow cards had big impacts on the game. The yellow carding of Dempsey in the 49th minute sparked the Rams into their fightback and nearly led to clinching the victory. However, a yellow card to Payne in the 65th minute also proved to be the Rams undoing, with the Rays themselves capitalizing with a try and pushing onto the win.

Matt Lucas for the Rays. While not scoring any tries, the skippers experience proved invaluable, and his management of the troops on the field led to the victory. He is a player going places at the Waratahs and the performance of the team is a reflection of that.

Oh, where to begin?! Irae Simone was stellar in the backline for the Rays, being instrumental in many of their tries and bagging one himself. For the Rams, they have found themselves a potentially dangerous runner in Fabian Goodall, who was the stuff of nightmares out on the wing and looked dangerous every time he got the ball. In the forwards, Rhys Allen stood out in a brilliant forward pack performance for the Rams, being a powerhouse in the ruck and picking up a try for his efforts. That Rams forward pack is something special.