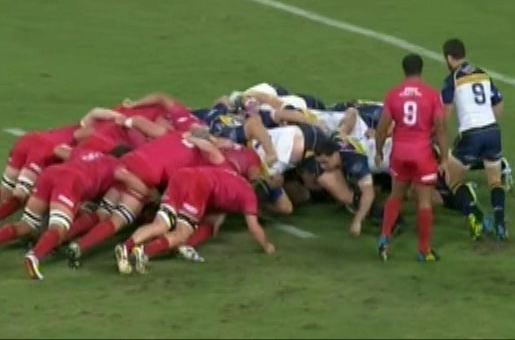 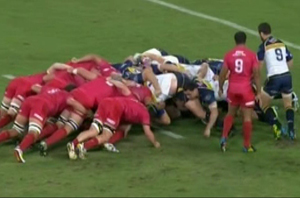 We’ve all been lauding the powerful Brumbies scrum in 2013 and there have been plenty of suggestions that the Wallabies should just pick the Brumbies front row to start the first test against the Lions. There’s also been a lot of comment about the weakness of the Reds scrum.

Dan Palmer told us recently on the Podslam that the Brumbies are trying to use their scrum as a weapon to attack the opposition and coming into last weekend’s match between the two teams I commented that the Reds scrum would really have to step up to combat the power of the Brumbies.

How did the two teams perform in this crucial area? There were twelve scrums in the match – seven fed by the Brumbies and five fed by the Reds. The Reds won all of their scrums (100%). The Brumbies won five of their seven (71%) with Ben Alexander conceding two penalties, one for going to ground under pressure and the other for having his hand on the ground.

So, a pretty clear victory for the Reds – they not only thwarted the Brumbies much vaunted scrum but they dominated, or so the stats say!

Let’s take a closer look at the scrums to see whether there is any difference between the stats and which scrum was dominant.

Firstly, let’s look at which scrum went forward – that’s always a pretty good sign of which scrum was dominant. Even if the opposition feed the ball and win it, if your scrum is moving forward that signals you’ve got the opposition under pressure and there’s a good chance that dominance will lead to some return later in the match if you can keep that pressure up.

In the video accompanying this article I’ve included a graphic for each scrum indicating which scrum was going forward and importantly, which side of the scrum was going forward. This analysis helps us to work out which props for each team were most effective, which would also indicate they got good support from the lock and flanker in their pod.

The other thing to watch out for when trying to work out which scrum is dominant is which team is folding in or going to ground under pressure. This is where the analysis gets really interesting and opens up the opportunity for a debate! If a prop folds in or goes to ground, was it a result of something illegal the other pack did or does it indicate which scrum is weaker? Here’s my view on each scrum:

On that analysis the Reds were dominant in five scrums and the Brumbies three, with four neutral.

Analysing the scrums in three different ways – percentage won, moving forward and under pressure – the result is the same. The Reds were the dominant scrum in this match.

Holmes was the dominant prop on his side of the scrum in this match but has been a penalty magnet this year for the Reds earning 15 penalties against him and Alexander’s not been much better for the Brumbies, conceding 13. Alexander, Palmer and Slipper must all be in contention for the Wallabies starting pack but in my opinion, Alexander’s scrummaging doesn’t warrant his inclusion as anything more than a bench option.

I believe Benn Robinson should start at loosehead for the Wallabies with Palmer and Slipper the options to start at tighthead. Palmer has been scrummaging really well this year and his general play has also improved. However, Slipper showed in Saturday night’s match that his scrummaging is close to par with Palmer and his general play is much better.

Slipper played the full match on Saturday whilst Palmer only played 60 minutes. Palmer made nine tackles, missed one and only ran the ball once – he was also first into just one breakdown. Slipper made ten tackles, missed one and ran the ball eight times – he was also first into eight breakdowns. If he continues to scrummage well, the difference in general play numbers in Slipper’s favour is too big too ignore.

Surprisingly after that performance, Palmer made the Green & Gold Rugby team of the week ahead of Slipper! Regardless of which of them starts at tighthead for the Wallabies, I expect the other will be on the bench together with Alexander.