One of the main highlights for me this year has been the way the not so obvious teams have stood up and given great accounts of themselves. The Lions in South Africa and the Rebels in Australia have both shown they’re on the right path to doing something in the next couple of years.

I think we often forget the Rebels are a relatively new outfit – they only started in 2010 – and I think with the quality of teams in Super Rugby we sometimes get ahead of ourselves expectations wise when a team like the Rebels gets a result. Forgetting you have to build sustainability and a legacy – these are not things that just happen. I also like that the Rebels started out as a team of oddities, a rabble of misfits that over the 6 years it’s existed has mutated into this current squad of mainly Australian qualified players.

Over the last few seasons they have brought through some talented youngsters; Reid, Fainga’a, McMahon, Debreczini and Stirzacker. With those younger names mixed in with the older heads in a lot of ways they remind me of Connacht in the Pro 12 – a team seen as slightly below it’s older more established siblings but actually are developing into possibly the best of the bunch.

Of course they have a long way to go but I think we’re really seeing the roots of a long game here from the club, and on the field it’s notable that their game improves season upon season. Tony McGahan is doing a superb job with limited resources. He’s got the team starting to click and we’re seeing far more productivity from their forward pack, who it seems are able to carry and mix it – if not with the best in the competition – certainly the best Australia have to offer at the moment.

This is also starting to replicate through to the backs, and in the half-backs Debreczini and Stirzacker, I honestly think they’ve found future Wallabies.

Stirzacker for me is probably the form 9 in Australia right now. That might seem like a bold claim but I think he’s consistent in performance and, yeah, he might throw the odd wild pass, but he’s a fighter and in many ways his sheer dog and physicality reminds me a lot of Nick Farr-Jones. While he’s got a long way to go to reach Farr-Jones heights, I like that he’s not too flash and that he’s just a solid worker who does what he’s there to do.

Debreczini is also impressive, he’s big and physical by 10 standards, but he is that without any compromise in skills and tactical nous. He just seems to have a nack for making the right decisions at the right time, he can get the ball around the man, or he can fire a late miss pass into the gap. He’s also got a booming boot on him.

Ok, they are not quite there as a unit, but their over all effect on the Rebels has been excellent, and I really think we’re seeing an excellent backline starting to take shape. Key is that Inman and Ellison are both players that can carry or pass, and that gives Debreczini options. That ability for them to play both styles has allowed them to also start utilising things like the Diamond formation and screen passing that we flag in the video above and as you can see below: 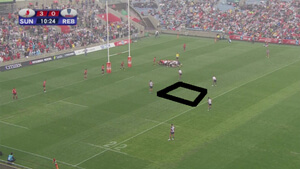 The Diamond formation is nothing new, Bath in the UK use it a lot. It can be a difficult pattern to master but for an attacking fly half like Debreczini it’s perfect, because he can leave his decision making late allowing him to pass flat or deep right on the tackle line.

You can see Debreczini has 3 options; short outside, or the two drifting runners who will slide around behind to create the overlap. We see it executed perfectly with Tom English’s try, where English and Debreczini run the slide line in behind take the deep pass and Debreczini fixes Tatekawa and English is home free.

Now fine, it doesn’t always work and they nearly blow a try against the Waratahs where the formations timing goes wrong but when you start to see these passing patterns popping up in phase play, and forwards understanding their passing options under pressure, you know the teams on the right track.

Obviously the Rebels aren’t the first Australian team to use these kind of plays and patterns, the Waratahs, the Reds, the Brumbies all use it, but I think it’s important to understand that they are teams with years of structure and this kind of play behind them. In contrast the Rebels are really just introducing their first generation of ‘homegrown talent’ (as such).

As I say they aren’t going to win the tournament, but I think they can give a few more bloody noses like last week against the Waratahs, and I think we’ll see more and more of the young Rebels players pushing the more established Wallabies for their squad places.