Despite a very Australian backline trotting out for the Barbarians last weekend, another Wallaby international season has come to an end. How should we judge it?

Of course the most important criteria are matches won, trophies gained. On that front, it’s mixed news. Of the important silverware (the ones whose names I can remember) there’s no Bledisloe, Tri-Nations or Cook Cup to lay the table around the Mandela Plate.

On the win percentages, however, things are on the up; it stands at 60 per cent for 2010, up from 43 per cent in 2009. No doubt there’s plenty of headroom there, although had two more of those Giteau kicks gone between the sticks, the win rate could be up at 73 per cent.

Looking at try scoring overall, this year on average the Wallabies scored three tries a match, and let in two. Last year those figures were two tries scored and one conceded. Before decrying the Wallaby defence too much though, it’s worth noting that New Zealand’s conceded try averages for those two years are exactly the same as Australia’s (the only difference being that they on average scored four tries a match this year). So it would appear that this probably has more to do with the way the game is being played than the defensive frailties that Austin demonstrated in his latest post.

Clearly though, the Wallaby attack has improved. The seven try romp to finish the season at the Stade de France was no isolated incident. The Wallabies outscored the Boks 5 tries to 3 in Bloemfontein and the All Blacks 4:3 in Hong Kong. Figures from the spring tour show that New Zealand and Australia are in a different league from the rest of the world in terms of try-scoring ability — and this is with the Wallaby backline still improving and with some unanswered questions, like who is the first choice inside centre? 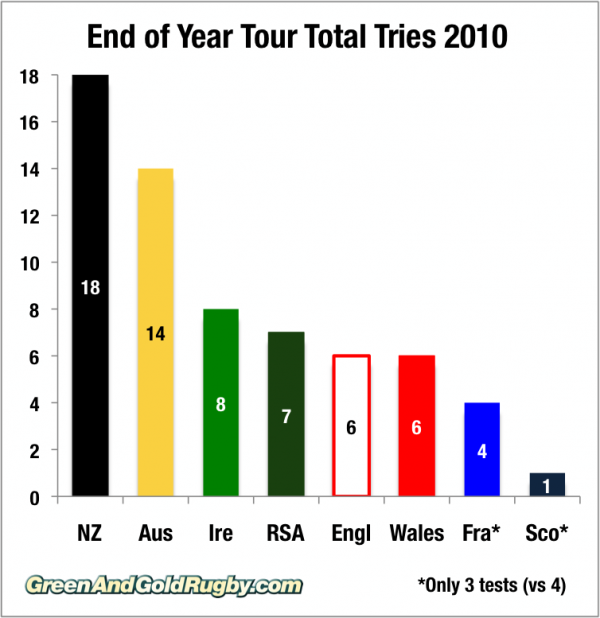 However, you don’t have to dig too deep in the team’s stats to identify the largest gaping hole in their performance. Below is the number of scrum penalties awarded against teams over the recent spring internationals, compared to the rest of the penalties they conceded in all other areas. What you’ll notice is that outside their scrum woes, the Wallabies had the equal best disciplinary record with France. The Wallaby scrum penalties, however, were only outdone by Fiji. 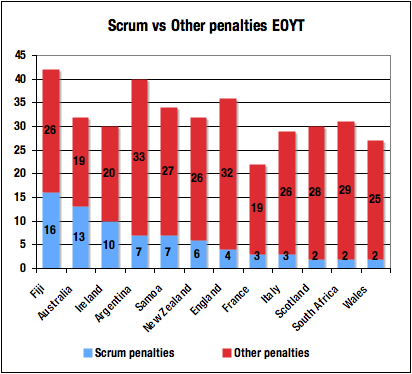 The price of a weak scrum is not just penalties, or even penalty tries and yellow cards, but the morale- and energy-sapping impact that can turn a match. It is undoubtedly still a huge cause for concern.

While one set piece struggled, another improved out of sight. Over the year the Wallabies won 88 per cent of their own line-out, while their opponents averaged 78 per cent. On the end of year tour they topped the own-ball completion rate table (again with 88 per cent) together with South Africa. This was up from the 74 per cent Australia had managed in the 2009 Tri-Nations.

In the first half of the season restarts were a problem; ceding possession in your own half is suicidal in the current form of the game. Against England in Sydney and then New Zealand in Melbourne the Wallabies gathered only 20 and 14 per cent of received restart kicks. However, by the spring tour, the retention rate had reached 94 per cent. On average this year they regained 10 per cent of their own kick-offs.

But what these numbers don’t talk about are the achievements of the Wallabies in 2010: the first Wallaby team to win on the High Veldt in more than 40 years, the only team to beat the All Blacks, a record score at home against the Six Nations champions France, and the regaining of second place in the world rankings.

More important than any history book entry though, was what that has meant mentally to the young team that’s achieved it. They can beat the two other best teams in the world in pressure situations, at the death. They can also turn a faltering tour around, and put away a top-tier side convincingly. These “deposits in belief” have been crucial to the squad’s development; they may not be “the daddy” yet, but they’re no longer the prison bitch.

As the team has developed, so have a number of individuals. What was so poignant in those dramatic wins in Bloemfontein and Honkers was that it wasn’t an old timer guiding the Wallabies home with a cool head, but two of the youngest prodigies in the team — Beale and O’Connor. A year ago these two, and others like Pocock and Cooper, were kids making cameos. This year they took roles in the global consciousness of the game — Beale and Pocock with IRB player of the year nominations, O’Connor with a starring role for the Barbarians. What will another year bring?

Using the Dwyer Theorem of requiring at least five World XV players to have a real shot at Bill, the Wallabies are moving toward an interesting position. For run-on places as of today’s date, I would put forward Moore, Sharpe, Elsom and Beale. So that’s four, with Pocock only edged out by Richie McCaw. Other players that we know either have been, or could be in the World team include Robinson, Genia, Palu and in recent years, Matt Giteau. So that’s eight or nibe players within coo-ee of a spot in the World XV.

Players that you can argue for and against, but most world coaches would love to have, include O’Connor, Cooper, Polota-Nau, Ashley-Cooper and Mitchell. Within a short amount of time, I believe each of these too can challenge for an outright spot.

So to an overall rating for the Wallabies in 2010. Yes, there have been big disappointments: the losses to England, the 49 point pantsing in Melbourne at the hands of New Zealand. There are also still clear areas requiring attention. However, it’s impossible to say that this year has not been significant improvement over 2009, and that in some areas of the game they have been excellent.

Ultimately, the Wallabies are second in the world, and deserve to be.