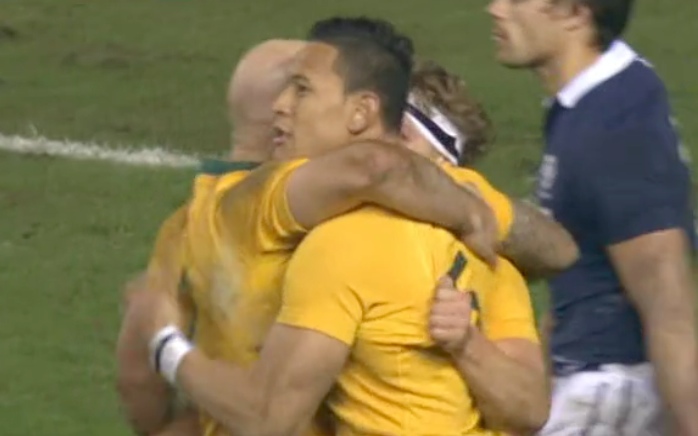 A patchy field and a patchy performance saw coach Ewen McKenzie’s Wallabies win their third test in a row for the first time under his control.

The match was destined to be a ‘banana skin game’ given Scotland’s recent history against us, the unfavorable conditions and the hard-line stance Link too against some of his key players. In the end they team got away with the win, and weren’t ever really troubled, but how did they perform individually? Here’s how I saw it:

Was bloody busy all game. By some reports, topped the tackle count, which is a mammoth effort. Has continued to battle away all tour whilst many were calling for Robinson’s inclusion, but it’s hard to fault his effort. A massive heart which is vital for a prop. 7

Another solid game from the in-from Moore. Isn’t it remarkable how the confidence in your game can lead to other minor parts coming to the forefront too? I mean how many tries has Moore now been involved with the direct lead up to this tour? (seriously, how many, can someone let me know?). A solid enough scrum and a mistake free line out are more kudos for Moore. 7

Had a very good first half, despite some discipline issues. Made a real impact around the ground through a couple of big hits and he was close to my best of field for the first 30 minutes. Unfortunately he couldn’t sustain it come the 2nd half where he went largely unnoticed until he was replaced. 6

Copped a yellow card for an awkward looking punch and then the expected backlash on social media. But this has been a quality tour from Simmons. His work rate is high, and he’s even becoming somewhat of an effective ball carrier, with much improved body height. Bloody good in the lineout too. 7

Another step closer to the Horwill of old. Some strong up front tackes, but also some crucial covering ones. He was solid with the ball in hand too, but really made an impact at the ruck. With Fardy and Hooper, he is the forward that contributes the most in this element of the game. 7

One of Fardy’s quieter games I thought. Didn’t provide the impact we’ve come to expect from him and you would’ve thought the conditions would have suited his abrasive style of play. Still, an average Fardy is pretty Fardy good.  6

Much improved on last week – in that he wasn’t yellow carded. Just another typical Hooper game. A high work rate, sure, but it’s his aggression at the ruck that is the stand out for me. That and his crazy eyes.   7

Two key plays in the closing moments of the test were highlights in a busy performance. Strong in defence but largely anonymous ball in hand, Mowen must take a lot of credit for a dominant lineout performance.  Which begs the question – why continue taking shots at goal with a dysfunctional kicker and a strong lineout? At the very least he should have called up Quade or Harris to kick. 7

Kicked more than his flyhalf, which seemed too much. The dodgy pitch, and its unstable nature, surely made the box kick and inadvisable option.  Still guilty of taking a few steps to pass on occasions. Was effectively harassed by the Scots. 5

Remains one the Wallabies’ most influential players and clearly one of our most dangerous. Set up both tries, but when the opportunity was there for him to really control the match in a way that the likes of a Michael Lynagh or Dan Carter may have, he didn’t. Will enjoy having a few more runners outside him against Wales. 7

He scored a try, sure, but gees he looked lost. The proverbial deer in the headlights. Perhaps this is just his laid-back style, but he didn’t look to involve himself too much. Could take a leaf out of Cummins’ book in using his bulk and just charging ahead, rather than those little ‘skip jump setps’. Somehow managed to position himself outside the touch judge at one stage. Like I said, a little lost. 6

Worked hard for the Wallabies, but with no real impact. Made plenty of tackles (apparently not missing one), but didn’t provide any of the guile or play making that Matt Toomua does. Should have been given the kicking tee at some stage. 6

This was always going to be a tough ask of Lealiifano, to run in the unfamiliar outside centre channel. Like many Wallaby 13s (up until Tevita Kurindrani) of recent years, he seemed to be sucked into some invisible vortex and went largely unnoticed. Except for his poor kicking which ultimately could have cost the Wallabies the match. 5

Not really a winger’s game but Tomane didn’t exactly stake his claim for a jersey against the Welsh week when Adam Ashley-Cooper and Nick Cummins return. Needs to produce more consistently to prove his worth. 4

Smashed it. This man just seems a class above any other back in, dare I say it, world rugby? Rarely have we seen someone who is such a consistent threat with the ball in hand, every time he runs. Now his defensive reads are improving (note the try saving tackles) and add in his safe kicking game, and he’s World XV quality. 8 (GAGR MOTR)

Made a noticeable impact when he came on for Kepu including pulling off the biggest hit of the game. 6

Another bench player who made a strong impact, securing an important penalty at the ruck. Really should be a much more productive runner than he is though. 6

Wasn’t good. Unsurprisingly booted the ball away the first time he got it and the rest of his touches were equally non-impressive. His decision making seems to be under most question. 4