Staff member
Jed Holloway should return this week as his suspension has ended.

Presumably Tolu Latu will not be playing.

The Tahs will also be hoping for Jack Dempsey to return from injury (I am not sure on the timeframe from that).

My expectation is that the Tahs won't rest anyone this week unless Kepu or Simmons need to be rested for two matches still as they have to win this game to stay alive.

What's the lowest ever Tahs crowd?

Yeah, it could be challenging it this weekend.

I'm unfortunately away this weekend so won't be going again. This is easily my lowest attendance season in over a decade of being a member. My wife and I are going to manage only 3 of the 8 home games due to other commitments (mostly being out of Sydney).

Tahs starting to develop a pretty strong bench, particularly with Holloway back. Bring all of those guys on, and we really don't lose much in any position.

Jaguares are potentially a tough ask. Depends I suppose, on their selections, and on their commitment.

wamberal said:
Jaguares are potentially a tough ask. Depends I suppose, on their selections, and on their commitment.
Click to expand...

The Waratahs haven't managed to beat them yet from their two attempts. 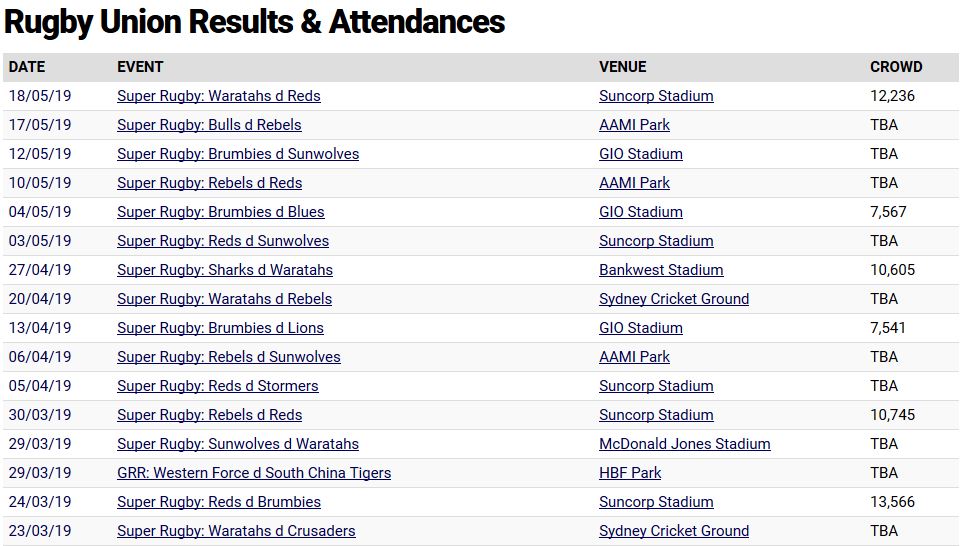 I believe Kings are playing Waverley at 5pm as a Curtain raiser, that may prompt some extra bums on seats.

Forward pack starting to look a bit more substantial with Robertson back and HJH available on the bench. But the Jaguares have a lot riding on the game, needing to keep winning to take out the SA conference. I think the up- tempo pace they play at will put a lot of pressure on the likes of Foley, Hunt and AAC. Jaguares by 1.

Brumby Runner said:
But the Jaguares have a lot riding on the game, needing to keep winning to take out the SA conference. I think the up- tempo pace they play at will put a lot of pressure on the likes of Foley, Hunt and AAC. Jaguares by 1.
Click to expand...


Given that there is probably only one team in the whole shebang out of the running for the semi-finals, there are fourteen teams who do not want to give up a point right now, let alone give up a win! Every one of those teams is desperate. The only sensible forecast at this stage is that there will be many more upsets in the next fortnight as teams fight tooth and nail for a spot in the eight.

I cannot remember ever having so many teams still with a chance of making it a month out from the finals. Maybe back in the Super 12 days, but due to my advancing years I just can't remember.

The teams who trouble the Waratahs most are the ones who keep it in close and seek to overpower them. Teams with a more attacking style allow the Waratahs speed merchants to engage in 1-1 combat and eventually expose their mistakes. I am expecting it to be close, I will be shocked if its a blowout either way, but I think the Tahs just might win this one on the back of another KB masterclass.
F

Good intensity so far, neither side dominating. Still 0-0 after 24 mins

AAC is having a solid game too

Jags are controlling the game without too much threat. Tahs have defended well but must be fatigued. Will want to get their hands on much more ball second half


It does happen every few years...