Catch up on the latest and greatest for the #SIRU2020 Season here...

We're starting to see some club announcements making the rounds for coaching etc.

SIRU AGM is set down for 24NOV19 11am at Shimano's. No doubt we'll see some more information coming out of clubs leading into the zone AGM...

Who's coaching City ? - anyone know

Send Tahs to central west ? Bad idea, I'll need to vent my strong feelings on some other club then ! Its more a case of dont send them away because they are sucessful , the rest of us just need to get better. The comp will not improve in quality with the removal of the a side.

An announcment was made regarding Citys first grade coaching team internally on tuesday and in various media platforms on wednesday. For those of you who missed it : Ben Schreiber has taken on that first grade role. A former soldier turned teacher now , he has a wide range of rugby and league experiences under his belt - including Shute Shield level.
Hes a pretty driven sort of guy - I think hes going to make a big impact in SIRU this year.
A

Came to the Zone earlier this year and noticed Waratahs supremacy

It's good to see a few of these things locked in now, there's been a bit of action on the different social media platforms across the clubs which is a positive sign.

Lots of touch footy etc being played by clubs which is great to see!
A

went and watched the schoolboys finals last night in Wagga

The players and spectators deserved better we all thought

Was this schoolboys final held at Connolly Whistle, or one of the other grounds in Wagga?

I see that Hay Cutters announced they will be fielding a first grade side in in season 2020. Good on them for having a dig. I'd be curious to see how the structure with Deni will work as second grade side for them ? Im assuming thats what would happen ?
A positive is that it will mean a true home and away season with 9 first grade sides - a negative is that it means more byes.

Whistle Happy said:
Hi PB - all the schoolboy games were played at Conolly

As far as the Hay situation it must be rememnbered that they didn't even qualify for the 3rd Grade Grand Final this year - Griffith defeated Deniliquin !!!= Deni defeated Hay in the Preliminary Final ?

Deni however to be vey competitive in 2nds that's for sure
Click to expand...


You must be fun at parties.
P

The Cutters did not enter First Grade thinking it would be easy to 'step up...They entered because they knew it WOULD BE HARD. The Club has a very good group of ladies in the Cutlets Ladies team, and for the girls to get a go in the competition, it had to provide a FIRST GRADE team..The Club wanted it, the players wanted it....and the supporters wanted it. Teams travelling to Hay will appreciate the excellent facilities at Hay Park Oval..Magnificent ground, great changerooms and a covered Grandstand. Visiting teams will be treated to the legendary Hay Cutters Hospitality. The Club will have a strong group of players for selection, the Cutlets will be competitive, and the junior Cutters, The Whipper Snippers, are going from strength to strength..Don't be afraid of travel, it is not as far from Wagga to Hay, as it is from Hay to Wagga - and the Cutters will do more travelling during the season than any other CLUB. Travelling distance does not FRIGHTEN the Cutters..They embrace it......From little things big things grow......."Walking through the Saltbush"
P

The Hay Cutters Rugby Union Club has been elevated to the top division of Southern Inland Rugby Union competition for the 2020 season.
The announcement was made at the Club’s Annual General meeting held at the Hay Bowling Club last Wednesday.
The Club has also nominated a team for the Women’s Ten a side tackle competition, following a successful debut season by the Cutlets in 2019.
The Cutters, as a Club, was desperate to see the Cutlets get the opportunity to ‘grow’ - and in order to achieve that goal, the Cutters had to step up into the top grade.
The Cutters had success in the First Grade in 1998, when the Jim Ives coached team won the (then) Romano Cup with a thrilling last minute win over Leeton Phantoms, with Cutters five-eighth Declan Horan landing a pressure penalty goal to snatch victory from the jaws of defeat 25-24.
The Club has had success in lower grade competitions such as the McMullen Cup, but matches at home were sporadic, and the move back into First Grade against the ‘big boys” and larger communities will be played on a home and away , providing plenty of Rugby for the key Union supporters in Hay.
Manning Doughty has been re-appointed coach for the ‘re-entry” and has recruited Bernard Schiller, Charlie Wythes and Shannon Mitchell as assistant coaches.
Cutters coach Manning Doughty said he and the Club were looking forward to the challenge ahead,
“ I see it as the best way forward for the club. It won’t be an easy road but it will be rewarding if we hook in.
“Charlie Wythes has come on board to concentrate on conditioning the players so that we are physically ready and Bernard will be helping to coach the Cutlets.
“Shannon is again doing defence and skills while also helping Rob (Neill) on the sideline. 30 years of Cutter Rugby in 2020.” the coach said
He said that the return to the top division for the Cutters is just what the players have been asking for.
“They want to test themselves against the best. They know it will be hard and wins may be few and far between, but they are doing it because it is hard, and not because it will be easy.
“The players will need to be fitter than ever, so it means they will be required to lift their efforts on the training track. I have no doubt that the boys know what to expect and can lift themselves for the challenge ahead” the coach said.
The Annual General Meeting was very well attended, with the Cutters, Whipper Snippers and the Cutlets well represented.
There has been a change in the leadership of the Club, with long term President Justin Campbell and hardworking Secretary Catelyn Jubb both ‘retiring” from the Club’s administration.
Mr Campbell has held the top post for 11 seasons - in two stints -(Jock Campbell was President in 2014), while Ms Jubb has been Secretary for the past seven.
Both Justin and Catelyn were given thanks by all in attendance for the diligence and excellent manner in which they carried out their duties.
Campbell’s position as President has been taken by a Cutter stalwart Simon Booth, a man who has legend status with the Cutters’ faithful.
Simon has had a long association with the Club, is a Life Member and a player who played a ‘motza’ of games with the Club starting in 1993 and being a member of the 1998 premiership victory.
He has been heavily involved in the growth of the Junior Cutters through the Whipper Snippers, with his children being players in that ‘arm of the Club”.
The Club was unable to fill the Secretary’s position, Catelyn’s shoes being a tough task to step into.
The position has been held ‘open’ and it is expected to be filled soon.
Deniliquin Drovers will follow the Cutters in the draw, as a second grade team. Clubs will remain as separate identities.

Good on Hay for stepping into 1st Grade, numbers are going to be important to them and they'll need to bolster their playing stocks I'd say.

The Hay/Deni 1st/2nd Grade partnering will be interesting, I wonder if that split will be 50/50 for them?

Looking at the 3rd Grade competition, I suppose this means that Thirsty Thirds will become basically Wagga/Griffith/Tumut. Which will mean Tahs/City/WAC/Griffith/Tumut which is probably enough footy for those clubs.

If there is less footy for Ag College will that mean more players at Reddies perhaps?

It’s a shame the schoolboys final was played on a substandard field. Usually the surface at Connolly is very good. I can see where Whistle is coming from Kartman. Because of work commitments and injuries Hay really struggled for numbers in their semi final appearance the day they played Deni here at Griffith this year. Good luck to them but if nothing has changed since last season ???
P

"It didn't happen overnight, but it did happen" 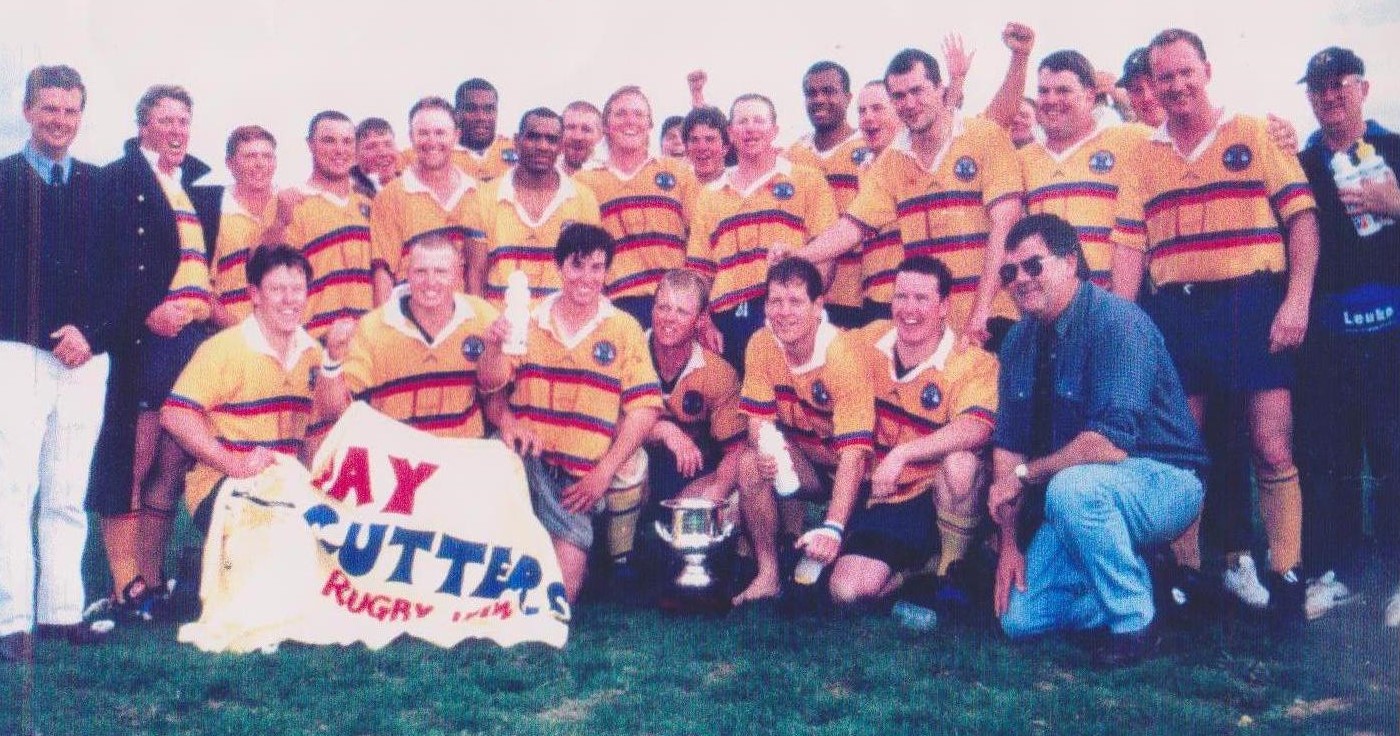 Most of the Zones and Sydney finish up at the end of August I think
Click to expand...


You only have to go back 5 or 6 years and SIRU was finishing in late september as a matter of course. I'm reasonably certain that we had a GF on a 25 degree day in late september 2011 (bar sales were great!) between aggies and albury.
I think the Hay cutters (judging by the articles and posts) are being pretty realistic about a debut first grade season. Speed of first grade games is what I suspect will really test them. Whatever happens I believe a 9 team comp is a step in the right direction.

Just a thought , but there was a well established side with very competitive first grade and womens under 100km to the north of Wagga. Got their own ground as well - dont share with leaguies or anyone ! I wonder if they were asked ?

yourmatesam said:
If there is less footy for Ag College will that mean more players at Reddies perhaps?
Click to expand...

Reckon you know the answer to this question mate, HAHAHAHAHA

Whistle Happy said:
With Hay now in 1st Grade have all the coaches for next year bee appointed

Not sure who is looking after Tumut and Ag College but it looks like the same coaches for the other Clubs next year
Click to expand...


I know Jonno Andreou is Coaching Ag College, I'm not sure what's happening with Tumut though.

Maulalltheway said:
Reckon you know the answer to this question mate, HAHAHAHAHA
Click to expand...


It wouldn't be a bad thing.
O

The proposed grand final date of 19th of September clashes with Aggies Race Day. Wouldn’t the logical way to avoid a clash and shorten the season by a week would be by culling the City v Country bye??
The RIverina Footy league went head to head with the race day this year and the result was RFL with there lowest gate this decade while 7000 were at the MTC. Can SIRU really afford a drop in gate takings?
You must log in or register to reply here.
Share:
Facebook Twitter Reddit WhatsApp Email Share Link
Top