Staff member
Hi guys Empire is covering the West v Easts game today but we still need info for 2 other games.
If you're going along to either of these games we would like some feed back. It can be a little or a much as you like. A simple scoreline and general feel for the match with the name of a standout player will make all the difference.
Thanks Sully and Empire.

If you come, they will build it!

Yes, some more input would be great guys - there is some great rugby being played around the territory - especially with a lot of the Brumbies out and about for local teams.

It's killing me writing about Easts at present. Tough times - and probably (definately) getting a tad repetitive detailing just how tough the guys are doing it.

Staff member
Will try and get to Gungahlin v. Uni-Norths

Will have a match report/photos from Eagles v Uni-Norths later.

How come I can't add the Vikings logo to my supported teams?

Staff member
Above my pay grade Slim.
You need to talk to Moses. Or you can add their colours manually.

Nicholls oval saw the third placed Gungahlin Eagles take on the fifth placed Uni-Norths Owls. Both teams had a number of Brumbies squad players returning to club rugby with Ben Alexander joining Ian Prior in the visitors and Ita Vaea and Cam Crawford suiting up for the hosts.

With the Nicholls Nor-Wester at their backs, Uni-Norths dominated both field position and territory in the first half. Some rugged defence from the Eagles held out wave after wave from the Owls and it took only one chance in the Owls half for Eagles winger Cam Crawford to streak away untouched under the posts to open the scoring.

It was another mistake from the Owls at the back that led to the Eagles scoring again, this time a kick was unable to be secured and a simple toed through ball was picked up the Eagles saw the score at 14-0.

The second half saw both teams step up their play with some physicality being thrown in for good measure. The referee was having a tough day and could have used his cards more than he actually did. A total of three yellow cards were issued on the day - two for Uni-Norths and one to Gungahlin - although many warnings were given, some repeating previous indiscretions that left supporters of both teams less than impressed and offering some 'friendly' advice.

As the half wore on the Eagles seemed to lift their game with their defence leading the way. Another two tries were added for the Eagles with one from long range after Uni-Norths were camped on the Eagles line and looked like finally breaking their duck.

Right on full time, Waratahs bound Crawford clinched his second of the day with another runaway effort untouched under the posts to make the final score 35-0.

The final scoreline seemed harsh on the Owls but it was their lack of execution and failure to score points with the wind at their back plus the Eagles defence that saw the score end up the way it did. 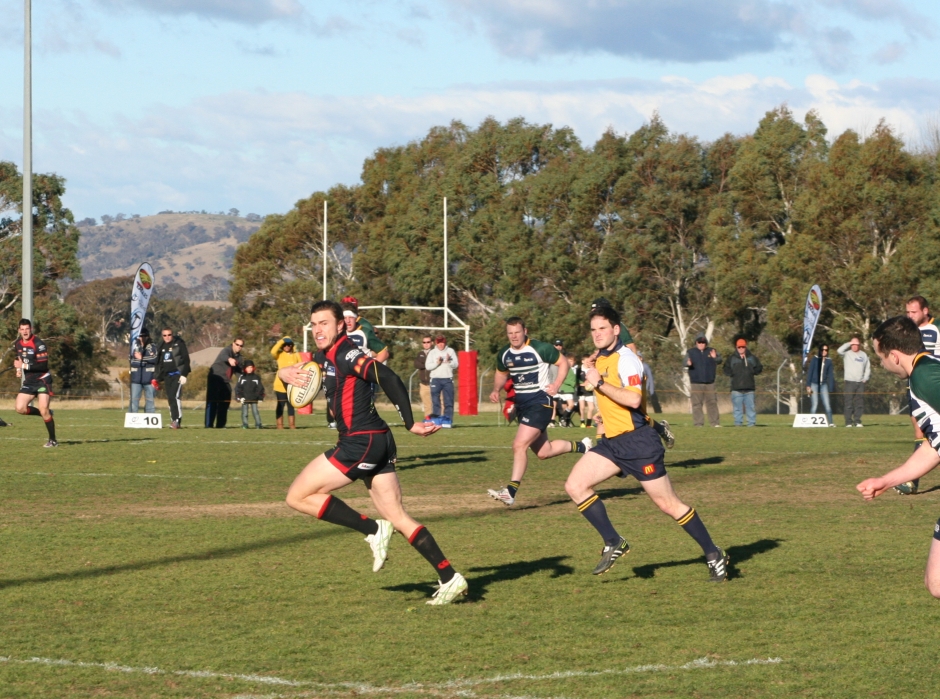 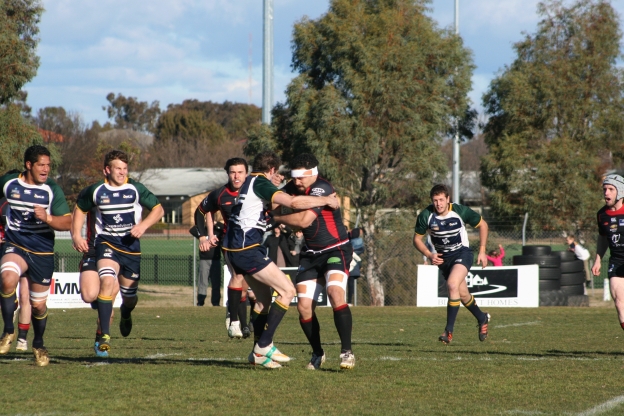 Staff member
Wow Great stuff BJ. Should I combine it with Empires report?

Staff member
Yep, and use the pics if you can. If they don't work I can e-mail them to you.

​
Vikings's Pat Leafa is taken down by Royals' Soakai Tai, left, and Tom Cusack. Photo: Graham Tidy​
​
LEADING the Brumbies to within a whisker of the Super Rugby finals one week, on the bench in Canberra club rugby the next.​
​
Ben Mowen was the ultimate super sub, sparking a second-half revival as the Tuggeranong Vikings held off a gallant challenge from Royals to maintain their runaway lead in the John I Dent Cup.​
​
The ACT skipper shrugged off a gruelling week in Wallabies camp to help the Vikings rebound from a seven-point half-time deficit to win 36-24 at Viking Park yesterday.​
​

​
Brumbies captain Ben Mowen is tackled by a Royals player. Photo: Graham Tidy​
​
''I was carrying a bit of fatigue out of the camp this week, but that's fine, it enables you to get a bit more of a fitness hit in the game,'' Mowen said. ''The club games are a little bit more open so you get a bit more running.''​
​
Run he did.​
​
After spending the opening half on the bench, the hard-charging No.8 got his hands on plenty of ball.​
​

​
Vikings' Paula Kaho, is tackled by Royals opponents. Photo: Graham Tidy​
​
Mowen was held up over the try-line, and was on track for a barnstorming 70-metre effort until he was cut down by a desperate cover tackle from a Royals winger.​
​
There was even an audacious clearing kick - something he'd never get away with under Jake White's watch.​
​
''Jake would cut my leg off if I did that at the Brumbies, so I've got to have a crack at these things in club land,'' Mowen laughed.​
​
''There's some great footballers in the Canberra comp.​
​
''The Brumbies guys started their allegiances early on in the year and we're all enjoying that rivalry at training.''​
​
All Brumbies players not on the injured list turned out in the John I Dent Cup yesterday.​
​
How many games Mowen plays for the Vikings depends on whether he's retained in the Wallabies squad when it's amended tomorrow for the next batch of training ahead of the Rugby Championship.​
​
The Royals were on the verge of causing a major upset until the Vikings scored twice in the final 10 minutes to break the deadlock, to the frustration of Royals coach Craig Lesberg.​
​
''A few errors and ill-discipline proved pretty costly, but it was nice, we were in it for a vast majority of the game,'' Lesberg said.​
​
''It was certainly our intention to be nice and physical and put some pressure on at the breakdown, I think we achieved that.''​
​
AT A GLANCE​
​
John I Dent Cup: TUGGERANONG VIKINGS 36 bt ROYALS 24 at Viking Park; GUNGAHLIN 35 bt UNI-NORTHS 0 at Nicholls; WESTS 52 bt EASTS 7 at Jamison Oval.​
​
​
Read more: [URL='http://www.canberratimes.com.au/rugby-union/union-news/super-sub-mowen-sparks-vikings-20120728-233nx.html#ixzz21xEcraT2[/quote']http://www.canberratimes.com.au/rugby-union/union-news/super-sub-mowen-sparks-vikings-20120728-233nx.html#ixzz21xEcraT2[/URL]​
Click to expand...

Bugeye said:
Grant will these props qualify for 4th grade in the finals?
Click to expand...

Hopefully they all will, may need an injury dispensation for one fourth grade prop.
G

Jake White has attracted quite a lot of praise in and around local rugby circles for his work with the Brumbies. However, his support for local club rugby in Canberra should be applauded with Brumbies players taking the field with local players, bringing a touch of class for spectators and competitors alike to enjoy. Thank

Staff member
Hi guys. We are a bit short on coverage this weekend. If you're going to one of the matches and can help us out with a short match round up we'd love you input. Even jotting down the number of the scorers and kickers will help.
Thanks Sully.

Which means next weeks finals matches are:
Major Semi on Saturday is Tuggeranong vs Wests
Minor Semi on Sunday is Gungahlin vs Queanbeyan

Both games at Viking Park

Thoughts on the Macdougall Medalist in 2012?

Staff member
Which players have been linked to an interstate Super Rugby side?

As for who may attract attention - someone from the Vikings?

Considering the vast majority are from academies interstate/overseas, and absolutely killing it in the local comp, it wouldn't suprise me to see them attract attention.