swingpass said:
so if you were QC (Quade Cooper) sitting in the stands last night, where would you go next year Reds or Rebels ? who has the more potential in the back division and more importantly who has the forwards to provide go forward ball. tough decision (money aside)
Click to expand...


Who has George Smith?

Brumby Runner said:
Who has George Smith?
Click to expand...

Who has Sean McMahon?

I'm looking forward to that battle next year.

genuine question, not a Rebels bias over Reds thing. personally i'd go where the forward power is or will be.

.....fer Christmas with his rellies.

swingpass said:
genuine question, not a Rebels bias over Reds thing. personally i'd go where the forward power is or will be.
Click to expand...


So you go to the reds

The torpedo said:
So you go to the reds
Click to expand...


Yes i'd go to Reds too with the caveat that they need a coach. also depends upon who the Rebels have up their sleeve as replacements for Thomson, Jones, Fuglistaller. QC (Quade Cooper) may or may not be privvy to all of that.

Staff member
The Rebels have signed Tyrel Lomax from the Brumbies.


When we have a game in Antarctica and than the next week in Dubai?

KevinO said:
When we have a game in Antarctica and than the next week in Dubai?
Click to expand...


yeh then i'll be watching on the latest "device", TV being obsolete by then. Google glass everyone ?

Higlander 35, is Toolis a good get or just another NH journeyman who cant get up to pace with Super rugby ?

Difficult to say, primarily because of the twin aspect, i.e. every comment that gets made about them is in relation to the other Twin.

Ben is without a doubt the more talented of the pair, that's why he's first choice alongside Grant Gilchrist, and Alex was kept outside the best 23 by former Shark Anton Bresler.

But he's got the skillset to potentially translate into a good Super Rugby Player. He had his best NH season too, despite having little support at times in the locking department (due to injury) and clearly was "homesick".

It seems a good moneyball signing tbh. He still has quite a high ceiling, and 2 years gives him a bit of time to chase it. But if the best of the current crop of available locks are all looking to sign elsewhere (Matwijow, Phillip etc.) and we don't rate the group behind them, he should be more than capable of holding down positions before we can develop an U20s boy or chase someone OOC overseas/domestically (e.g. Trevor Hosea, Hugh Pyle and say Blake Enever)

Staff member
So looks like Dan Hawkins is heading back over the ditch. Other SM posts tend to indicate the same thing. All bets on Asquith and Placid now. 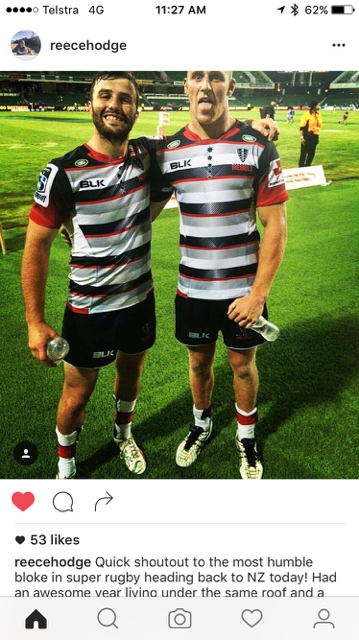 Sent from my iPhone using Tapatalk

I assumed from this post from Laurie, Paul was going...

Staff member
Yea, saw that too, but wasn't sure. Reece's post confirmed it I guess

A shame, I liked what I saw of him.

Agree, would have liked to have seen more.

Staff member
Actually, hang on. Just switched my brain on.

One is for Asquith, one is for Dan. Please tell me they aren't both leaving? RebelYell, care to clear this one up for us?