Balmain Subbies said:
Scots 3 ruled out. The College are definite underdogs against the Catholics in PINK and Blue
Click to expand...

Seriously, this is a great shame. We all want both schools at their best.

Botha is a huge loss for Scots but if Bokenham does not play for Joeys then pretty much the same.

I think the loss of Botha is bigger

Not because Botha is a better player, but instead the quality of joeys 2nds

I reckon if you put the joeys 2nds v joeys 1sts, and u just made 2 changes

However will still be epic... and this win brings in an element of chance

Who can kick better, who can adjust line outs, etc

It’s going to be gladiatorial... and Look forward to seeing the winds effect...the X factor

Botha was out for 60 mins of last weekend match. The scrum was not as lethal but still effective, the replacement was a young big bopper!

If this wind keeps blowing it gives an advantage to Scots. Joeys don't as a rule adjust their style of play to the elements. In the recent past I've seen them play in a howling gale at HH and refuse to kick when running with the wind and pay the ultimate price. On another occasion they continued to play a wide running game in torrential rain and also came second.

Quick Hands said:
If this wind keeps blowing it gives an advantage to Scots. Joeys don't as a rule adjust their style of play to the elements. In the recent past I've seen them play in a howling gale at HH and refuse to kick when running with the wind and pay the ultimate price. On another occasion they continued to play a wide running game in torrential rain and also came second.
Click to expand...


That was under a former regime of coaching. The new "management" have modern methods and being "adaptable" is one of them.
This was seen in 2018 when Joeys changed their game style when it was obvious that what had worked well for so many years was not cutting it. They play a more modern game now which is designed to negate the size advantage some schools have over them. Anyway, time will tell. 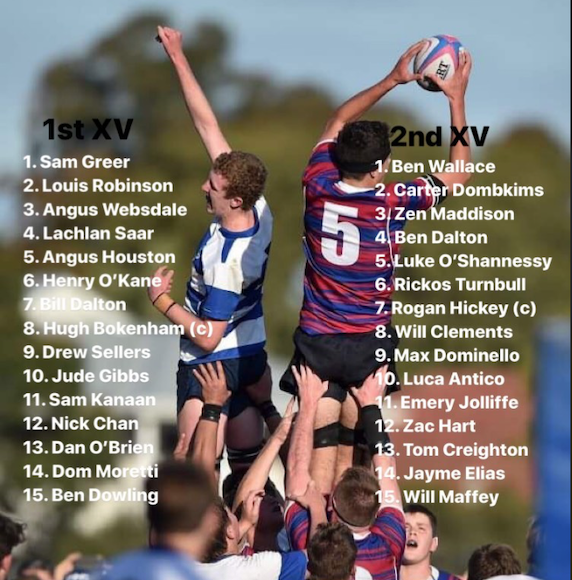 
If this real, then the Joeys captain is risking too much to play.

Joker said:
If this real, then the Joeys captain is risking too much to play.
Click to expand...


Reports were a compound fracture of the thumb. If that's the correct diagnosis then he shouldn't be on the field.

Morning lads. The chatter is very quite of late, would appear with it all on the line the souls of this thread wait in anticipation. As the mist rises before a battle the nervous tension can be felt in the air. Good luck to all the boys playing their last game for their schools that have given their all!

Quick Hands said:
Reports were a compound fracture of the thumb. If that's the correct diagnosis then he shouldn't be on the field.
Click to expand...


If it were compound he would have left the field straight away, and we would have seen blood or bone. Obviously just 'sensationalist journalism'!

A sunny and chilly morning at Hunters Hill with a current "feels like" temperature of 1.9 degrees.
Expecting 17 degrees later in the day. RUG UP! Scots should leave their "skirts" at home.
They should not be worn in this temperature lassies.

Undefeated season for 10th XV with 46 to 0 win over Cranbrook 5ths.
J

Well boys - my experience says the side with the best kicker will win.
J

Black & White said:
Well said and I fully agree, Rippa. It's not about the amount of money earned, but how parents spend it. My parents put me, my brother all through Newington as well as my sister(MLC Burwood) all at the same time. But in order to do that, both parents worked full-time and my father had a second job as a TAFE lecturer, teaching three times a week, after his day work. He rarely came home before 10.00 PM on those nights.


My parents never had expensive holidays, drove second hand cars and while we wanted for nothing and enjoyed a middle class life style, it was a humble and unpretentious existence.So they saved regularly and spent wisely. Such an existence is not uncommon at Newington and I have been told by a former Deputy Head of School, that 80% of parents both work to achieve attendance at Newington. A fact that the school is immensely proud of regarding its community and identity.

This is also in keeping with it's outlook that is egalitarian, inclusive, and accepts diversity. As a school Newington is less "Up Itself" and attracts a cliental that is down to Earth, pragmatic and lives in the real world. I am sure all schools have have such parents, but Newington more so. Joeys also have a somewhat similar outlook.

Dragon Man, Benjamin Disraeli a 19th Century British Prime Minister, once said that their are statistics, statistics and then dam lies. Your assessment is too heavy on statistics and lacks a human dimension to it. Its this human dimension, based on love for ones children, the desire to work hard and make financial sacrifices.This is the reason why parents are able to send their sons to Newington. I suspect ,however, this approach is not confined Newington, but each everyone of our GPS,CAS and ISA Schools.
Click to expand...

Yes and no - my experience looking back on the last 10 years with son wearing black&white tells me we would have preferred to see him in cerise&blue. Parents generally way friendlier and sociable - my son may have had more friends and less bullying.