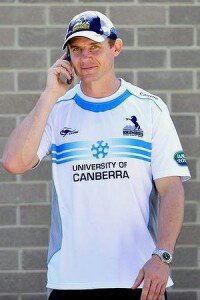 Braveheart81 said:
Because they've already got him in their squad.

Unless they sign an experienced player it seems more likely Wells will be a shot to fill a gap in the back row than an uncapped/unsigned youngster like Perry.

Sent from my HTC_PN071 using Tapatalk
Click to expand...

I'm certain they will be recruiting another back rower for next year.
There are plenty of squad members in each franchise that see little or no game time in the years they are contracted.
Peterson in the Tahs is a good example,as is Iona at the Brumbies.
You didn't answer the question as to the highest level Wells has played in 15's.
Isn't he untested?

I like to watch said:
I'm certain they will be recruiting another back rower for next year.
There are plenty of squad members in each franchise that see little or no game time in the years they are contracted.
Peterson in the Tahs is a good example,as is Iona at the Brumbies.
You didn't answer the question as to the highest level Wells has played in 15's.
Isn't he untested?
Click to expand...

He played NRC for North Harbour Rays in 2014 before he joined the Aussie 7s program.

I'm sure they'll sign another backrower next year as well because they will be losing one from their current squad.

The only thing I was questioning was whether a player (specifically Rowan Perry) who is a year younger than Wells would be likely to come into their squad next year to play 7 ahead of a player they already are investing time and money into.

They may decide to contract an experienced 7 to replace Pocock but I doubt it. I tend to think they will use Butler and potentially Wells there and recruit a younger guy for the future who is less likely to be involved in the matchday squad.

Wells has joined the Brumbies touring party over in South Africa so they must think he's reasonably capable. Not sure about his other 15's experience but I think he played in some of the Brumbies pre-season matches?

I'm pretty sure the Brumbies will be recruiting a specialist 7.
Maybe with a season with them will give them some comfort to give him the opportunity.
I just thought your original post was overly strong in assessing his prospects for replacing a world class 7.
Time will tell

Brumby Runner said:
I agree with Perry. Probably shouldn't have let him go looking for other offers. I understand George has signed in Japan again next year. Probably wouldn't be available.

Jarrad is a stand-in 7, more at home at 8 where atm he is backup to Ita Vaea. No other 8 really in the picture as far as I can see, so would be better imo to keep him in that role. I really think Killingworth's aggressive game would be well suited to the Brumbies and that he would fit in fairly seamlessly.
Click to expand...

There's no doubt he'll be playing there next year with Pocock away.........

Smiler or Wells then possibly comes in as backrow cover on the bench.

The can still sign a rookie like a Perry or Penca for a year to develop them.

One thing that could be worth a discussion; is Super Rugby in Australia mature enough to have "on-loan" players like in soccer. Perfect opportunity for it.

There's no way we'll recruit somone as an obvious replacement for Butler, and with Pocock gone for only one season I can't imagine anyone being brought in long term either.

Loans do happen in the NH. Currently Glasgow have loaned out Kieran Low and Mike Cusack to Saracens and Newcastle respectively, plus had Rory Hughes and a number of academy players loaned out to the Scottish.

Problem is squad sizes IMO. I mean Glasgow have a squad about 45 strong before you even include the Academy boys, who are on rolling contracts. George Horne for example, the 5th string/academy halfback is happy to go on a season loan to ensure he's getting some first team footy. He's beyond U20s, he's still going to have a place at Glasgow next year, and he knows when Mike Blair gives up the goose in 2017, he's first in line for the replacement spot.

Whereas you've got 35 man full time squads, and loosely defined development, academy and reserves squads. I don't see coaches and teams being willing to let any full timers go unless you had say 7 fit props or something. And the other non-full time players would likely jump through hoops for even a short term deal. Don't see it working under current system.

RE: backrow replacements, Wests Tigers have let go of Joel Luani. Pretty sure he's playing for Eastwood. Wouldn't be surprised if he turned up at one of the franchises soon.

Staff member
^^ Luani has been named at 12 in Eastwood 2nd grade team for the opening round of Shute Shield 2016. Either a gentle transition to Rugby is in place, graduated return from Team Rehab or the Woodies don't rate him much. Blake Sutton has been preferred at 12 in the Eastwood First Grade team.
http://www.sydneyunirugby.com.au/team-list.html

Off topic, but does any else miss the actual Brumbies jersey?

Off topic, but does any else miss the actual Brumbies jersey?
Click to expand...

Nope. They're doing pretty well in the current ones

Merrow said:
Nope. They're doing pretty well in the current ones
Click to expand...


So It was the jersey's fault!! Explains why the Tahs are having skillset Tourettes...

topgun said:
So It was the jersey's fault!! Explains why the Tahs are having skillset Tourettes.
Click to expand...

Edit: the part about the Tahs having skill set Tourettes that is.
C

I would rate JB over many of the players mentioned. He's already tried and tested as well. He's trained and played hard and earned his spot IMO. Brumbies have spent 3 good years developing him also. Wells has been contracted for 1 year but I think he's still struggling a little with getting his head around the 15 man game again after playing 7's. He is still a work in progress

Butler out for 6 weeks Ita flying to SA

Sent from my SM-G930F using Tapatalk

I accept Butler's value as a fill-in No 7, but we will be losing a back rower, who just incidentally is arguably the world's best, and we should be recruiting another one to back up those who remain. I would like to see it be a specialist No 7 just in case of further injury.
C

Not saying that its not sad news we are losing such an incredible player for a year, but I don't see the point in not at least trying to develop further some of the boys they already have who have proven worth at 7. After all everyone was concerned when Cheika decided to use Pocock at 8 going into the world cup and look how awesome that turned out to be. How can players develop a speciality in a position if they can't spend enough time there. JB made the most of his time while Pocock was injured at 7, and received some damn good awards while he covered for him. I still feel that JB didn't get enough time to really prove his worth there. Its good that he can be so versatile. I think he would give 100% in all 3 back row positions. Im not saying that Michael Wells isn't a good player but there is a certain amount of respect that surely must be given to players that have already earned their stripes so to speak!!
T

What the hell is going on at Brumbies HQ, I thought this Jones fella was a weirdo when he lashed Moore after signing with QLD, and comments like this have reaffirmed that opinion.. It sounds like he is threatening to take the Brumbies down if people keep pressuring him:

“If it persists, it’s not a veiled threat it’s a very real threat, I only know how to act and that is you can’t fight half a war,” Jones told ABC Grandstand.

“So if I go to war, it’s going to be ugly and there are going to be a lot of people who get burned by it. I desperately don’t want to do that, so all I’m asking is for the people out there who are having a hack at me, they know who they are, back off.

“I think this cancer that’s currently affecting us is only bad for the Brumbies and unless it’s turned around, is ultimately going to be terminal for the Brumbies. You just can’t withstand this stuff perpetually, it will eat away at the organisation.”

“It will have a major impact on Australian rugby, because if the Brumbies cease to be an entity, which is one of the very foreseeable outcomes – and has been a stated outcome of some of the people having a hack at us – if that is allowed to happen, the ARU will be in default of the SANZAAR agreement, because they are required to field five teams every week.

“And if this organisation folds and goes into administration the ARU is in default. They are big stakes games that a lot of these guys are playing, and it’s fairly irresponsible of most of them to do it. They are looking at self-interest rather than the interest of the organisation. I’m trying to avoid the fight – I’ve been taking hits since December, I weathered the storm, and it’s the same guys again.”

Sent from my iPhone using Tapatalk