Martian Manhunter said:
Do you think it might have something to do with the coaching. I hear that the head coach used to be head coach at Sydney Grammar and had little success there. I don't believe that they have any shortage in talent so there must be something else afoot.

The Director of Rugby is not the coach of the 1st XV however he is accountable for the Newington Rugby Program and the results it produces.

I agree with QH, Talent is there, but not being developed.

I used to enjoy the Blues Brothers movie when they were putting the band back together.
What a hoot.
M

Quick Hands said:
Indeed you are correct and he's running rugby at Newington I suspect, along similar lines to what he did at Grammar and we're getting Grammar like results.

You'll note how Grammar have improved since he moved to Newington

Talent is there, but not being developed.
Click to expand...


You’re right, the talent is there and definitely not being developed by the school at all. The school has never developed the talent of the boys, only the performance of the team as a whole. If the boys want development its something they need to seek out themselves because they’re not getting it from the school, which is what i believe a number of the boys have done. They haven’t had great player combinations in key positions for many years, and their lack of foresight is now bearing dry fruits.

Newington will struggle this year, but they may come good next year....just maybe.....if boys don’t leave the program after this year. There are some grumbles amongst the ranks and many boys (who were previous in the As and Bs in former years) have opted to not play at all this year.

I disagree that the previous DoR was fantastic, he only cared about the 1st and 2nd. I understand he was replaced because of his poor win/loss record and it’s said that he only wanted to play lesser graded teams in the lower grades to boost the win/loss ratio. the current DoR seemed promising at the beginning, and he’s taken a great interest in the school as a whole (plus the junior campuses, which no one has done previously) and not only focusing on 1st and 2nd, although it seems he’s much the same as the former one. And he doesn’t appear to have the support of a majority of the boys, is the mail that I’ve received.

It disappointing and Newington will struggle this year.

Side note: i heard current DoR moved from Grammar because it wasn’t a “rugby” school and he wasn’t able to implement the programs that he wanted that would allow Grammar to progress.

For the early risers, this morning the Riverview 10th XV defeated their Oakhill peers 24-7 in a physical and entertaining clash at Lane Cove.
M

Love2Scrum said:
I’m led to believe that there are 8 changes to the Newington 1st XV team for tomorrow’s battle against Barker College due to the injuries sustained against Waverley last week. 12 of the 15 boys are in Year 11.

Good luck to both schools and may the best team win.
Click to expand...


Not entirely correct. There were a number of boys who were out of contention even before the Waverley game, but agree that they don’t have a full contingent on the field. 5 were lost due to concussion against Waverley (some were friendly fire!!)
M

Love2Scrum said:
The Director of Rugby is not the coach of the 1st XV however he is accountable for the Newington Rugby Program and the results it produces.

I agree with QH, Talent is there, but not being developed.

Wow, they’re some disappointing stats. Didn’t realise it was so poor.

Just FYI, if people are wondering why there are bugger all King’s teams playing Joeys today it’s because they had to reschedule cadet camp. It was originally scheduled for that week of flooding rain last term and the army rightfully closed the Singleton base that week. Having missed it last year due to Covid they didn’t want the boys to miss it again so this week was the best compromise. 1sts, 2nds and 3rds players came back this morning so those teams haven’t trained together, and everyone else is still there. 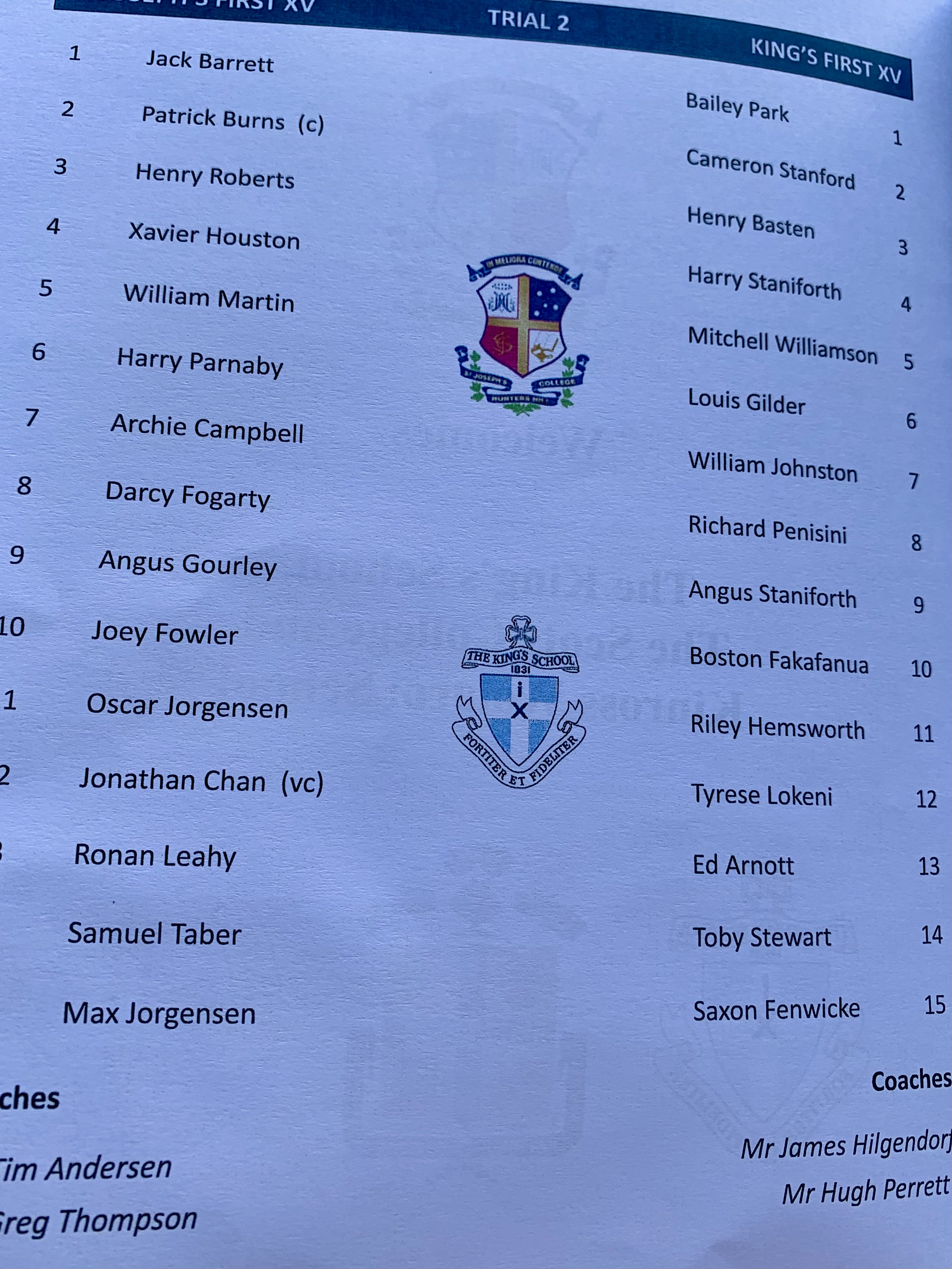 Joeys leading 12 nil against Kings after about 15 mins

Drop ball by Joeys deep on attack and Kings winger picks it up and takes it to the house. Joeys 12 Kings 7

Well worked try from Joeys at the restart, to 14 for his 2nd, Sam Taber - he looks quick and has a nice in and away.